As far as returning symbols go, nothing quite beats the hat. There it was on the back seat of that old warhorse, the Aztec (which sort of strikes me as another icon of a simpler time). Walt appraises his hat and you can’t help but be reminded of the power, the comfort, the strength, he summons from it. Breaking Bad’s latest episode spirals off from there. With no new external force to chaff against (the DEA is not even in Walt’s periphery at this point), Mr. White is faced only with serious internal issues from two women in his life; one he knows very well, one he, perhaps dangerously, does not. 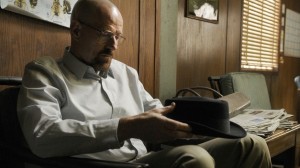 The return of the old ways.

Back in Season 4, when Skyler was finally let behind the curtain to the wonderful world of Heisenberg, it was a clear turning point. As my cohort, Paul, has opined, it started Skyler on a path of involvement and implication. While her motivations were originally of a self-preservation mentality, her decisions quickly enveloped her in Walt’s increasing dangerous and deranged worldview. She continues to be a woman trapped and no amount of bold proclamations from Walt (I am the danger! We do it for the right reasons!) have been able to convince her of freedom. Now, the dim shadows of the White house no longer conceal warm colours and comfort, but rather, menace. Skyler’s initial response had been to shut down, to play it stone faced. Yet this episode actually revealed that Skyler had not been catatonic; she had been calculating. Remember, this is the woman who hired a man to pretend to be an environmental assessment engineer so as to force a car wash owner into selling. She can deal.

On the business side of things, there is another woman, Lydia, who, while trying her damnedest, just cannot deal. Ably brought to life by actress Laura Fraser, Lydia definitely thinks she has been left holding the bag of the old regime. The big guys (Gus, Herr Schuler) are gone and her solutions for extricating herself from her predicament continue to fail. Hell, she was guilt-addled bullet from Mike away from death two weeks ago! I’ve enjoyed how the Lydia character has been employed as the cog in a larger machine that she appears to only now begin to see as a whole. Much like Skyler, Lydia feels increasingly trapped and she knows that no amount of methyl-amine is going to change that for her.

The shades don’t make you cool.

As this episode concluded, we saw Walt gloating over Skyler. He believes he can sway anyone to understanding his side of things (using his manipulation of Jesse as a great example. And no doubt believing he has control over Mike). Perhaps he is right about Skyler; he has an answer for all of her possible plans. But while Walt can rework and repel any of Skyler’s gambits, he only really knows half of the story. And while Lydia, and the ‘legacy’ costs, may be just some vague holdover from the old organization, they’re also an old symbol, too; a reminder of the very real unknown danger that awaits.

The newest season of Breaking Bad has certainly held back on the action and increased the tension.  There are no great car chases, dissolving bodies, deadly standoffs, or explosive meth.  The hardened, and often psychopathic, criminals of Crazy 8, Tuco, Fring and others are gone.  All that remains is Walter White, and he knows it.

Although “Fifty-One” centers on Walt’s birthday, the supporting cast gets much of the focus in this episode, especially the female characters.  Skyler, Lydia, and even Marie experience feelings of terror brought on by men who seem to have total control.   Skyler begins this episode like any other this season; she is nothing more than a prisoner in her own family and home. Even brushing teeth with her has become an unpleasant experience for her (and us).  For poor Lydia, Mike has control over everything in her life ever since he gave her a second chance in her home in “Madrigal” (what a sexist).  Similar to Skyler, Lydia’s life is a shadow of what it used to be thanks to the actions of men around her.  Most importantly, Lydia and Skyler both became involved in criminal enterprises where others control everything.  Including, they believe, if and when their life will end.

Interestingly, Marie shows signs of being our most empowered female character so far this season.  After the ordeal with Hank over from last season, Marie is back to her true meddlesome and chatty self.  However, when Marie spills Skyler’s ‘secret’ (without much pressure, really) she is freeing herself from Walt’s attempt to control the narrative of his marital strife and in return, Marie’s life and family.

Anna Gunn (Skyler) is truly magnificent in this episode as a seemingly defeated woman walking helplessly into the White family pool.  Pivotal moments and decisions have occurred in that backyard and this event was no exception.  Water is often used symbolically by writers to represent a cleansing or rebirth.  It can often represent a type of baptism or entrance into a new way of life. This holds true for the Skyler White character as her emergence from the pool gives way to a new woman who is tragically aware of her hopelessness but pledges that her children will never know the pain she feels.  So, after much of the season as a lifeless and fearful woman, Skyler takes action, no matter how futile she admits it may be.

In the haunting scene of Walt and Skyler’s argument, she admits to Walt that she has no power, no control.  However, she will no longer be a silent victim of Walt’s very real abuse. She has no power, no plan, and no real options as Walt points out proudly.  However, she has made one pivotal decision that Walt has no response for.  Skyler declares that her only course of action is to wait hopefully for Walt’s cancer to return and his death to follow.  Of all weapons against Walt that Skyler has lost, she has found something Walt cannot control, her own hope.  Used exactly a year ago to hope for Walt’s survival, now is used to hope for his end.

Early in this episode, Walt tells Skyler that ‘life is good’ and that he wants ‘to look forward for once.’   Intelligently, Skyler’s last weapon against Walt only reminds him of his past and an absolute end.

That is one terrible birthday.