By: Daniel Reynolds and Paul Andreacchi

With only two episodes remaining in the first half of this final season, ‘Buyout’ reveals our major characters at critical breaking points.

Mike is experiencing a legal breaking point as the DEA is constantly watching his every move.  Our favourite captive cast member, Skyler, is at an emotional breaking point and seemed nearly on the verge of revealing the truth to her sister.  Jesse Pinkman is at another breaking point, and fittingly it is a moral one.  Our consistent moral center of the series refuses to stop ‘feeling’ and get over the murder of an innocent child.  What do all these breaking points have in common? Walter White. His actions have dictated the lives of all these characters and have led them to these breaking points. More importantly, he remains the one obstacle to the possibility of ever overcoming the tragedy that has become their lives.  Walter White is oblivious to this of course, because whether it was cancer, financial ruin, Tuco, or Gus Fring, Walt has met his own breaking point and destroyed it.

“Finally we have no one to answer to, but ourselves …”

When attempting to lure Walt into a multimillion dollar buyout, Jesse reminds him of his first intentions upon entering the drug game: 700 000 dollars.  That amount of money was going to assure Season 1 Walt that no matter his health, his family will not be burdened. Walter was truly committed to the contentment of others over himself (Check out Seasons 1 and 2 for ample evidence).  Fast forward one year and Walter has become the obstacle to the contentment of others. The opposite of everything he wished he wouldn’t be when he learned of his diagnosis. This hypocrisy is completely lost on Walt. He has become not only the source of inconvenience, but the source of all pain and suffering to all that come into contact with him. Hank, Marie, Skyler, Jesse, Mike, Walter Jr, and of course, all those departed are buried examples of Walter White’s new legacy.

“This business is all I have, and you want to take it away from me”

These words remind us that Walt is not totally oblivious to the road he has taken. He realizes that the meth business is all he has left to restore the pride that Gray Matter ‘stole’ from him. Sadly, family and money will not satisfy him. Consistent with the origin of this story, only the restoration of his pride will see Walt’s contentment ‘complete’. After all, his contentment is the only thing that has not been made impossible, however twisted his definition of it has been constructed.  He robs other people of contentment and has drastically made his own version nothing less than a tragedy.

Nevertheless, in Walt’s twisted world “everyone wins”. More importantly, Walt believes he can experience a poetic justice of sorts where he is the winning hand in a multi-million dollar ‘buyout’ of Jesse and Mike.  Walter White’s pride will be restored, which is all he ever wanted. However, as Breaking Bad has shown its audience, it is not a story of restoration, but one of degradation and destruction for any character in the series. This may not turn out to be an accurate assessment with many episodes remaining, but Walt seems to be working hard to make it the truth.

For what it’s worth, that was my favourite cold open for Breaking Bad in awhile. The detail of that sequence was perfect. Look at the stark cinematography, matched with that chilling music, illuminating the actions of these men in a garage, working, their expressions haggard. Feel the growing discomfort as you realize that the dismantling of that motorbike is just the pre-show, the precursor to something much more macabre. 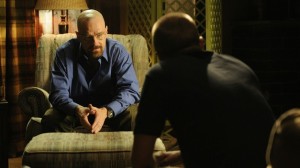 The family still among the living.

Remember last week? We were having a great time! Bill Burr was cracking jokes about engineers, Jesse was yelling ‘Bitch!’, hell, I’d like to believe even Mike was enjoying the high stakes hijinks (though, he probably was not). Breaking Bad was having its version of fun. Sure, it was still full of complete white-knuckle terror, but at least we got to enjoy the ride on the roller coaster for a time with Walt and the gang. Now we are stuck with only the hangover.

So they get rid of the kid. And now the DEA is really, really keeping an eye on Mike. Jesse is tired of paying the psychological tolls and Mike just wants a way out, away from Walt. I like that the show even still has a use for Saul, even if the moral depths to which the ‘heroes’ have sunk far out paces his ethical flexibility. Ah, but the thing of it is though, it’s still about family. We learn that Todd has an uncle, we know Mike has a granddaughter; depressingly, Jesse wants a father, and of course Walt wants his kids. And that boy on the motorbike, well, he was somebody’s son, too. 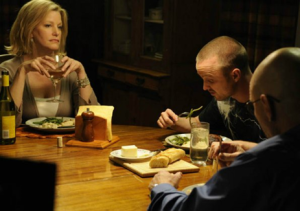 Talking about beans since they certainly can’t talk about their day.

How best, then, to capture the state of the family on Breaking Bad then to host a family dinner, the staple of communal living. In his classic digressive style, Walt tells Jesse a story of his past. While he is too proud to divulge the ‘personal differences’ he felt in those early days of Gray Matter (on the losing side of a love triangle), he clearly wants Jesse to know of the life he should have had, the destiny and family that he feels were taken from him. Instead, we see the family he is left with. There is Skyler, the wife he has trapped, and as Walt says on the phone, nobody else is at the house since his kids aren’t coming back. The guilt is laid on pretty thick here, another family staple.

Despite all this, we know from the first episode of this season that Walt will eventually leave his family behind. He’ll be on the run somehow, in a different state, with a different appearance. We know this. I couldn’t help but feel a dash of pity though, realizing that Walt’s drug business is all he has left. His family is broken, his past is all regret, he looks forward only to his empire… but I doubt anyone will win.