For the past few months I’ve been making time to sit down with my dad every now and then to watch the entire series of HBO’s The Wire, a show many fans and critics consider to be the greatest series ever produced. Having just finished season five, the final season, I had some thoughts that needed writing.

My dad has always been a fan of police shows and court procedurals, so I had a feeling ‘The Wire’ would fall right into his wheelhouse. Without knowledge of his full range of options, he has often been stuck watching sub-par programs like CSI and Criminal Minds (I don’t wish to insult anyone who watches those shows, truly, but they’re just not on the analytical and intellectual level of The Wire). I had watched for the first time in university, so for me this was a second chance to dissect, interpret and understand the show’s many interweaving storylines.

I spent my free time as a kid alternating between running around the neighbourhood with a gang of hoodlums, and on the couch, eating dinner, doing homework, and yes, watching a ton of television. My dad worked in the restaurant industry, still does actually, and was often away from home in the evenings. But I still remember sitting with my family on our skinny, grey, low-cushioned couch (the kind of 80s couch that begged the name ‘chesterfield’), watching episodes of The Simpsons, Married With Children, and, of course, Seinfeld.

I’ve also shared sombre moments with him on that couch: coming home from Grade 10 one fine September day to watch coverage of the most serious and frightening moment of four lives, the 9/11 attacks.

Many parenting experts will tell you that watching too much television with your kids is a no-no. There may be some truth to that, but moments of TV watching with my dad are some of my fondest childhood memories. And since I got busy with my grown-up life, and he got even more busy with his, we had lost that opportunity to connect. So The Wire was the perfect chance to catch up.

Fair warning: If you have never watched The Wire, there are lots of spoilers below.

Focusing largely on the drug trade of Avon Barksdale and the intense, complicated police investigation into said drug trade, season one was the perfect launching pad. Early on, dad struggled to pick up some of the street lingo and Baltimore slang, but was soon drawn in to the complexities and real humanity created in each character. Stringer Bell was the first drug dealer character that had been portrayed as thoughtful and respectful (at least to some degree). Omar was a gay criminal who robbed drug dealers. There was nothing like this on TV back then, and even ten years later it’s hard to see many parallels. If Twitter had been around during The Wire, you can be certain that the viewing audience would rival what we see today for shows like Game of Thrones and Breaking Bad. Some masterful scenes from season one include the chess scene, Wallace’s man-of-the-house morning routine, and D’Angelo’s “Where’s Wallace?!”.

Greek drug traffickers! Polish dock workers! Season two was made with me and my dad in David Simon’s mind! A sharp right turn away from the streets and onto the docks, The Wire pulled back its lens for season two to show the international drug trafficking trade. This season also shows the jailhouse death of D’Angelo, one of the show’s most gruesome, and intensely sad, moments. Again, what set this aside from most other TV crime dramas was that the traffickers were not crazy, violent, or stupid. They were perfectly sane, reasonable, intelligent businessmen, who treated a crate full of cocaine (or dead hookers, for example) as callously as if they were DVD players. 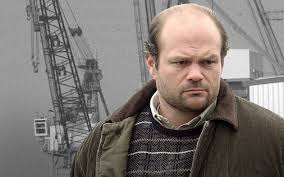 We were very much a working-class family growing up; I was always the last of my friends to have a new video-game system, my brother and I spent entire days playing street hockey or wandering our Mount Dennis neighbourhood, and my dad drove a 1986 Oldsmobile until 2005. So, while we can’t relate exactly to Frank and Ziggy Sobotka’s desperate criminality, we certainly know the frustration of not enough work or money to pay the bills.

Season four is, always and forever, my favourite season. As a teacher, I’m naturally drawn to the school scenes; the frustrating staff meetings, the politicization of education, and the somewhat unrealistic classroom of Prezbylewski. But this season also functioned as a glimpse at the unending cycle of poverty and despair in the Baltimore ghetto. (Or, in the case of Namond, all-too-rare positive outcomes.) This season had me and my dad talking about my career and the endless stream of frustration that seems to come with trying to teach kids to write, read, multiply and divide. Following a group of thirteen-year-old boys, season four showed us how exactly someone can go from an innocent kid to a cold-blooded killer, or in Dukie’s case, a drug addict. Which brings me to my final observation.

Between the end of season four and beginning of season five, dad and I were hit with some real-life drama. My older brother has a long history of substance abuse and mental health issues, a battle he’s waged for over a decade, and one I’ve managed to keep secret even from some of my closest friends. Last year, he was sober and healthy enough to find his own apartment and was living a rather comfortable, if somewhat spartan and lonely life. Unfortunately, as we would soon discover, he was finding comfort in alcohol. Lots of it. Without bogging down in details, he was arrested for something he did while intoxicated, and forced to move back in with our parents.

This leant a new meaning to our Wire-watching routine. Dad was long-ago submerged in the story and characters, but my sitting down and watching with him became cathartic: it was an escape for him from the heartache he must have been feeling. 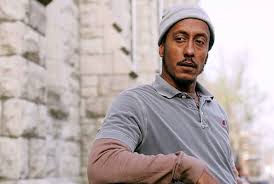 The heart of the series, Bubbles.

Season five is often called the weakest of the five seasons by fans and critics. I can see the reasons why. The newspaper industry is not as engaging as police, drug dealers, and middle school students. But for dad and me, season five was about watching the show’s long-suffering addict, Bubbles, finally gain control over his life. When he climbs the stairs and sits at the table with his sister and niece, clean and sober once again after many long years, dad and I saw a glimpse of the reward that might, some day, be waiting for us.