It takes a surplus of vision, energy and–let’s just say it–money to make a film. One can assume this holds true even more so for making a film festival. It was 39 years ago this week when Bill Marshall, Henk Van der Kolk and Dusty Cohl launched the Toronto International Film Festival–or as it was called then, the Festival of Festivals, a perfect TO sensibility. Now Marshall is in Niagara, Van der Kolk is in Panama, and Dusty Cohl, god bless him, is deceased. Their dream, however, lives on.

This is my tenth year at TIFF, and in that time I’ve been amazed at the changes brought to the festival’s structure and operation. Translation: I got my hands on 14 tickets this year without ever having to wait in an actual physical line. (I did wait in a digital queue, but come on, I was sitting on my couch in my pajamas at the time so it hardly counts.) I should mention that I happen to be a TIFF Member this year, which gets me into package selection and ticket pick-up lines just a bit earlier, but nevertheless, it was a painless experience.

So what are these 14 films? I’m glad you asked. Here’s a summary with the why and why not behind each pick in chronological order.

The cheery countenance of Son of Saul.

Why this Pick: Few films emerge onto the international scene as boldly as Laszlo Nemes’ feature length debut. Shot in shallow focus, so as to draw you into a close relationship with lead actor Geza Rohrig and push back the horrors at the edge of the frame, Son of Saul has been earning international accolades all year in the lead up to TIFF.

Why Not: It’s a grim movie about a man trying to bury a dead boy at a concentration camp during the Holocaust. I’m not exactly starting things off on a happy note.

Why this Pick: We work here with the transitive property. Hany Abu-Assad made the breathtaking Paradise Now plus the heartbreaking Omar. Presumably this equals a compelling film about popular Palestinian singer Mohammed Assaf, who happens to have won Arab Idol once upon a time.

Why Not: I did not read this plot description before picking the film. Arab Idol? Oh no.

Why this Pick: You can keep your goofy Equalizer-like films and give me something like Dheepan instead. The winner of this year’s Palme D’Or concerns the titular Tamil fighter who ends up with a woman and child in Paris pretending to form a family unit in an effort to secure asylum. As if that degree of difficulty wasn’t high enough, Dheepan takes a job as a building caretaker, which puts him right back in the line of fire.

Why Not: Jacques Audiard made a crime film I’ve totally forgotten (A Prophet) and an inexplicable film I can’t forget even if I wanted to (Rust and Bone, some of which I wouldn’t mind forgetting).

Oh Yorgos, what are you up to now?

Why this Pick: The recent Greek film renaissance, centred largely around films involving Yorgos Lanthimos, was one of the more darkly alluring and twisted things to happen in film in the last five or so years. The Lobster (featuring Colin Farrell, Rachel Wiesz, John C. Reilly and Lea Seydoux) is Lanthimos’ English language debut and its premise–involving single people threatened with (metaphoric?) animal mutation–puts it right in that weirdo sweet spot.

Why Not: Perish the thought, but what if Lanthimos works best in Greek and Greek alone?

Why this Pick: At this point, we can acknowledge Hirokazu Koreeda as the torch-bearer for the legacy of Yasujiro Ozu, the master of quiet and contemplative Japanese films. Koreeda’s latest involves three sisters who are surprised to welcome a young half-sister into their midst after their father’s death. Like all of his films, there won’t be many tears or any violence here, but there’s a good chance you’ll be moved anyway.

Why Not: Despite the superlatives usually placed on Koreeda’s thoughtful work, he has a tendency to sometimes get too cute with his ideas while dragging lean stories out a touch too long.

How Heavy This Hammer

Why this Pick: This is local as local gets. Director Kazik Radwanski, Ryerson alum (like me!), goes super close once again with this story about a middle-aged man receding from real life in Toronto while dedicating more and more life to an online fantasy game world. Expect lots of uncomfortable silences.

Why Not: Radwanski’s last film, Tower, was odd and perhaps hard to dive into so maybe more of that here? I’m reaching.

Mountains May Depart (when driving away from them).

Why this Pick: One of my favourite films (Asian or otherwise) of all time is Yi Yi so when I read the description for Zhangke Jia’s latest–which regards China’s economic boom and the effect its had on contemporary families and relationships–I was smitten. Throw in an apparent love triangle and what’s not to like?

Why Not: Having never seen a Zhangke Jia film before, it could be a risk. Comparing any film to Yi Yi is a risk.

Why this Pick: Oh it sounds so heart-warming doesn’t it? A quiet family man, Costi, is drawn into a quaint backyard quest by his neighbour, Adrian, who insists there’s loot buried nearby. I was beginning to wonder, after 12:08 East of Bucharest, if Romanian director Corneliu Porumboiu would ever use his off-kilter sense of humour again. It looks like we may have an answer.

Why Not: I really did not like Police, Adjectif, Porumboiu’s previous film, and one that fulfilled one too many cliches of European films (dry, boring, inscrutable, boring, slow, boring).

Why this Pick: What we’ve got here is a whodunit based on the controversial 2008 Noida double murder case in India. I won’t pretend to know what any of that means. But I do know that Irrfan Khan, my main man-crush, plays the detective investigating the complex ins and outs of the whole deal. Basically, put “Khan” and “whodunit” in a sentence and I’m there.

Why Not: Outside of Khan’s presence (a big one, but still), I’m totally in the dark regarding this film’s subject matter and creative team. We’ll see.

Why this Pick: Too squeamish to take in Lars von Trier’s Nyphomaniac? Why not go with Gaspar Noe’s unsimulated, explicit sex movie (in 3D no less!) instead? That was my thinking, anyway. Allegedly Noe’s latest is about the what ifs of passion and the places (and people) a person can find themselves in as a result of its application.

Why Not: I made it through (and was generally entertained by) Noe’s Enter the Void. But that was really pushing it.

Why this Pick: While a film focused on a troubled family featuring Jesse Eisenberg and a famous, aging scion (this time, Gabriel Byrne) feels overly familiar, the previous work of Joachim Trier suggests something different. His last two films also dealt with common enough sounding subject matter (literary competition, drug addiction) and yet, here we are with Trier as a world-renowned filmmaker anyway. Something is working here.

Why Not: Was it wise to start in on Joachim Trier films by seeing his first ever English language movie? Maybe, maybe not.

Why this Pick: Anna Boden and Ryan Fleck made two of my favourite movies ever–Half Nelson and Sugar–and have since made only one feature (It’s Kind of a Funny Story) that was merely average. Mississippi Grind features gambling, an aging anti-hero who’s down on his luck, and the acting talents of Ben Mendelsohn. I want this to be very good, very much so.

Why Not: It’s Ryan Reynolds as the co-male lead! What do we make of this? Reviews have been great, but who knows. 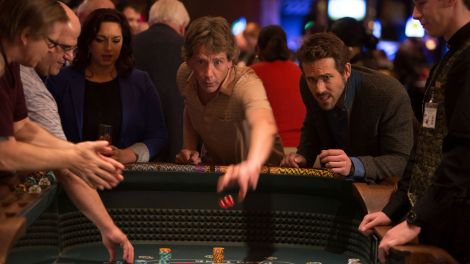 I’ll cast my lot with these dudes.

Why this Pick: If you spend a lot of time decrying the state of films today, with their lack of originality as the main complaint, then there’s no reason not to be curious at whatever Charlie Kaufman has cooked up. Anomalisa, based on Kaufman’s play, portends to upend romantic comedies (and probably romance, too) by dissecting their elements and minutia using, ah yes, stop-motion yarn-based puppetry. How’s that for original?

Why Not: Charlie Kaufman, for all his cleverness, can also make films that, at least after a single viewing, feel completely impenetrable.

Why this Pick: Similar to Zhangke Jia, I’ve never seen any of the celebrated films of Terence Davies. This adaptation of a famous Scottish novel sounds beautiful and moving as a paean to the people and period of rural Scotland in the early 1900s. It goes without saying Peter Mullan is also involved.

Why Not: From what I’ve read of Davies’ work, he may be an acquired taste.

And that just about does it. Fourteen picks, fourteen reasons to see or not see the movies. As always during TIFF, check back on the Same Page for more reviews and feelings on the festival. Oh yeah, and you can see the entire list of TIFF films here.

Just remember, the other most valuable thing you need for both a film and a film festival is simple: time.