Let me begin by saying this: it’s January. Late January, in fact.

Why is that pertinent?

Well, late January is something of a wasteland for the MLB off-season. Most major roster moves have already gone down, but it’s still almost a month until pitchers and catchers report. Theoretically, an earth-shattering trade or signing could happen at any time! But in all likelihood, it won’t for these Blue Jays. Nor does it need to. Mark Shapiro mildly stoked some flames when he was on Prime Time Sports with Bob McCown last week, saying that the team still has financial flexibility, and that he doesn’t feel like he’s ever done adding. In the next breath however, he stressed that what the Jays need is depth more than anything. So a major move is unlikely.

Who knows? All we can do is work with the idea that this club is pretty much ready to rock, despite there being a couple minor tweaks left to make.

One thing we do know for sure is that Manager John Gibbons will be at the helm for the Blue Jays again in 2016. And because I’m a kind, benevolent sort of fella, and because it’s January and nothing else is going on, and because I love the man frequently compared to Boomhauer, I decided to give him some free advice about how to employ his roster in a more, uh, unconventional manner this upcoming season.

But how to gauge his (probable) reactions?

Everybody knows Gibby likes a good lean. It can be forwards or backwards. In the dugout, in his office, wherever. If you can lean on it, Gibby has done it. He likes to maintain a strict 45 degree lean at most times, pushing the structural limits of most chairs and/or his spine. Oh sure, sometimes he’ll go elbows on knees or stand on the dugout steps, but the lean is where his bread is buttered.

Something I’ve noticed during interviews and post-game press conferences, is that more riled up he gets about a question, the further he moves forward in his chair. So following that, one can equate rage with a perfectly upright posture. What a window into the soul.

Ain’t nothin’ wrong with bein’ doggone comfortable, is there?

With that in mind, I present to you, the Official John Gibbons Lean Meter.

Have a gander. Assuming he does maintain said 45 degree lean at most times, here is how Gibby adjusts his lean, based purely on incredulity.

A 10 degree decrease: You have his attention.

A 20 degree decrease: He is unimpressed.

Gibby’s take: ‘You musta gone and bumped your head, son!’

A 40 degree decrease: You have offended his Texan sensibilities.

I have four suggestions that the Blue Jays could employ at various points during the upcoming season. Let’s see how Gibby reacts.

This might actually happen, and here’s why. Devon Travis isn’t due to resume baseball activities until April, and while the club can’t speculate on his return date until they see him in action, it’s pretty unlikely he’ll return before June 1st. That gives Goins two full months as the starter at second base, or about 55 starts. As we saw last year, the shoulder injury Travis sustained appears to be a nagging one, though he has now had surgery to correct it. He’ll need days off during the season, even if he does return to full health. So if we pencil Goins in for 70 starts at second base, that wouldn’t be unreasonable.

On the other side of the keystone bag, the Jays employ Troy Tulowitzki, a man with injury history that is well documented. Even if we discount the big injuries earlier in his career and just look at the past two seasons, Tulo has missed 34 and 36 games respectively. If we optimistically assume he misses, say, 25 games this season, and assume that those starts go to Goins, then we’re already at 95 starts. Goins only has four career innings at third base under his belt, but if Josh Donaldson were to hit the DL for a short period when Tulo and Travis were healthy, you’d have to think he’d wind up getting some run at the hot corner. And he actually played 20 innings in the outfield last season, so he could be an option in left, under dire circumstances.

A key to the entire idea is Goins maintaining his improvements at the plate from the second half of 2015. He was spurred by a big August, in which he hit .314/.442/.443, seemingly out of nowhere. He came back to earth a bit in September, posting a .263/.324/.374. Even those September numbers are a great improvement for him, and are definitely playable for a super-sub bench guy. The main thing he had in common in those months is that he was playing every day for the first time in his career, and while his number spiked, he actually had a league average BABIP. He’ll have the opportunity to prove it wasn’t a fluke in April and May.

‘Dan-o, that’s been the plan all along. You ain’t sayin’ nothin’ we haven’t already considered. Damn, I thought these were going to be outside the box, boy! You’re deeper’n there than the last Triscuit!’

Fair enough Gibby. I wanted to start off slow. How about this one?

Use Aaron Sanchez and Roberto Osuna as a tandem

Sanchez was rounding into form before his early June injury last season, having posted four consecutive quality starts, and lowering his ERA to 3.55 through 11 starts. He allowed more than three earned runs in only one of those 11, and while his K/BB ratio was not strong, he consistently induced weak contact and ground balls. His season-long 60.9 GB% bears that out. To those watching, he looked like a guy who was starting to figure it out. The Jays owe it to themselves to see if he can develop the command necessary to be a cog in their starting rotation, as he’s infinitely more valuable there than at the back end of the bullpen.

Assuming Sanchez does get a shot at starting out of the gate, it’s important to limit his workload, to ensure he doesn’t sustain another injury. He set his career high with 92.1 big league innings pitched last season, though he did throw 133.1 across three levels in 2014. With Drew Storen and Brett Cecil very capably able to fill the back end of the ‘pen, I think it might be an interesting experiment to have Roberto Osuna ‘caddy’ for Sanchez. You let Sanchez pitch as deep into the game as he can, with a cap of about six innings (loose of course, if he’s really rolling). When he comes out, you bring in Osuna to pitch multiple innings as a bridge to the back end of the bullpen. During his stellar rookie season, Osuna pitched in 75 games, including playoffs, posting 77.2 IP. He threw more than one inning in 12 of those games, and showed that he was effective in doing so. He’s still just 21 years old and was signed as a starting pitcher; he moved to bullpen as he worked his way back from injury. If he still projects as a starter for Toronto in the long-term, it might be interesting to see if he can handle a starters schedule, even one with reduced workload.

Uh oh. This isn’t going to be good.

‘Listen son, you think you’re the first one ever to come up with a cockamamie scheme like this? The bottom line is that Sanchez needs to make or break it as a starter this year on his own. No restrictions, except maybe some pitch count stuff. Osuna, yeah, he’ll get some extra innings this season, but we ain’t limiting him to pitch once every five days. He’s too valuable and our bullpen just ain’t deep enough! You’re more out of your depth than Sam Jackson in Deep Blue Sea!’

Astute, Gibby. How about this one?

This is a question of options. Ben Revere has been shipped out of town and shouldn’t have been leading off anyway. The Jays tried Troy Tulowitzki and his career .369 OBP at the top of the order last season and it didn’t work, for a variety of reasons. He posted a .227/.325/.373 line over 24 games and never looked comfortable. Josh Donaldson led off seven times, and while he was reasonably successful from a power perspective, his OBP tumbled from .382 in the 2 spot to just .313 hitting first. You don’t want to mess with the reigning MVP. Kevin Pillar has speed, but his bat doesn’t profile well there. Edwin Encarnacion doesn’t run well enough. Russell Martin doesn’t run like he used to and will have quite a few days off. Ryan Goins is a nine-hole hitter. Dalton Pompey is very interesting, but isn’t yet a lock to make the team in left field. So who’s left?

Joey Bats, that’s who. He of the 493 career lead-off plate appearances, in which he’s posted a .264/.356/.464 line out of the position. While he’s been entrenched in the three-hole in recent years, his combination of patience and power would be an ideal fill-in at the top of the order until Travis returns to full health and can set the table for the guys behind him.

Even if you juggle things around with Smoak/Colabello and Saunders/Pompey, doesn’t a line-up that looks roughly like this make sense? 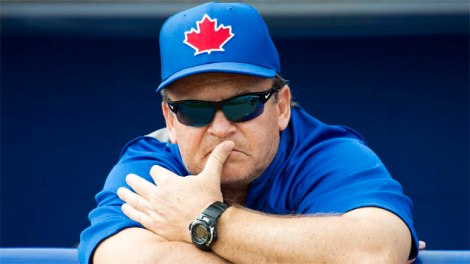 ‘Lemme get this straight, big fella. You want me to take one of the best run producers and home run run hitters in baseball over the past half-decade, and put him in a spot where he’s guaranteed to hit with nobody on base at least once a game? And to follow our eight and nine guys the rest of the gol’darned time? Not to mention the fact that the three-hole is his spot and we’re trying to convince him to stay after this season. Maybe that stuff ain’t pertinent to winning games this year, but these are human beings, Danny, and that stuff does matter to ’em. I see where you’re coming from here, but it ain’t happening unless Jose wants it to happen, and I gotta say, I think that’s about as likely as me swearing off windbreakers!’

Fair enough, Gibby, fair enough. I won’t burden you by asking who you’ll put in there instead. I just think Jose is a viable option.

R.A Dickey should get a shot at closing

Listen, I know this one sounds nuts. Keep in mind, it comes with the following caveats:

If all those things happen, the Jays are laughing regardless. So considering a different role for Dickey isn’t really crazy, is it?

Detractors, yes, I know you’re going to point at how effective Dickey was in the second half of last season, and that even an average starting pitcher is much more valuable than most elite relievers. After his disastrous April and May, Dickey was fantastic in June, July and September, with a middling August thrown in, though even that month featured four quality starts. He ate up 214.1 innings for Toronto last season, innings they won’t be able to replace easily. However, if the three things I listed above happen, things will work themselves out! And there are certain advantages to using Dickey in a late-inning role: 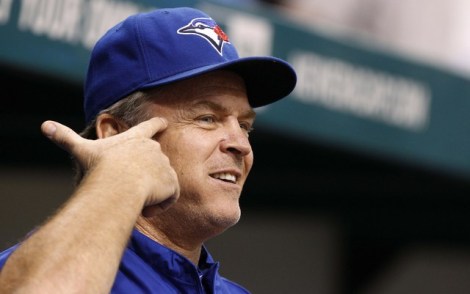 ‘YOU WANT ME TO TAKE MY MOST RELIABLE VETERAN START…unintelligible’

I didn’t catch the last part. But it sounded something like this: