Spain has won the three most recent major international soccer tournaments (2008 Euro Championship, 2010 World Cup, 2012 Euro Championship).  So does this make them the greatest team of all time?

Yes. (And no, it’s not Mexico or Portugal) 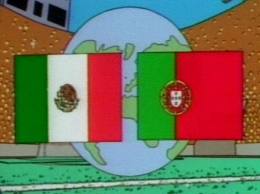 The Battle for the Greatest Soccer Team in the World; Live from Springfield, USA.

International soccer has never been more competitive than during the past 10 to 15 years.  The sport has spread to all corners of the world, and nations from every continent have produced quality players who play in the best leagues.  Despite all that added participation, this current Spain squad has managed to dominate in Europe and globally.

The population of Spain is just under 50 million, not insignificant but well short of the other European soccer powers (Germany sits around 80 million, while Italy, France and the UK all hover between 60-65 million)[1].  Yet they manage to produce some of the best players in the world.  Even to the casual fan, names like Xavi, Casillas, Iniesta, and David Villa, among others, carry weight.  So how do they manage to do it?

It’s a cultural thing.  Canada dominates, or at least holds a serious edge, over its competitors in ice hockey, because little kids from Whitehorse to Charlottetown are brought up to adore and imitate their heroes, Bobby Orr, Wayne Gretzky, or these days, Sidney Crosby.  So it goes in Spain, with their gold standard players (see above) assuming the new hero roles.   Kids in Brazil, meanwhile, are being tuned in to a whole other world of sport, through basketball, tennis and even baseball.  Why? To put it as succinctly as Puff Daddy once did, it’s all about the Benjamins, baby.

Globally, soccer is recognized as the sport of the barrios and ghettos.  Unlike in North America, where registration fees, field permits and equipment purchases make soccer the sport for the well-funded child, in South America, Europe, Africa and Asia, soccer is played on city streets and open fields with old socks, balled up plastic bags, or anything else that looks roundish.

Europe’s current economic meltdown is no secret.  Spain’s economy has been one of the hardest hit by the recent turmoil, but things had been going downhill for years before that.  Meanwhile, Brazil’s economy has blossomed in the past ten years, which has created a whole new middle class of families that can afford to play the luxury sports (like tennis and golf) and abandon the barrio soccer matches of old.

The last team to dominate globally like this was the Brazil squad from the years 1958-1970.  They won 3 of the 4 World Cups in that period.  They also boasted some guy of whom you may have heard; Edson Arantes do Nascimento. Who? Oh, you must know him by his professional name. Pele.  Pele scored 77 goals in 92 games for his country, and most of them looked like he was playing against teams made up mostly of crash test dummies and empty jerseys. (Seriously, he made it look THIS easy).  Soccer was a different sport back then.  Defenders were built like middle-aged computer analysts, and played the game as if it were rugby.  Tackles, as they existed back then, were more like NFL tackles than deft, delicate, perfectly timed interceptions or ball-removals.  A speedy forward could blow right past these Neanderthals, and Pele did it better than anyone back then.

These days, defenders are as athletic as the forwards they are assigned to defend.  Sergio Ramos and Gerard Pique, Spain’s all-world central defenders, do not resemble the defenders of the 1960s. Jordi Alba, who you may remember from this play in Sunday’s final, runs about as fast as Pele’s car drove back then.   In short, these are not the same quality players as in the past.

More nations are playing the beautiful game than ever before.  Countries in Africa, Asia, and North America are far more prominent now than in Brazil’s heyday.  The competition is stiffer, so what matters most, even more so than the quality of players, is the proper coaching strategies.  Spain, much like Canada in hockey, has been doing it so long, they seem to have mastered the sport.  They have the best players, yes, but they also have some of the best coaches.  Pep Guardiola, the until-recently head coach of Spain’s most successful soccer team, FC Barcelona, is also a former Barcelona and Spanish national team player.  He, among others, is at the forefront of this new wave of Spanish soccer awakening.  Guardiola, in his tenure with Barcelona, won multiple Champions League and Spanish League titles.

To summarize: Spain has tremendous athletes, from a long tradition of athletic competition.  They have a sinking economy that is actually a key to growing soccer as a national sport, and they have played the sport long enough, and from a long history of soccer, have learned from other rivals (including Brazil) to put together strategies that have yet to be conquered.

Can they be stopped? Sure.  But it will take more than just a lucky game by a skilled opponent.  Only the right confluence of circumstances can bring on a new champion of the global game.  Until then, El Rey stay the king.

The Kings of Soccer

[1] The Netherlands is home to 16 million, but they have not been good enough, long enough, to be called a European soccer power just yet.  Then again, France and the UK haven’t really done much lately either, but I digress…