So, this season has been pretty predictable in the American League.  New York, Texas and Detroit are my picks to win their divisions, and the Angels and Red Sox will compete for the wild card spot.  Over on this side of the MLB, however, things are, shall we say, interesting?

The current NL division leaders look like they’re taken from approximately 1940.  If you re-animated Babe Ruth and told him Washington, Pittsburgh and the Dodgers were among the best teams in baseball, he’d probably wink and nod and chug a beer.  But that was the last decade all three of these cities had teams worth noticing.  Of course, the Dodgers moved to Los Angeles in 1958, and Washington lost their team to Minnesota in 1961, but we should move on from this history lesson and get into current affairs.

In the West, the Dodgers and Giants (another former New York team) are locked in a head-to-head battle for the division lead.  The Dodgers have Matt Kemp and Clayton Kershaw, part of baseball’s newest generation of mega-stars, while the Giants boast a powerful young rotation of Tim Lincecum, Matt Cain and Madison Baumgarner, and the best hitting catcher in baseball right now in Buster Posey.  Both teams are very good at home and average on the road.  Honestly, this one is tough to call, but pitching usually trumps hitting, so I have to go with the Giants to win this division, the Dodgers to place second, and the rest of the division (Arizona, San Diego and Colorado) to play 162 games of something resembling professional baseball. 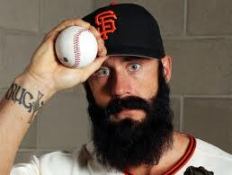 Moving to the Central, we again have a three-way race for the division lead (Pittsburgh??, Cincinnati and St. Louis), and a three-way race to the end of the season (Milwaukee, Houston and Chicago).  This Pittsburgh team has come out of nowhere, built up by   decades of struggles and high draft picks.  Andrew McCutchen is a genuine superstar, a five-tool player who plays with heart, a poor city’s Josh Hamilton.  If he can re-ignite this moribund franchise, just imagine what he could do with some real talent around him.  Once again, however, I must look to the pitching, and the Pirates are desperately lacking in this department.  I dare you to name their staff ace.  You might say A.J. Burnett, or even Erik Bedard.  But their best starting pitcher this year has been James Zell McDonald, a career minor leaguer who at 28 years old has finally been given a shot in the majors and has done quite well for himself.  But how long can his hot start possibly last?  Even Burnett and Bedard, established Major Leaguers, are pitching way out of their minds right now.  Sorry Pittsburgh, but we’ll be seeing you in the third place spot come September.

St. Louis, meanwhile, are the defending World Series champs, but this squad has a slight difference from last year.  They’re missing Albert Pujols, and he’s kind of a big deal.  Matt Holliday has picked up some slack, David Freese is breaking out and Carlos Beltran has been reborn.  Solid pitching and hitting should carry this team to one of the two wild card spots.  This division, however, belongs to Cincinnati.  They offer the most complete package of hitting (Joey Votto, Jay Bruce, Brandon Phillips) and pitching (Mat Latos, Johnny Cueto and Aroldis Chapman) of any team in this division, perhaps even in the National League.  Look for them to raise the NL Central banner this season. 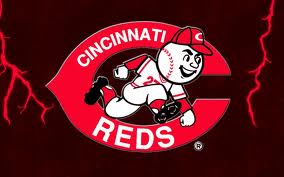 Finally, the NL East, where the Montreal Expos…er, I mean, the Washington Nationals, have come alive and are poised to be THE surprise playoff team this season.  They are not the most talented team in this division (that distinction would have to go to the Marlins or Phillies, at least on paper) or the best managed (Atlanta, naturally) or even the team with the highest payroll (the Phillies again), yet they have the swagger of a 16 year old driving his car to school for the first time.  And this one, of all the shock teams leading their divisions at the all-star break, looks to be the one that could last the season.  They play great at home and even better on the road, they can hit the cover off the ball, and they have a strong young rotation of Stephen Strasburg, Gio Gonzalez and Jordan Zimmermann.  Much like the Reds in the Central, the Nationals have the complete package.  Their division, however, is not like the NL Central.  Any one of the Marlins, Phillies or Braves could wake up at any time, get hot, and blast their way to the top of the standings over the next three months.  Look for the Nationals to hold on to at least a wild card spot, if not the division. 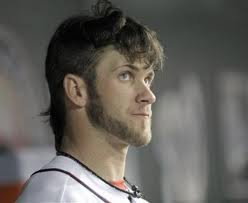 Bryce Harper: He even cuts his own hair

Pleasant Surprises: The Pirates and Nationals have shown us that even in the salary cap-less world of MLB, being really bad for a really long time can eventually pay off.  At least for half of the year.

Money Can’t Buy Me Happiness: The Marlins and Phillies can split this award, melt it down to gold, then trade in the gold for cash to buy the solutions to their problems.

Some Things Never Change: The Toronto Blue Jays, of course, who always seem to take two steps forward (Hey, we have the most dangerous hitter in baseball! And a crew of young sluggers like Rasmus and Lawrie!) and two steps back (Oh, our staff ace forgot how to throw his fastball. Oh, our bullpen thinks their job is to give our outfielders practice at chasing down line drives to the gap.)  When it’s not one thing, it’s the other.  I remember the days when our pitching staff struck fear into the hearts of opponents, and our “hitters” swung whiffle-ball bats.  When well it all fall into place?

C – Wilin Rosario, COL – Slugging young catcher is the exception, not the norm, in the NL.

1B – Paul Goldschmidt, ARI – A very solid hitter in the Paul Konerko mold.  Should be a star very soon. 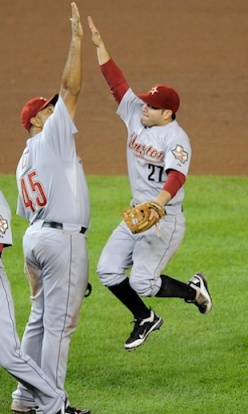 Jose Altuve has taken his game to new heights

3B – David Freese, STL – May have been mentioned in this discussion last season, but with Pujols gone he gets the chance to be a leader and has not disappointed.

SS – Ian Desmond, WAS – Finally gaining the attention he has deserved.  Named to first all-star team this season.

OF  – Melky Cabrera, SF – Mostly a utility outfielder for the Yankees, got a starting opportunity with the Giants and has made the most of it.

OF – Andrew McCutchen, PIT – Playing baseball in Pittsburgh lends itself to obscurity, but believe that this guy is the second coming of Griffey.  5 tools, plus just seems like a genuine cool dude.

[1] Instead of something meaningful like, oh I don’t know, the records of the two teams competing or something.