You know that feeling when you receive a bonus cheque from your boss? Or find 20 dollars in your jeans that you didn’t know you had? It’s a great sensation, and if you’re like me, you’re quickly thinking of ways to get rid of this annoying extra money. Well the fans of France’s Ligue 1 soccer club, Paris St-Germain (or PSG) know that feeling. The difference, however, is that the bonus cheque is not for a couple hundred bucks, but instead it’s 100 million Euros from new ownership group Qatar Investment Agency (QIA) to get the roster up to the standard of European powerhouses like Manchester United and Barcelona.

Paris St-Germain is relatively young in the realm of European soccer clubs.  PSG formed in 1970 through the merger of Saint-Germain and Paris FC, and has only won one European title in that time, as well as two French League titles.  AC Milan has existed since 1899, and is widely considered the most successful Italian club (or second most successful, in deference to our friend Paul Andreacchi‘s support of Juventus), and one of the top 10 European clubs.

Paris St-Germain, Team on the Rise

Pundits agree that this roster will likely run away with the French Ligue 1 Championship, as there are no teams in France with this sort of investment and this level of talent.  France’s home league has more traditionally been a place for young stars to develop, then get swept away by the big money leagues in England, Italy and Spain. (Zinedine Zidane to Juventus in Italy, Thierry Henry to Arsenal in England, Ronaldinho to Barcelona in Spain).  Contrary to tradition, PSG has been able to lure players AWAY from those leagues this offseason, with 1) massive transfer fees to convince the teams to sell, and 2) promises of huge lucrative contracts for those players.  Ibrahimovic and Thiago Silva both have jumped ship from AC Milan, one of Italy’s top three teams, and one that is generally a buyer not a seller, in the summer transfer season.

AC Milan is owned by former Italian Prime Minister Silvio Berlusconi.  Their bankbooks show net losses every season since 2005, and while the team is hardly lacking in talent this season (Alexandre Pato and Kevin Prince-Boateng are two of their rising young stars), losing two of their best players within a week is a disturbing trend for any team in any sport. In addition, Barcelona, where Ibrahimovic played before joining AC Milan, this week claimed that the Italians still owe them 6 million Euros for their purchase of the striker back in 2010.

AC Milan has also been a victim of a trend unique to the Italian Serie A. Attendance in Italy does not come close to rival that of Western Europe nations like England and Germany. One reason for this may be found in the story of the Ultras, or super intense Italian soccer fans, who once managed to not only bring a scooter into an Italian soccer stadium, but also attempted to light it on fire.  When that failed, they threw it onto the playing field.  Compared to the hyper-safe, family friendly sports arenas of North America, can you blame Italian families with young children for staying away from an atmosphere like this?  Less attendance means less revenue, of course.  In addition, TV deals in Europe are not quite as lucrative as they are for big money North American leagues like the NFL, or even the English Premier League.  The combination of those two issues, plus the fact that AC Milan has not won a European title since 2007, has triggered their financial downward spiral. 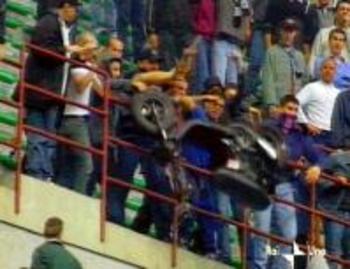 Recent super-rich clubs such as PSG and Manchester City must be mindful of AC Milan’s recent financial struggles.  Though their owners have millions, perhaps billions, of euros to fall back on in case of hard times, investing these extreme amounts of money only really pays off if the team can win the prestigious UEFA Champions’ League, Europe’s biggest club competition.  Financial prizes for domestic leagues have not kept up with the lavish spending of the past decade, so without a Champions League victory, these teams could potentially lose millions of Euros every season, just on their player wages.

With more foreign (mostly Arab, but potentially Chinese as well) investment into soccer clubs, first in England but now spreading to France, Germany and elsewhere, the dominance of the big three European leagues could soon be coming to an end.  Perhaps it will not be long before we see a European champion from Russia, the Netherlands, or even Greece. (OK, maybe not Greece).