[Editor’s Note: Just to show how quickly the NBA landscape can dramatically change, here’s an article written shortly after the Steve Nash signing by the Lakers went down that we had planned to run after the Olympics. Ultimately, our decision to hold off on publishing this was a rather unlucky mistake given the huge Dwight Howard trade that happened last week. Anyway, the Same Page stands by its decision to run the article now as it provides some pretty valuable (and funny) perspective.]

As the NBA free agency blitz officially winds down just as quickly as it began, it’s an appropriate time for us to figure out exactly what the Houston Rockets are doing decide how the most recent flurry of player movement will effect the league going forward. Though the Dwight Howard saga remains the unwanted guest at the NBA’s dinner table, Dwight’s reign of indecisive terror over the city of Orlando is not the league’s most glaring post-lockout issue. How, exactly, did an already powerful Lakers team accidentally strike gold in the summer of 2012? 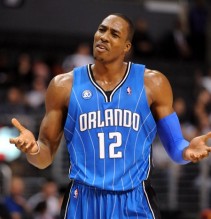 Relax, Dwight. This isn’t about you.

Year after year, owners of small market franchises make the same complaint: the rich continue getting richer while small market franchises remain locked in competitive purgatory. Given the circumstances of the last two years, this complaint is not without merit. It does, however, require a generous degree of context. Given the Thunder’s recent surge from league bottom-feeders to Western Conference champs, teams around the league are bottoming out and investing in the naïve hope that they too will land their own Kevin Durant. The footnote that’s always missing next to OKC’s success is that their investment in talent is subject to effective scouting and accurate appraisal of talent. Each player on the Thunder’s roster fulfills his role in the team’s well-oiled machinery. Those who were not suitable to the team’s structure were parsed out in favour of more appropriate pieces[1].

Though the consensus is that last summer’s lockout was about dismantling the infrastructure that allows the rich to get richer, it diverted our attention from a more glaring problem in the league’s heightening disparity. A growing number of small market teams are willing to part with valuable assets for a chance at a golden draft lottery ticket. This summer, the Phoenix Suns finally went all-in on their rebuilding effort and gift-wrapped Steve Nash to the Lakers. The Lakers will now begin the 2012-2013 season with two MVPs in their backcourt. The Suns, meanwhile, should get at least a top five pick next year thanks to their commitment to a season of 20 wins or less. What’s worse is that Nash likely would have stayed in Phoenix if the Suns weren’t so determined to cut salary and gut their roster. Instead, the Suns have assembled a team built around Houston’s second and fourth best players from last season. Good luck, boys!

But while the Thunder may provide the most illustrious model of rags to riches success in professional sports, their challenge of achieving a title victory may be stifled by the new powerhouse in L.A. As we’ve witnessed with champions like the ’08 Celtics and the 2011 Mavericks, championships are sometimes about constructing a core talent base and mostly about having considerable luck in fulfilling the roles around those key pieces. The Celtics were fortunate that Rajon Rondo and Perkins augmented the talents of their big three, while Dallas inadvertently realized that Tyson Chandler was the missing cog in their defence and title aspirations[2]. Though OKC management has proven savvy enough to construct a roster with a fantastic core and a respectable supporting cast, they may need to strike gold in order to keep pace with teams like the Lakers. Unfortunately, in today’s NBA, there might be none left.

[1] Here’s a few: OKC traded an undersized Jeff Green for an oversized Kendrick Perkins. At mid-season last year, the Thunder scooped up a reliable Derek Fisher to compensate for the unreliable Daequan Cook. They relieved Nenad Krstic of his duties as an NBA tough guy, allowing him to assume his more familiar role as a strange looking, balding Serbian man. [Ed. Note: And chair thrower!]

[2] A team like Chicago, on the other hand, grossly mismanaged this step in their roster construction. Their two most recent signees? Kirk Hinrich and Nate Robinson

3 responses to “Buying, Selling and Getting Lucky: NBA Player Movement 2012”