What is the allure of the “guys” trip? This was the question I asked myself, having said goodbye to my girlfriend (and gleefully skipping out of work early), as I made my way over to the Billy Bishop Airport in Toronto. The destination was locked in but the plans were vague, and I had barely made it down the escalator into the airport lounge before the trash talking started amongst the Same Page staff. So, why do we throw ourselves into it? 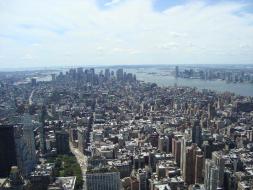 Taking it to the streets.

Yes, we touched down on Wednesday night in New York City.  Well, actually, in Newark, New Jersey, but that doesn’t sound as exciting. Having arrived too late to fulfill our dinner reservation at the Cardinal, we wandered. Within the next 5 hours we managed to maul some food at Spitzer’s Corner, drink at a bunch of near empty bars and eat at another diner a few hours later. The tone was set.

But my goodness, before I forget: the walking. You see, subways are plentiful in Manhattan but they’re all underground which is no fun. So we trekked above ground, around and around. Our first full day took us down to the south, across Wall Street and the steps of the NYSE. We dined on deli food and got to see some rabid protestors. We managed to move on before Paul could jump into the fray.

Did you know that the Staten Island ferry is free and sells beer on-board?  Well, actually, we discovered that the convenience store on the island sells larger beers than the boat at a reasonable price. It would have been a waste of money not to buy some (complete with Bunny Colvin-esque paper bag). Just remember to enjoy responsibly since we saw some poor woman, who perhaps was not, end up in the Hudson River. This is not an exaggeration. Now, there was some debate as to whether or not it was part of some bizarre coast guard training exercise, but I can assure you that it sobered us up pretty quickly just the same. 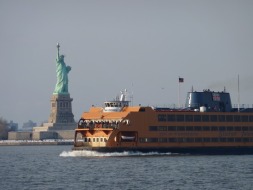 But for real: be careful out there.

Our exploration of the five boroughs continued into the night and into Brooklyn. We wound up having a grand time for a Thursday night, but first, adversity. Buffalo Cantina, the wing place we wanted to visit (as seen on Man vs. Food) was mysteriously closed and hunger was rapidly setting in. We stumbled upon the Roebling Tea Room and ate heartily from the pretentious menu (I think my steak was grass-fed and grown in a commune). Thankfully, the bars were easily approached; first, up on the rooftop at The Ides  at the Wythe Hotel and then on to a bowling alley with the Brooklyn Bowl. Our compatriot Nick attempted to snap a picture of the guest DJ ?uestlove and was almost tackled by an irate female bouncer. Lesson learned. Also, a cat fight broke out. This is on Thursday.

From there, we ease into Friday. And the most macho element of any guy’s trip: shopping. I will spare you the details. Money parted from wallet and at least three J. Crew stores were thoroughly ransacked. More walking. And then, as previously discussed by Chris, we made our rainy trip to Yankee Stadium. We sat in the exact worst row in the grandstand. Too close to get under the roof cover and then right in line with said roof for some delicious stadium drip. Interestingly flavoured beer for everyone! We persevered and made it back downtown to The Delancey for another night of responsible socialization. A small shout out: Brandon the bouncer, who works for Sanitation by day, and has a music career in the works, is cool. We made it to a 4 am last call (against logic or reason) and lived for Saturday.

Breakfast at the Essex was curative. Or perhaps damaging, I’m not sure. All I know is my food was, I think, completely deep fried and I drank as many mimosas as possible. We were now properly fueled for our pilgrimage to Tom’s Restaurant. Some context: for all Seinfeld fans, a visit to NYC means a proper trip to this  holy site. On my previous journey, many pictures were taken of the cathedral but this time, oh yes, this time we dined. I had the chicken salad sandwich and was served by an old lady. The trip could have ended there (my life could have ended there) and I would have been content. From this pinnacle of culture, we ventured to the Museum of Modern Art (or MoMA if you are, in fact, into the whole brevity thing). Just an aside, but I’ve thought about the museum and gallery issue very intently during my years of traveling and I still can’t decide what to think.  On the one hand, fine art and culture is important and enriching and on the other hand, we saw a painting that was simply the word “Oof”. It’s tough.

After three nights in New York, an appropriate term indeed.

But now, the main event: Saturday night. Dinner at Crispo was delicious. Before entering the restaurant someone enthusiastically complemented me on my shirt (I’m choosing to pretend they weren’t being sarcastic). We dined and went for one last mission into the night. Hey, did you know that if six dudes just kind of wander up to an upscale/trendy bar in the West Village they sometimes get turned away for dubious, “we are all full up at the moment”-type reasons? Shocking, I know. After much searching, a stop and rest break at a roadside bench, a photo op in front of Jane Jacobs’s house (for real!) with Ian, we made it to the classiest of NYC districts: the Meatpacking District. From there, it was all Gaslight all the time. For international flavour, we talked with a Norwegian-adopted Korean girl, met a delegation from Germany, an alleged French Open tennis player and the tallest Filipino woman I’ve ever seen. The sun eventually came up. And as Larry Miller reminds us, that sun is like God’s flashlight.

Maybe, upon reflection, we all put our bodies through these kinds of trips because, well, I don’t know. I wanted to make some grander point about friendship between men and memories and seizing the day, but man, NYC with your pals, you know what I mean?

2 responses to “One Team’s Odyssey In New York City”