When Bruce Springsteen delivered his keynote address at this year’s South-by-Southwest Music Festival, he capped off his speech with some advice for young artists. “Don’t take yourself too seriously, and take yourself as seriously as death itself.” This philosophy has likely never been more apparent with Bruce than it has with this tour, which rolled into Toronto last Friday. Bruce performs with the gusto of a man half his age, and his shows are always jubilant affairs that stretch well past the three-hour mark. Despite having to lead his twenty-plus piece band, entertain tens of thousands of fans, and keep his vocal chops fresh, Bruce remains an effortless performer, always looking like a young rock and roller having a good time with his buddies. 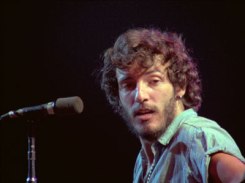 On Friday in Toronto, it was likely no different than any other night on this tour. Bruce played for three hours and thirty-seven minutes. No intermission. One encore. While it wasn’t the longest show on this tour (he played for four hours and six minutes in Helsinki earlier this year, the longest show of his entire career), it was still remarkably impressive considering the band’s age. Though the outrageous lengths have been long-standing features of his shows, Bruce has received greater than usual press about the nature of his marathon concerts. The New Yorker recently profiled Bruce and explored the topic thoroughly, while the Toronto Star recently ran a story highlighting the singularity of Bruce’s commitment to three or four hour spectacles. Ultimately, this sort of publicity is indicative of the unusual renaissance Bruce is currently facing in his career. Though his recent records may not demonstrate this, his influence is felt while listening to countless younger bands, from the Arcade Fire to Titus Andronicus. The generational gap that once made Springsteen seem like a hyper-American cheeseball is now closing, inadvertently highlighting Bruce’s prominence as the last great showman in rock and roll.

Naturally, Friday’s show at the Rogers Centre was entirely sold out. Allegedly, Bruce tore up the setlist halfway through the first song. This would hardly surprise me, given that Bruce took several requests (via fan-made signs, no less) and played a brilliant impromptu version of “Incident on 57th Street” alone at the piano towards the set’s end. The band remained unfazed throughout while Bruce spent most of the set either behind the mic with his guitar or running across the stage with mic in hand. At one point during the encore, Springsteen took a page from James Brown’s book and lay down on the stage’s edge, playfully demanding the show stop. Just as Bruce finally appeared fatigued, his guitarist, Steve Van Zandt, squeezed a wet sponge over his face, reviving the Boss like a rock n’ roll supernova. With the show well past the three-hour mark, there was little doubt that Bruce had the entire audience in the palm of his hand. 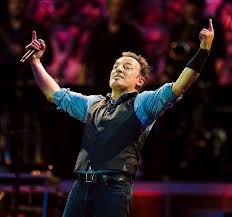 The setlist was a typical triumph, mixing recent standouts from this year’s album “Wrecking Ball” with crowd favourites like “Dancing in the Dark” and obscure b-sides like “Thundercrack”[1]. But just as Bruce and his band seemed their most invincible, the Boss would deliver the same cue to his right hand side that he’d delivered thousands of times before. For nearly thirty years, Clarence Clemons’ brief sax solo on “Tenth Avenue Freeze-Out” was a staple of E Street performances. However, on this night, and every other night on this tour, the band would instead drop from maximum volume to stone-cold silence, as a video montage of the late Clemons would flash across the giant video monitors. Though the E Street band had just electrified the crowd with their brand of exuberant and over-the-top rock and roll, the vulnerability of this group was suddenly tangible. The level of energy that I had attributed to relentless stamina began to seem more like resiliency of the will to entertain. Clarence’s nephew, Jake, now plays sax in the band and he almost always pumps his fist when he nails one of his uncle’s parts. It’s a small sign that their own generational gap is closing, and that the spirit of the last great rock and roll band will never retreat, and it’ll never surrender.

[1] I seriously lost my mind when they played this. I dare you to watch this video and not be blown away by the sheer ferocity of this band. I DARE YOU!