OK, I’ve just peeled myself off the couch after a solid 10 hours of NFL action.  I have been battling a cold all week, so my girlfriend was sympathetic when I said we would not be meeting up.  Little does she know, I plan on contracting this cold every Sunday for the next 17 weeks, starting roughly around noon, and keeping it until Monday night has come and gone.

Yeah, I’m a terrible person.  Anyway, here’s some of what you may have missed this week in the NFL.

We’ll start with Wednesday night’s season kickoff, which featured Mariah Carey (Huh?) Queen Latifah (Really?) and No Doubt (OK, what year did I wake up in?). A bizarre collection to open this year, most likely due to the scheduling of the MTV Video Music Awards on Thursday night in Los Angeles (“Quick, scramble together some artists off my dad’s iPod”… “That’ll work!”). Now for the game itself: Tony Romo began the season in very Romo-esque fashion, with a brutal interception in the first quarter, followed by three quarters of pretty competent quarterbacking.  As former All-American kick returner Forrest Gump once said, “Tony Romo is like a box of chocolates, you never know what you’re gonna get.”  His counterpart, Eli (The Artist Formerly Known as Peyton’s Little Brother) Manning, played efficiently, but did not inspire, and the Giants offense never really got rolling as many expected it to.  On paper, this should have been a very exciting game, but it played more like a mid-season, 4:15 kickoff time, regional match-up.  Dull and largely unmemorable.  Prediction: Kevin Ogletree will not have a game like that the rest of the season. 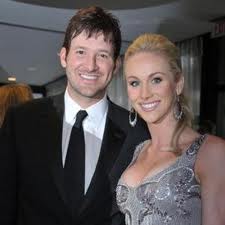 His quarterbacking is questionable, but he sure knows how to play the field, n’awmean?

Sunday, 11:30.  I awoke from a stupor and put some coffee on, and settled in on the aforementioned couch for ESPN NFL Countdown.  I checked my fantasy rosters, ate some Cheerios, checked them again, browsed around Facebook and Grantland for a while, checked them AGAIN, and then before I knew it, it was GAME TIME!  In Toronto, with a basic Rogers TV package, my game options were limited.  My team, the Cove…er, I mean, the Dolphins, were not on any station I could find, so I was forced to choose between the Buffalo Bills – New York Jets game, or the less intriguing New England Patriots vs. Tennesee Titans.  I settled on the Bills-Jets, as it would allow me to watch two of my fantasy players; Shonn Greene (great week, 15 points) and the Bills Defense (NEGATIVE TWO POINTS! Unheard of in these parts.)  After that game grew tiresome, I managed to also find the Washington Redskins taking on the New Orleans not-so-saintly Saints.  The Saints defensive players had their Bounty-gate suspensions overturned, but apparently the fear of another scandal hung over their heads, so just to be safe they decided to avoid playing defense at all.  (“Can’t fine us if we don’t tackle anyone, right?”)  And this fear of playing defense didn’t stop with the Saints. In the 1:00 games alone, six teams scored 30 or more points; Chicago, Atlanta, Washington, and New York Green all put up 40 or more, while New England and Houston topped the 30 mark.

Of the top two draft picks from June, Griffin definitely had the better season opener.  His team won, while Luck’s Colts dropped to the Bears.  But I hope everyone noticed that the rookie QB in Seattle had some skills too.  Russell Wilson could have won his season opener, if Braylon Edwards didn’t short arm a throw from Wilson in the end zone.  Seriously, Braylon, you’re there to help the kid, not hang him out to dry like that.

The marquee 4:15 game was obviously Carolina vs. Tampa Bay.  If you’re from Raleigh.  No offense if you are, but San Francisco was on the same field as Green Bay, in a matchup that you’ll probably see again at some point in January.  So, yeah, I watched that.  The 49ers looked very impressive, both on offense (Is Smith to Moss the new Young to Rice? I think maybe…) and on defense, where they stuffed Cedric Benson to the point where he only tallied up 18 yards all game!  Green Bay’s leading rusher? The guy who looks half asleep in all of his photos.  That guy had more rushing yards than Benson.  Yeah, he can move a little, but he’s not exactly Cam Newton.  Lastly, the Niners’ kicker, David Akers, might have to be tested for whatever Scott Steiner used on his arms.  He nailed a 63-yard field goal.  That tied an NFL record.  The 49ers are the hot pick for the NFC title, and they certainly looked worthy of those lofty expectations in this one. 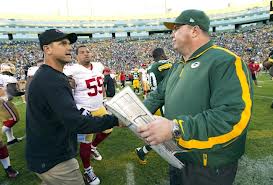 “We’ll see each other in January.” “Yup. Hey, aren’t you glad you don’t coach the Dolphins?”

Sunday, 8:15.  Peyton Manning jogged onto an NFL field for the first time in almost two years.  There were boatloads of question marks about Manning’s health coming into this game, but he sank those boats like an iceberg off the coast of Newfoundland (too soon?).  Anyway, Eli’s older brother looked great running Denver’s offense against Pittsburgh’s New Steel Curtain Defense.  One thing Manning’s Colts often lacked, even at their best, was a running game. Denver has existed around rushing the ball for decades, and this continued even with a future Hall-of-Famer under center.  Manning did not have to do as much of the work as he did with Indy, and managed to get hot and stay efficient all game.  He was 19 of 26 with two touchdowns.  There were games with the Colts where Manning would have had 26 passing attempts by halftime. That will not be necessary with the Broncos.  Moreover, the Broncos scored 17 fourth quarter points to pull away from the Steelers for good.  That’s the difference Peyton Manning can make.

Peyton Manning orchestrating a drive on Sunday night against the Steelers.

Monday, 7:00.  The Baltimore Ravens continued Week 1’s pattern of huge offensive outputs with a 44 – 13 high-on-bath-salts face-eating of the Cincinnati Bengals.  (No link there, that’s just gross.)  Their defense looked ferocious, and Joe Flacco had a fantastic game (21 of 29, 299 yards, 2 touchdowns).  Ed Reed had another interception return for a touchdown, and in the process, set the new NFL standard for interception return yards.  He’s been so good at it for so long, I can’t see anyone surpassing this total for a very long time.   The Ravens have the potential to be the AFC representative in the Super Bowl in February, especially if Flacco can continue playing as he did on Monday night.

Ed Reed (20) – just another day at the office. Seriously, is there a better football name in the world than Ed Reed?

Monday, 10:15.  I’m exhausted from all this football (I started coaching my grade 6 flag football team after school today), but I’ve got one more game to talk about, and I’m determined to get through it.  The Raiders apparently forgot how to snap a ball properly, specifically on punts, and this lead to at least 14 points for the Chargers, which ultimately turned the game in San Diego’s favour.  Good performances from Philip Rivers and Carson Palmer, and Darren McFadden who, though stopped on the ground, emerged as a real receiving threat out of the backfield.  If the Raiders are able to use McFadden on receiving as well as rushing plays, he could become an elite running back on the level of Maurice Jones Drew or Arian Foster.

Tuesday Morning Quarterback, signing off until next week.