Check here for some of Daniel’s previous TIFF coverage. And, as an added bonus, watch his recent appearance on Global’s Morning Show TO here.

Ah, the end of TIFF. The final screens have gone dark, the awards have been handed out, and the line ups have dispersed. Let’s take one last look at a few of the films and dream of next year.

Tower: Made by Torontonian (and fellow Ryerson grad. Yeah!) Kazik Radwanski, Tower is a unique, almost experimental film about a social outcast unlike those normally seen in movies. Our hero, Derek, lives in his parents’ basement, works construction and spends time working on his computer animation. Far from a hermit though, we learn that he is seeing a woman, enjoys some of the Toronto nightlife and does, in fact, exist out among people. What is fascinating about the film is its technique; it is shot entirely in closeups. What results is a film of introspection that pushes the audience towards some kind of empathy, if not understanding. It was Ingmar Bergman who said “the human face is the great subject of the cinema. Everything is there.” And, so, here is a film that dares to spend the majority of its time regarding every grimace, smile, and confused expression of this strange creature, Derek. The narrative of the film, eventually involving the capture of bothersome raccoons, skirts along the edges of the frame. It offers no easy explanations or, quite literally, a broader context of understanding. We are asked only to regard a man who seems to desire only to coast through life. A scene early in the film sees Derek at the dentist. He is told his wisdom teeth (surely a symbol of youth removed) have to come out. As the dentist remarks, it will be modestly painful now but it will get much worse when older. For a man lost in his own sheltered world, does Derek understand? 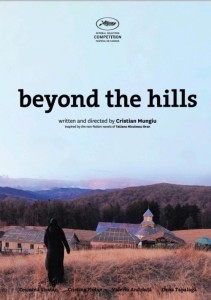 There is no music alive in these hills.

Beyond the Hills: What happens when the worlds of religious fervor and rural realities collide? That seems to be one of the many questions laced through Cristian Mungiu’s latest film, Beyond the Hills. As the title suggests, the film concerns itself with life in the rural foothills of Romania at a convent. We see a young woman, Alina, arrive in town to visit her friend, Voichita, who has taken to life as a nun. Alina seems perturbed; she wants to rescue her friend from her new life of servitude. But as the film reveals, perhaps Voichita does not need saving and what’s more, maybe Alina is not as solid a rescuer as she at first appears. As with Mungiu’s last film, the award winning 4 Months, 3 Weeks, 2 Days, the movie is based around the strong connections formed between two young women living in a land that seems both forgotten and harsh. Not surprisingly, the tone of the film is grim and humourless. As it moves into its middle third, the film begins a rather gripping shift into an almost horror-like intensity. The audience becomes unsure of the truth: is Alina mentally troubled or is something more sinister happening at this convent? That Mungiu’s film is shot with such an unrelenting bleak palette adds to the overall foreboding sense of doom. While the film runs almost three hours and continues in the sparse eastern European film tradition, Beyond the Hills moves into a place beyond understanding before settling back on grim reality.

My favourite: Middle of Nowhere

Middle of Nowhere: This was the best film I saw at TIFF this year. Its familiar sounding story involves a woman dedicating her young life to freeing her husband from jail, yet it is far removed from the typical and cliche. The woman, Ruby (beautifully played by Emayatzy Corinealdi) has put her life on hold for Derek, her husband. We gradually learn of the circumstances of the life they had, and we see in Ruby’s vibrant eyes her dedication to rebuilding what was lost. However, from the opening scene, showing Ruby and Derek sitting in the flat, grey visitation room, we see the distance growing between them.

There are complications involving the prison system, lawyers, and the introduction of a new man in Ruby’s life. The plot unfolds in no hurry and the tiny details shown build towards some powerful scenes. I was drawn to one in particular with Ruby, her sister, mother and nephew. The mother is trying to get her daughters to open up, to explain why their lives are the way they are. These are not broken people, they still have pride and purpose, but they find themselves marginalized, hanging on, as a result of their past decisions. For a film about being stuck, trapped by the past and indecision, director Ava DuVernay shows us a film of uncommon grace, power and definition. This film regards a wonderfully passionate woman who no longer knows where to direct her inner fire. It is a beautiful discovery, watching her decide how to take her first steps out of nowhere. 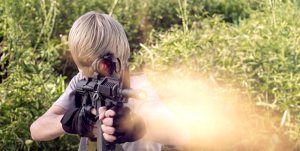 I Declare War: I’m sure most of us remember a time, as children, when we would play our imagined games of combat and war. Taking that premise, and stretching it as far as it can possibly go, comes the Canadian film I Declare War. Shot in the Rouge Valley in Toronto, the film quickly establishes its rules: two squads of kids (most of whom, carry the film effectively) face off in the forest, guns made of sticks in hand. Their ultimate weapon,of course, is their imagination, which allows them to take a stick or log and turn it into an assault rifle or bazooka. The film cleverly visualizes this war with actual weapons, which raises the inherent stakes of the film, despite it still being just a gang of kids spending some idle time in the woods. Cleverer still, each of the boys (and one girl, for an added wrinkle of misunderstood hormones) gradually reveals himself as an archetype adopted from various films and TV. What emerges is a film free of adults, with children in a pretend game, where the hurt, while mildly graphic, is emotional rather than physical. The worst that can happen to any of them is a scrap on the knee or a damaged friendship for a time. But then again, at 12, that probably feels worse than life in a platoon.

The lads of Wasteland.

Wasteland: The TIFF website describes this movie as “Ocean’s Eleven meets the Usual Suspects”, but I’d consider the addition of a dash of Guy Ritchie (minus the more extreme violence), if only because of the impenetrable accents. Wasteland is a heist film, cleanly done, with an amusing structure that has the hero, Harvey, beaten up and sitting in an interrogation room (with Timothy Spall as the questioning cop, always a good decision) right at the beginning. Harvey sets about to recount the tale of how he ended up there, which involves his battle with local crime boss Roper (bullishly played by Neil Maskell) and his ever present best mates as they pinball around Northern England. First time director Rowan Athale, nimbly sets up his drab world of pubs, clubs and wet streets and while the machinations of his plot eventually involve a few too many contrivances, it is satisfying to see the lads striving. This is a not a macabre movie; it has some zing to it, some quick dialogue (I could have used some subtitles), a couple of winning performances, and a cute ending that sends you on your way.