The referees are back! Even Omar Little would not have been welcomed as warmly in Baltimore as the men in Foot Locker uniforms were on Thursday night.  Of course, they were quickly put back in their places as soon as they dared to call a penalty against the hometown Ravens.  Can’t live with ‘em, can’t manage a professional league without ‘em.  The Ravens squeaked by the Browns 23-16.  Interesting side note to this game: The Baltimore Ravens came into existence in 1996, when then Cleveland Browns owner Art Modell moved the Browns to Baltimore.  The NFL then restored Cleveland’s historic Browns franchise in 1999, with a brand new expansion team.  So the Ravens went ahead and drafted future Hall-of-Famer Ray Lewis in their first draft year, leaving Browns fans to wonder what could have been had Modell kept the team in Cleveland and the Browns had selected Lewis instead.

Sunday afternoon saw a wide variety of games, from absolute blowouts (The 49ers blanking the Jets 34-0) to overtime thrillers (The Cardinals topping the Dolphins 23-20).  The Patriots also had their coming out party this week, a little later than usual, as they beat down on the future Toronto Bills (if Rob Ford has his way) 52-28.  The biggest news from this stretch of games is that the Cardinals and Texans remain undefeated.  While the Texans may have been expected to contend this year, the Cardinals may well be the shock of the league.  Going into September, they had an unclear quarterback situation and a suspect defense.  Four games in, well, they have gotten consistent, steady quarterback play and have developed into a dominant defense. 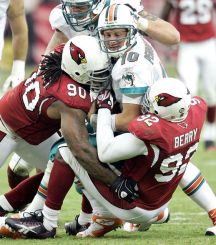 The Cardinals defense doing its thing.

The late Sunday games saw the Saints come to life against the Packers, but they ultimately dropped the game and fell to 0-4, matching my fantasy team.  Yeah, it’s been a rough season for my make-believe roster.  Ironically, the Packers were almost victim to a second consecutive referee robbing, by ignoring a clear Darren Sproles fumble on a Saints’ scoring drive.  Luckily it did not matter in the end for the Packers, but it does go to show that all referees, replacement or otherwise, make mistakes and miss calls.  Now, the PTI folks mused whether the Packers are victims of shoddy refereeing because they have no owner (they are a fan-owned franchise), but I do not take that claim very seriously, as I doubt that referees are mindful of who owns which team when they are making (or not making) their calls.

On Sunday night, the New York Giants again played a prime time game, and managed to keep it lively with the Eagles.  The decade old strategy of “icing the kicker” almost failed for the Eagles, as Giants’ kicker Lawrence Tynes missed wide left on his first attempt, only to get a second chance by way of Andy Reid’s timeout.  His second kick was straight as an arrow, but short by about two yards, and the Eagles were lucky to escape with a victory.  This entire “strategy” has been ridiculous since the beginning, as kickers have always had to kick in difficult, pressure filled situations.  Imagine “icing the quarterback” before a third and 10, or “icing the defense” on a goal line stand.  It’s nonsensical to think that making a kicker wait a few more seconds before kicking will alter the outcome negatively, and the evidence supports that kickers actually improve on second chances. Why wouldn’t they? Think of all the times in your life you could have had a second chance at performing a task, and how you would have done things differently. 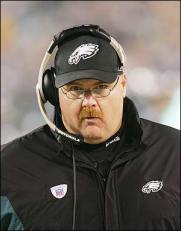 On Monday night, the Chicago Bears met the Dallas Cowboys, and Tony Romo showed his consistent inconsistencies that have dogged him throughout his career.  He threw five (FIVE!) interceptions and the Bears capitalized by outscoring the Cowboys 24-11 in the second half.  (Smokin’) Jay Cutler, on the other hand, played reasonably well, being able to hand off most of the game and having some time in the pocket to complete throws.  Perhaps shoving his offensive linemen will prove to be the locker room move of the season.

It is hard to believe, since this is only October 2nd, but we are a quarter of the way through the NFL schedule already.  By this point, some teams have made their statements (Cardinals, Texans) and others have fallen by the wayside (Those mighty Detroit Lions, anyone?).  The next quarter of the season will show the true identities of NFL teams, as injuries begin to mount, division rivalries heat up, and the weather begins to shift toward the wind and frost of November.  By the end of week 8, a clearer picture will begin to emerge of who will still be playing football in January, and who will be home resting those sore muscles.

And that’s another week from the couch.  Next Tuesday, I’ll be nursing a Thanksgiving hangover, and that couch imprint will grow exponentially from turkey and stuffing and pumpkin pie.