Apparently reports of the Arizona Cardinals’ rise to the top of the NFC got to their heads on Thursday night, when they lost a pretty pathetic game against a lackluster St. Louis Rams team that was missing their top receiver for most of the game.  The Rams’ defense dominated, and despite Sam Bradford’s awful 33 percent completion rate (NBA 3-pointers go in more than that), two of his seven completions went for touchdowns, and the Rams topped the Cardinals 17-3. The Rams are now 3-0 at home this year, and perhaps this division is not quite sorted out just yet. (More on the NFC West later).  Danny Amendola suffered a dislocated collarbone, and will be out six to eight weeks, which could hurt the Rams’ chances going forward.  The Cardinals looked lifeless in this one, and one possible factor could have been the short week that comes with playing a Thursday Night Showcase game.  As the season progresses and injuries and fatigue start to wear on players, these Thursday nighters are going to look more and more like preseason games, with starters coming in and out and teams looking out of sorts.  Many players report struggling to get out of bed on Tuesdays after Sunday games, and then having the quick turnaround to play again on short rest only adds pressure on already weakened bones and joints and muscles.

My NFL watching options, with regional limitations of course.

On Sunday afternoon, I sat down to watch the two local games available in my neighbourhood: the Steelers against the Eagles and the Giants against the Browns.  I do not pay for specialty channels or NFL Sunday Ticket, so I guess I get what I pay for.  The Steelers-Eagles all Pennsylvania rivalry game (not so much of an important game, standings-wise, as these teams are in different conferences) was a tough defensive matchup, as expected.  While that may make for an exciting game if one is in attendance, watching at home doesn’t really have the same feel.  In addition, being a fantasy owner of LeSean McCoy and watching Michael Vick try to do everything on offense can be pretty frustrating.  After about a quarter, I decided to follow the Browns-Giants.  The Browns had surged to an early lead, but apparently forgot that NFL games are four quarters long.  The Giants marched up and down on them in the second quarter, and the Browns could never match the offensive output they had produced in the first quarter.  The Giants topped the Browns 41-27.  And back in Pittsburgh, the Steelers squeaked past the Eagles 16-14 on the strength of Rashard Mendenhall’s return to the lineup.  Mendenhall had suffered an ACL tear last season, but looked in fine form on Sunday, running for 81 yards and a touchdown.

Rashard Mendenhall, back at it for the Steelers on Sunday.

Meanwhile, off my screen, the Colts and Packers were engaged in a potential game of the year candidate.  I kept hearing reports and score updates filtering through, and was shocked to hear the Colts had taken the lead in the fourth quarter after being down 21-3 at halftime.  Andrew Luck looked like Peyton Manning, guiding his offense through several scoring drives on what is supposed to be a pretty good Packer defense.  The Colts were missing head coach Chuck Pagano, who has begun treatment for Leukemia.  There is a sort of myth around players coming together for players or coaches who are battling serious injuries or illnesses.  Can the Colts be the latest version of a team to “win one for the Gipper”?  The Packers are now 2-3, and not looking at all like the 15-1 team from last year.  They are missing Greg Jennings, sure, but Randall Cobb and James Jones filled in nicely for him.  The defense seems to be the weak link here, and the Pack will need to figure out their holes and plug them soon, or they could be sitting on the outside of the playoffs come January.

Not so fast, Green Bay.

The late afternoon games saw three instances of utter domination: The Bears over the Jaguars 41-3; the Vikings over the Titans 30-7; and the 49ers over the Bills 45-3.  These are three of the hottest teams this season, and with the Bears and Vikings also in the NFC North (with the Packers and Lions), it may not be unlikely to see last year’s NFC North playoff representatives both relegated to observers this time around.  A changing of the guard in the NFC North? It certainly appears that way at the moment.  As for that crazy NFC West, with the Cardinals’ loss to the Rams, the 49ers appear once again to be the cream of the crop there.  However, whereas in years past the Niners were able to stroll into the playoffs with weak competition, this year whichever team comes out on top will have definitely earned their spot.  The Seahawks also won and have been looking formidable so far this season.

Atlanta and New England also won, and this is right on track with their recent histories.  There is not much to be said about teams that quietly go out and win their divisions year after year without much fanfare, but the Patriots have been doing it for years and the Falcons seem to be emulating that strategy.  Win by too much, and the league takes notice and teams start gunning for you.  Win by one touchdown every week, and you fly under the radar.  New England does not appear to have a division rival that will stand up to them in the long run (The Jets are still sorting out quarterback issues, the Bills have been dismantled in their last two games, and the Dolphins are a young team that are on the upswing, but not quite ready for playoff action). Nor do the Falcons, who stand at 5-0 in a division of 1-4 teams.  They can start strolling in the next week or two. 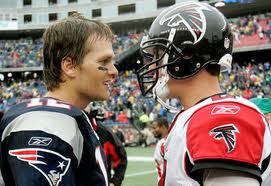 On Sunday night, the New Orleans Saints finally broke their goose egg and emerged from their matchup with the Chargers with a victory.  Suspended coach Sean Payton was in attendance, as requested by Drew Brees who was set to break the NFL record for consecutive games with a touchdown pass.  He did so, early, and then went on to throw another 3, and carried the Saints to the 31-24 win.  On the other hand, inconsistent Philip Rivers (the AFC version of Tony Romo) fumbled the ball and threw an interception in the fourth quarter, which allowed the Saints to seal their victory.  There may not be much physical difference between guys like Brees (Brady, Rodgers) and guys like Rivers (Romo, Cutler), but often mental strength is the key asset that carries NFL players, especially quarterbacks, to the elite level.  Perhaps it can be taught, but coaches of those almost-elite guys might need a team of psychologists to break through.  There is a certain mentality needed to be the very best at anything, and some people might not be born with it.  Some guys might be satisfied with being a multi-million-dollar pro athlete, while others see it merely as an avenue to even greater success.  Whether it is taught or hardwired from birth, no one is sure, but mental mistakes will continue to frustrate coaches and fans alike.

Philip Rivers is about to feel some pain.

This past Monday was Canadian Thanksgiving, so to complete the day of family visits and senseless face-stuffing, I dropped onto the couch and watched a football game, just like my American friends do in November (Same Page Team member Nick Setacci has also brought American Thanksgiving to us, and I now regularly treat that day as a holiday as well).  The Jets (2-2) and Texans (4-0) met in New York for what promised to be a total Jets beatdown.  The Jets had set up a great drive to end the half, but a tipped pass led to an interception and put the Texans inside the 10 yard line.  At halftime, the score was 17-7 in favour of the Texans.

The Jets continued to not use their biggest offseason acquisition, Tim Tebow, who proved last season that despite his unorthodox style, he can win games in the NFL.  If Tebow does get a chance and plays well, the Jets locker room could see a fracture whereby players side with de facto starter Mark Sanchez or Tebowmania, and that would be disastrous for chemistry.  On the plus side for the Jets, the absence of all-universe cornerback Darrelle Revis has not been crippling, as Antonio Cromartie has been given the chance to step into the cornerback spotlight and has proven himself to be on that elite level.

And that about wraps up Week 5 from the couch.  Next week, we’ll be joined by Hall Of Famer Dan Marino.  Don’t believe me? You’ll just have to return next Tuesday.