The 90s were a weird time. Can we admit that now? We’re 12 years out and the further we get from that decade the more bizarre some of the cultural artifacts of that era seem. The AV Club recently finished their Top 50 movies of the 90s list and as expected it has all of the Coen brothers, Wes Anderson and Tarantino that you’d expect. If you looked at that list in a vacuum you’d see a staggeringly diverse list of quality films and conclude that the 90s were awesome. You know what you wouldn’t see? A hammy, art deco action film, starring Alec Baldwin as a semi-supernatural hero based on a 1930s radio show, fighting a descendent of Genghis Khan.

Yep, The Shadow would be entirely absent. 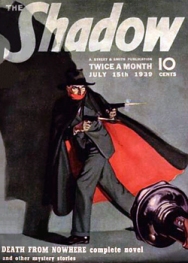 One of the pulp novels inspired by The Shadow radio program.

Back in 1930, the mysterious Shadow character appeared on a radio program called Detective Story Hour (things were really literal back then). Now, the Shadow was not a cuddly hero in the Superman mold; he was scary. He was described as having the ability to “cloud men’s minds so they cannot see him” (OK, very literal, except for when describing superpowers). Basically, eight years before Batman showed up, there was already a well-off, menacing man of darkness, who preyed on the criminals of his city, while gaining an almost supernatural force of legend. Thus, it would seem, given the smash success of Tim Burton’s Batman in 1989, that the Shadow would be poised to make a comeback. Then again, this is the 90s we’re talking about here.

We jump to 1994 where the Shadow is ready for his latest role in a major motion picture starring Baldwin and Penelope Ann Miller, and directed by Russell Mulcahy (I know what you’re thinking: who? He’s responsible for both Highlander AND Highlander II. And hasn’t been heard from in any big way since 1995. Go figure). It was supposed to be a bold, opulent (and lucrative) take on the classic character but, well, it didn’t quite go that way. The film disappointed, the sequels were scrapped. And now we ask, what could have been?

First, a film overview: The Shadow, we learn, was once an evil man in Lhasa (why? Just ‘cuz). He gets enlightened by some, you know, enlightened figure, returns to New York City, builds up a network of agents who’s lives he’s saved (complete with pneumatic message tubes and glowing ruby rings to communicate), and fights crime. But, you know, problems arise. In a series of lurching sequences, Shiwan Khan (last descendent of Genghis) shows up, tries to recruit the Shadow to rule the world, is spurned, decides to blow up NYC instead and thus, they fight. Oh yeah, and Miller’s Margo Lane shows up as the love interest with an increasingly distracting wardrobe and the sporadic ability to read minds. Yeah, I don’t know either. 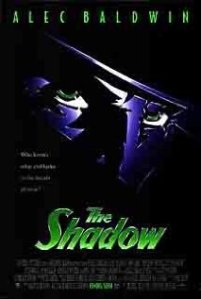 Criticize the film all you want, this poster is awesome.

I started watching the movie with a vague recollection that the villainous Khan (in what can only be described as a singular performance by John Lone) was the weak link of the film. Oh, how wrong I was! Lone plays Khan like a deranged, spurned beauty queen. He arrives in classic Mongol accoutrements, an ancient warrior transported to a different age. But as the movie progresses, he clearly falls in love with the latest fashions and tastes as he is seen later wearing a Brooks Brothers suit (as inspired by his BFF the Shadow) and enjoying bourbon. In fact, for all his evil proclamations, he spends most of the movie tossing out insane laughter (of the type later mocked by Dr. Evil) and talking to himself. Of course, he also makes one of the most effete declarations of desire for world domination in film history (sadly, I couldn’t find the Youtube clip).  Honestly, it’s such a deliciously bizarre performance you almost forget that the movie also has Peter Boyle, Ian MacKellan, Tim Curry and Jonathon Winters (!)  furiously chewing scenery in the background.

Despite all of this, the film has its moments. Baldwin (someone who has long since seized his comedic destiny) is credible as the titular hero; his good looks and strong presence lend well to the role, as unevenly as it may be written. There is some rich production design in there as well, and the visualizations of the Shadow’s admittedly vague powers are particularly admirable (this was 1994 after all). I’ll always remember the fantastic moment when the Shadow realizes that Khan has hid an entire, ornate, pure Art Deco hotel (named the Monolith, of course) from the entire city. Spoiler alert: It’s a great reveal. Sarcasm aside, if you look past the layer of cheese and erratic pacing, there is a real gem of an idea here. The Shadow is not a nice guy, he has his inner demons. There is an interior struggle inherent to his character that makes the Shadow a fascinating anti-hero (this film, of course, visualizes that struggle by having Baldwin fight with a small animated knife. So, yeah, mistakes were made).

Why can’t we revisit this world? Is there no place for a classic style gangster film that also twists in some super natural elements? It can’t be because of the setting since recent movies (upcoming Gangster Squad, Captain America, etc.) have drawn interest and dollars, respectively, from their classic pre- and post-war eras. Let’s say we scrap the crazy mad scientist plot to blow up NYC, focus on the Shadow grappling with his evil side, maybe shift the perspective to one of the recruited agents (a la Hellboy, a great serious/funny anti-hero success story). Perhaps, as this audience surrogate learns of the Shadow’s world, we see the darksides of both the city and the man. Now let’s call someone like Hugh Jackman (he did Van Helsing right?) and get the ball rolling. 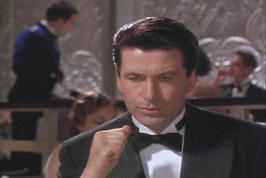 You gave it your best shot, Alec.

In retrospect, outside of the aforementioned box office success of Batman (largely a result of Tim Burton at the peak of his powers), “super hero” movies weren’t really a thing yet. The ground just wasn’t firm enough to launch franchises based on other classic and re-purposed pulp characters. It was tried in 1991 with The Rocketeer and afterwards, in 1996, with the Phantom (and that one even had Billy Zane!) but they just never took off, even in a decade like the 90s. Nowadays, though, we’re living in a world where an Ant-Man movie is in development. Ant-Man. Surely there’s some room in a dark corner for the Shadow.

Or, I don’t know, maybe audiences will just never be ready for a hero with the name Lamont Cranston.

One response to “We Can Remake It: The Shadow”