This past week, my fantasy team went up against a fellow anonymous fantasy gamer.   My starting quarterback was Eli Manning; his was Tony Romo.  In the real world, Manning’s Giants knocked helmets with Romo’s Cowboys. 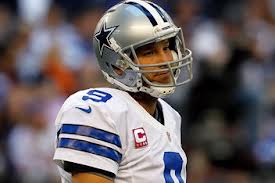 Tony Romo ponders the mystery of his career.

Tony Romo, as has been discussed in this space previously, is an incredibly inconsistent quarterback.  His glimpses of brilliance are countered with prolonged stretches of complete and total brainlessness.  He has all of the physical tools required of the position (height, strength, arm power, and even mobility) but the mental strength of a kindergarten student.  Junior kindergarten, you know, like just learning to count and reading 4 letter words.

In week 8, Romo threw four interceptions, and completed just 58 percent of his passes.  His interceptions and poor decision making likely cost the Cowboys the game, as they hung close enough to keep it interesting right to the end.  In fact, if Dez Bryant’s fingertips had landed an inch closer to his body, the Cowboys would have won the game and Romo would have likely been hailed as the come from behind hero.

Of course, one will argue that fantasy football is an exercise in statistics, not results.  Romo threw for over 400 yards, while Manning threw for less than 200.  These are statistical figures which can not be questioned, while leadership can not be added up and divided.  Romo also threw for a touchdown and rushed for one, while Manning was unable to find the end zone using arms nor legs.  Again, 2 is higher than 0, so Romo’s stats are worth more.

Tony Romo went undrafted before being signed by the Dallas Cowboys in 2003.  He was a third stringer for two seasons, then began the 2006 season as the backup to Drew Bledsoe.  He became the starter in week 8 of the 2006 season, and maintained that position throughout the regular season and playoffs.  In the NFC wild-card playoffs, Romo fumbled a snap he was preparing to hold for his field goal kicker, and was tackled trying to run the ball into the Seahawks’ end zone, costing the Cowboys the game.  Since then, Romo has been known as a gunslinger who comes up short in big games.  He is often able to put up impressive numerical stats, but rarely leads his team to victories, especially playoff victories.

Eli Manning entered the league with much fanfare in 2004.  He famously refused to play for the San Diego Chargers, and was traded to the New York Giants on draft night.  He began that season as the backup to Kurt Warner, but quickly inserted himself into the starting role.  By the next season, Manning was the unquestioned number one in New York, and on the cusp of building a Super Bowl Championship team.  (The Giants won in 2007 and again in 2011).  If Romo’s fumbled snap was the catalyst to his decline, the reverse of that would have to be Manning’s miraculous pass to David Tyree in the 2007 Super Bowl (you remember, the ball to helmet catch).  Had that play failed, Manning might still be a winless anonymous quarterback.  Worse yet, he might have been cursed with the same stigma that haunts Romo: can’t win big games.

A comparison of Romo’s and Manning’s career stats shows that Romo is actually a more efficient passer, has a higher QB Rating, and has thrown fewer interceptions than Manning.  It seems unlikely, but the stats don’t lie.  The difference is not how many mistakes the quarterbacks make, but when exactly they make them.

Manning and the Giants are notorious for getting off to slow starts, losing a few in September, before turning it on in October and ending the season on a hot streak.  Manning is 27-5 in October games in his career, and his postseason record is 8-3.  Manning has learned, perhaps from his older brother Peyton, or father Archie, that Super Bowl victories and errors are the only ones fans remember.

Tony Romo has never had the right supporting cast, his supporters chime in.  Except, for his first few seasons, he had Terrell Owens as his main option at wideout, and Jason Witten at Tight End. (Romo has been putting his trust in Witten for years; this past Sunday, Witten had 18 receptions!)  Not too shabby, some quarterbacks might say (Dan Marino, for example, might say that; Marino’s best receiving options in his whole Dolphins’ career were two guys named Mark who were under six feet tall, and OJ McDuffie). The Cowboys have also had solid, if not spectacular, running backs and defenses, during the Romo tenure.  Solid, not spectacular, pretty well sums up the Giants squads during Manning’s reign as well.  A near parallel in both departments, in fact.  The Giants have not had more talent than the Cowboys in the past decade, just a better quarterback.

Does it all boil down to luck?  Could Romo’s gaffes and Manning’s gaffes be completely inseparable, and just a question of timing?  If so, what does that say about either quarterback? Is Eli Manning just lucky?  Is Tony Romo just unlucky?  No, it’s not that simple.

Winning when the stakes are at their highest is an exercise in mental toughness.  Playoff games require a quicker decision, a stronger throw, a better read of the defense.  Some guys have it, and, as Tony Romo and countless others have proven, some simply don’t.

So what do the stats really show about a quarterback?  They can count up yards, touchdowns and interceptions. But the measure of a quarterback is in leadership and victories.  By those standards, Manning is way ahead of Romo.  So I’ll keep Manning and his consistent paths to victory, you can take Romo and the inconsistencies of the gunslinger.