The 2012 American Presidential Election Campaign has been framed around one major factor:  Barack Obama’s “Socialist” vision of an America where the wealthy pay higher taxes to support the underclasses, versus Mitt Romney’s vision of an America where individual success is a product of one’s own hard work and should not be “punished” with higher taxes.  This ideological battle is unfolding as I write this, while the 2012 NFL football season is halfway finished.  What do the two have in common? Plenty.

Football, the American version, is the ultimate definition of a socialist activity.  Think about it; every player has a set position, a defined role.  Moreover, some higher authority, namely, the coach, defines that role.  It is not the prerogative of individual players to choose their place.  Often, that role is defined before one even sets foot on the field. A 300-pound, 6 foot 7 inch man is rarely going to become the team’s punt returner.  A 180-pound, 6-footer would do rather poorly as a left tackle.  You get the idea.

On offense, a football team has one singular goal: to get the football into the opponent’s end zone.  The offense is divided into two sets of players: blockers and skill players.  Your blockers do exactly what it sounds like.  They block the defenders to allow the skill players to do what they do best: run, throw and catch to score points for their team.

Last season, Ray Rice scored 15 touchdowns.  He was the man that carried the ball across the goal line, the one singular act that added 6 points to the Baltimore Ravens’ scoreboard.  But, a touchdown is achieved through the hard work and determination of not just Rice, but his teammates as well.  Let’s break it down.

The Quarterback is the leader of the offense.  He surveys the defense, changes the play if needed, and is responsible for throwing and sometimes running the ball forward.  He also takes much of the heat if an offense fails.  These are your field generals, your brains of the operation.  A good quarterback is usually not enough to win a Super Bowl, the way a team can win with “good” receivers or “good” defenses.  Some recent Super Bowl winning quarterbacks: Eli Manning, Aaron Rodgers, Drew Brees.  Not listed: Jay Cutler, Philip Rivers, Michael Vick (all good quarterbacks, but good is not quite good enough at this position).

Wide Receivers are needed to catch a quarterback’s throws, distract defenders from the actual direction of the ball, or block defenders on running plays.  In the 2000s, there was a sudden influx of “diva” receivers into the NFL.  Think Terrell Owens, Chad Johnson/Ochocinco/Johnson, and DeSean Jackson.  These guys made waves for several seasons, but eventually their skills faded, or their antics grew tiresome, and they were released and left to drift.  Jackson is still with the Eagles, but he is not quite the difference maker many thought he could have been.  The better, longer lasting receivers, are the ones who dig deep, work hard for their teams, and even throw blocks.  Marvin Harrison, Hines Ward, Calvin Johnson.  Few drives ever succeed without the wide receivers.

Finally, we come to the offensive linemen.  These are the big dudes, battling in the trenches (football uses many military terms; more on that later) and shoving equally big strong men out of the way for the skill players to do their thing.  There is only one statistic that is accumulated for offensive linemen: the pancake block.  What is the pancake block? It’s a block that takes a defender out of the play, thus making it easier for offensive players to accumulate stats like yards and touchdowns (you know, the only stats people care about.) 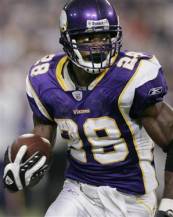 Yes, still just a cog in a larger machine.

All of the work done by the offensive linemen is done within the first three seconds, but it is the most crucial.  Peterson has a gigantic hole to run through, and his natural ability easily coasts him through that.  From 0:03 to 0:07, Peterson relies on his own speed, agility, and strength, in that order, to clear up space in the secondary.  At around 0:08, it looks like Peterson is about to go down, when lo and behold, wide receiver Sidney Rice comes in to throw that final, effective block, which springs Peterson to the score.  Now, that touchdown is awarded to Peterson in his personal stat column, as he was the one to carry the ball into the end zone (and worked hard for it, don’t get me wrong).  However, it would have been impossible for him to accomplish that score, without the team effort of his linemen and receivers to throw blocks.

So while the quarterbacks, running backs and wide receivers catch all the praise and make the stats (and the big money contracts), keep in mind those trench-fighting offensive linemen, who dig, push, drag, and all manner of other labour-intensive words, to keep the paths clear for the superstars.  To borrow from President Obama’s own words: You didn’t score that!

So what do those linemen get in exchange for all of their hard, anonymous work?  Most often, a successful offensive line is kept well-fed by their skill playing counterparts, often quite literally with buffet dinners, sometimes with other gifts.  The wealth is shared, and all members of the team are satisfied.

This analogy can be extended to another of America’s hallowed institutions: the military.  As stated earlier, football borrows many terms from the military (terms like battle field, general, trenches, and others) and the military is another decidedly socialist endeavor.  Power in the hands of the state, the individual will is subservient to the collective, and the success of the team is more important than the success of one person.  This is what is so perplexing about American politics.  In almost any other field, Americans believe, by and large, in the greater good.  Yet, when it comes to concepts of money, and taxation, Americans all want to be the high-stepping, juking, spinning Adrian Peterson, and ignore, and even insult, their American teammates who helped them reach their goals.

One response to “The Politics of Football: 2012 Election Edition”