By: Chris Dagonas and Dan Grant

To tackle the entire year of sports is not a job for one man. Fortunately, we here at the Same Page managed to rope in two men to take a look back at the highs and lows in the world of sports in 2012. Read on and enjoy.

Chris: 2012 was a fascinating year in sports so let’s not waste any time here. I want to start with the Lou Marsh Award, which was given to Christine Sinclair.  She had a very impressive Olympic Tournament, and has often been mentioned as among Canada’s best athletes.  Dan, what are your thoughts on the choice?

Dan: Well, before we get started Chris, I wanted to ask… you want this to be a meat and potatoes thing, or should we include some witty banter also?

Chris: Well Dan, seeing as you’re writing this part for me because I have a real job molding young minds, I’m going to say witty banter.

Dan: Well that’s good because I was going to fire in some banter, some repartee if you will (or even if you won’t) regardless of what you think Dagonas! You can’t tell me what to do and you never could!

Chris: I just agreed with you. And you’re writing this. You’re arguing with yourself!

Dan: Always trying to tell me what’s what!

Chris: Can we please just talk about sports? The Lou Marsh?

[Ed. Note: Alright, break it up. And Dan, let Chris be Chris from now on.] 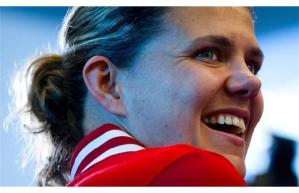 A great athlete. And a great Canadian.

Dan: I like it! I think the Lou Marsh Award is always a pretty interesting comment on the year in Canadian sports. I generally completely forget about it until it gets handed out. I was never thinking ‘Wow, Christine Sinclair has really raised her game to Marsh-ian levels!’ but it’s a very nice honour for a star player in a sport that gets little enough recognition.

I’ve always liked in past when the award has gone to more unheralded athletes, like Chantal Petitclerc (in 2008 for Wheelchair Racing) or Caroline Brunet (in 1999 for rowing). Rightly or wrongly, it seems like these athletes will appreciate the recognition more.

While Sinclair, an Olympian, probably falls more in the category of gold medal Olympians like Adam Von Koeverden and Daniel Igali, I tend to group her more with the former two I’ve mentioned. Her team won just a bronze medal, but this was largely thanks to her superhuman efforts. Igali and Von Koeverden were in individual sports and received world wide recognition for their achievements. For Sinclair to be singled out from a team, and from a sport as unheralded as women’s soccer is refreshing to see and a positive trend for the award.

When the Lou Marsh goes to a Sidney Crosby (or any hockey player) it, fairly or unfairly, feels like they’re just throwing it on the pile. When it goes to someone like Sinclair, it feels like it has real value.

Now Chris, I know everyone’s pretty sick of the subject but I’d definitely like to get your take on the quagmire that is the NHL lockout. It’s a huge story that hasn’t really made any progress for the last several weeks, with the situation looking more and more dire. Is there any hope for the NHL? Or have they totally ruined the goodwill that the rule changes from the previous lockout and the advent of HDTV have brought on?

The Kings won the Cup, but pictures like this are the enduring NHL image of 2012.

Chris: Man, that situation is really devolving.  I can’t see any scenario where the NHL begins its regular season this year.  The owners and players are still light years apart on their demands, and don’t seem to be getting any closer.  At this point, I would predict that the 2012-2013 season is over.

That leaves a long off-season for the two sides to actually sit down and negotiate a legitimate, long-term solution.  The owners’ demands, in my opinion, are a little extreme, when compared with the other big professional leagues.  Particularly, asking for 10 years of NHL service before a player can qualify for unrestricted free agency, is far too long.  Most of the owners’ demands are designed to save small-market, and struggling, NHL franchises, but perhaps the bigger question is: should there be 30 NHL teams?
.
Contraction is an ugly word in sports, but in this case it appears to be a necessary one.  Not only do several teams (Blue Jackets, Panthers, Islanders, for example) struggle to pay their bills, but they also struggle to field reasonably talented lineups.  Even removing two teams could make a substantial difference to the fates of the other 28 teams.  I know from our home base of Toronto, the idea of losing a hockey team seems outrageous, but not every market has that support.  Commissioner Gary Bettman wanted his legacy to be the expansion of the league, but if he does not realize his error, he may be known as the commissioner who almost destroyed the NHL.
.
Note that I said almost.  Hockey is a niche sport, as has been said before, but it is also one that is followed passionately in Canada and regions of the United States.  Teams like Boston, Chicago, the New York Rangers and Minnesota will always have tons of support, and when the league starts again, those arenas will be sold out night after night.  Other markets (Washington, Nashville, Los Angeles) have enough fans to support successful teams, but support will wane in lean times.  With a smaller league, teams will be able to rebuild faster and remain competitive longer, which leads to greater parity.  The NFL does so well in part because of the notion that any team can be competitive any season.  The NHL does not offer that possibility right now, but if it can, then I believe that the league can eventually come back strongly and win back the fans (and TV deals) that have been turned off by this labour dispute.
.
OK, completely changing gears: Miami Heat Championship – good for basketball, or bad for basketball? 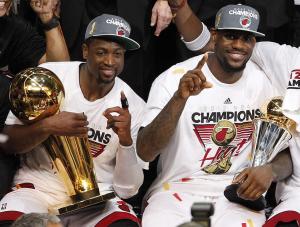 Not one, not two, not three…

Dan: I completely agree with you about contraction. The NHL has overextended itself and while the game is looking fresh (when it’s actually being played), deepening the pool of talent that teams have to choose from can only help improve it further.My other issue is: didn’t this just happen? Didn’t we just lose a whole season so that the owners could implement a salary cap and a system that works? And now they expect sympathy because they forgot to put in something as major as limiting the length of contracts, AND they want relief from the exorbitant contracts that they themselves signed while exploiting their own broken system? It’s ridiculous. Anyway, screw those cats, on to your question!

I think the Miami Heat championship was undoubtedly great for basketball. While there was much debate about whether the ‘super-team’  concept was good for the sport, I really think too much stock was put in it. There have always been super teams. Russell’s Celtics, the Showtime Lakers, Jordan’s Bulls, even Erving’s Sixers and Popovich/Duncan’s Spurs. These were all teams with multiple Hall of Famers on their rosters. It’s just that the way the salary cap structure is these days, players are controlling their own fates more than ever, which creates the illusion of a new concept. It’s not. It’s also a positive for the game that the best player alive (LeBron James) finally got his ring, quashing all the sensationalist story lines about whether or not he had the ability to get it done.

The other reason I think this championship was so great is because it’s created a legitimate and tangible debate about the idea of ‘small ball’ vs traditional positional roles in the NBA. By winning with the roster they did, the Heat fulfilled the dreams of Mike D’Antoni’s Suns teams and every Nellie Ball team that ever existed. They did things in a new and exciting way, which is always good for the sport. You can see the trickle down effect on other teams, with the Celtics now playing traditional power forward Kevin Garnett at centre full time and New York Knicks small forward Carmelo Anthony moving up to play the 4. But you can also see teams going the other way; the Lakers have added two elite bigs, with muddled results while the Memphis Grizzlies have looked downright dominant with Marc Gasol and Zach Randolph in their front court. It’s an exciting and polarizing time to be an NBA fan, and it all started with the Miami Heat.

Speaking of polarizing debates, and moving away from hoops for a minute, I’m curious what you think about one of the years ongoing stories. Lance Armstrong. I don’t think I really need to give any more background than that. Go!

Cheers to the end of the Lance Armstrong era.

Chris: Lance Armstrong was a strange case.  Our colleague Tom Woodhall addressed this very skillfully, as it was happening, but I think what I’ll remember most about Armstrong is the sheer disappointment.  This is on the level of finding out Santa doesn’t exist when you’re a kid.  Armstrong was regarded as a hero to cyclists, Cancer survivors (and those still fighting it) and to Americans in general.  He was seen as the last pillar of purity in a sporting world, and a cycling culture, gone mad with steroid and PED abuse.
Armstrong had stubbornly stood firm against all allegations for over a decade, and had always challenged his accusers to provide proof.  His foe, the USADA, provided circumstantial evidence and eyewitness testimonies from other riders that Armstrong had used PED’s.  But no blood or urine samples ever confirmed this.  The public would have still been willing to believe Armstrong.
.
But he didn’t challenge anymore.  Perhaps he was fed up with the “witch hunt”, perhaps he knew he would be defending himself against these accusations forever, or perhaps he knew that the allegations were true.  We’ll never know for sure, but in my opinion, by not continuing to defend himself, Armstrong essentially admitted to using PEDs during his Tour de France championship years. We are left with a notion that perhaps none of our athletic “heroes” are quite as heroic as we had hoped.  If Armstrong, whose story had inspired and motivated millions, could be found to be a “dirty player”, who could be clean?  A troubling notion for the future of professional, and amateur, athletic competitions.  After all, once the truth about Santa is revealed, the myths of the Easter Bunny and Tooth Fairy soon come crumbling down.
.
And on that hopeful note, that’s all for part one.  In part two, Dan and I discuss the biggest moments of sports in 2012.