Wrestlemania 29 came and went this past weekend and, as always, especially in the past few years, there’s been much discussion/controversy/complaints about the booking. But, let’s be honest, if you know the history of the event it’s relatively easy to predict match outcomes. Year after year, the same wrestling tropes play out that the careful observer (me) will remember. I’m, of course, able to say this now writing a reaction piece rather than a prediction but hey, I won my pool.

Much like last year where Eve (why did you leave?) Torres’s actions decided the result of the twelve man tag match, this year’s six man tag battle rested on the shoulders of one man – one giant: the Big Show. His actions – or inaction – cost his team the fight against the dominant Shield when he decided to mope on the apron instead of saving fellow teammate and notorious douchebag Randy Orton from getting trounced. Whenever there’s even a hint of doubt in the loyalty of a team going into ‘Mania, you can bet on an implosion brought about by shenanigans.

I’m a little reluctant to call Mark Henry an “underdog” but I’m sure most people had picked Ryback to win. Despite getting the upper hand in the previous weeks, Henry had months of losing pay-per-view after pay-per-view, while Ryback was in need of that Wrestlemania Moment™. Nobody ever stopped to remember that Mark Henry, in his nearly twenty year career, has never won a Wrestlemania match, or that he’s nearing retirement and would most likely get his due after years of eating shit sandwiches (mostly figuratively speaking). But you know who kept these facts in mind?

Just let me boast here for a minute.

That’s right. Wrestlemania is chock full of matches where the favourites lose (Kane beating Orton last year or Cody Rhodes beating Rey Mysterio the year before that). These are ‘unexpected’ outcomes but not too surprising in this predetermined world of sports entertainment.

Never Cut an Anti-Semitic Promo Before a Match

Before the Alberto Del Rio vs. Jack Swagger match got underway I was firmly behind the idea of a Swagger win so as to prove his gigantic push was not a waste of WWE resources. But, before Del Rio came out, good ol’ Zeb Colter had a thing or two to say and it made me blush. It was at the Mickey Rooney in Breakfast at Tiffany’s-level of over the top and successful in drawing the right kind of heat just before a match. It was the type of heat where fans need to see the villain get his comeuppance. The only instance of such heat I can remember at Wrestlemania was when JBL berated a Houston crowd at WM25 about drinking lattes and doing pilates only to go on to lose to Rey Mysterio in about ten seconds. However, unlike New Jersey, Houston deserved it. 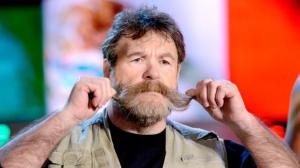 Now this rivalry felt very old school. A dastardly villain (whose heinous acts are all the more villainous due to a real life death) and a hero with this old Western sensibility of being stoic and not too old to dish out punishment (looking at you, Eastwood). A few weeks ago I would have told you CM Punk had a zero percent chance of winning at Wrestlemania and just before the match got underway, I would have said he had even less of a chance. Paul Bearer’s death has been monumental in both making this feud more believable and, unfortunately, more predictable. That urn full of Percy Pringle ashes (that’s one of his names, deal with it) makes too great of a symbol for the story line resolution. Clearly, the image of ‘Taker holding the urn with the gigantic WRESTLEMANIA 29 logo behind him was just too great of a Wrestlemania Moment™ in the eyes of WWE creative. CM Punk had been using that urn so well as a prop that, short of dressing it up as Kane and making it have pretend sex with Katie Vick’s corpse there was about as much heat as a heel can have going into a wrestling match. The match stole the show and it’s likely that the Undertaker’s streak (now at 21-0) won’t be broken, even though he’s built like Dr. Robotnik (or Eggman, depending on your age). Undertaker still has gas left in his tank.

What an ego on this man. It’s not enough to run the company even though you’re not a legit heir, but you have to win retirement matches? Macho Man (WM7), Ric Flair (WM24), Shawn Michaels (WM26) are some of the greatest names EVER in wrestling and have all lost in Wrestlemania matches with a career on the line stipulation. That was the trend until this past Sunday where Triple H, fighting the behemoth and real life MMAer Brock Lesnar, broke from tradition just to look stronger than anyone else in the company. It could be I’m just upset that I got this prediction wrong and need to vent about someone I’ve never met being egotistical but, then again, his past history speaks volumes. The question now is “Where does Brock go from here?” Will he be putting over the actual talent WWE has in their stable or just battling part time wrestlers like Trips, Rock or Taker. I think it will definitely be the latter but the company isn’t doing themselves any favours by keeping their future generation of stars relegated to midcard appearances.

Triple H about to give my ‘Mania prediction a thumbs down.

Cena Will Not Turn Heel

Most of the complaints, as always, have to do with John Cena not turning heel. I have never understood why so many people are adamant about it happening at the main event of Wrestlemania, when it would probably be better when it’s least expected. The only main event heel turn that’s actually happened was at Wrestlemania X-Seven (the Roman numerical system was lost on the WWE in 2001) when Stone Cold Steve Austin joined forces with Vince McMahon to beat the Rock. Even that was later deemed to be a failure, maybe due to spawning the annoying “What?” catchphrase or because it was swept aside in favour of the bigger WCW invasion angle. Whatever the reason, the powers that be don’t seem to be on board with a heel switch on their big night. Granted, Cena should have turned heel about five years ago, and it’s now turned into one of those things that might, and should, be overlooked when it does happen. As for actual Cena vs. The Rock showdown for which Superman was Superman-est, it was definitely better than last year’s bout but not as compelling a story due to the lackluster build up and the fact that it happened last year and will most likely happen again in the future.

Overall, as the general Internet consensus confirms, Wrestlemania 29 was a lackluster show. It might be because the “WWE universe” of fans responds mostly to twists and surprises rather than just the resolution of conflicts that usually happen at ‘Mania. However it also, as I stated before, may be because it was all rather predictable. So much so that I’m about to pull a huge Vince Russo-esque swerve on you: I didn’t win my pool, I merely tied with three other friends.

After last night’s RAW, Alex Correa is happy in knowing that he’s not alone singing Fandango’s tune aloud. Check out his other stories at: www.22pagesuoft.com

2 responses to “Hate to Say He Told You So: Thoughts on Wrestlemania 29”