This past Saturday afternoon I sat down in front of my TV with a bowl of cashews (healthier than chips) and a pitcher of German lager (I went healthy with the cashews) and settled in to watch Bayern Munich take on Borussia Dortmund in the UEFA Champions League Final. We were all out of Triscuits.

The game was being played in London’s famous Wembley Stadium, neutral ground that was chosen before the tournament began. Most analysts and pundits were sure that Bayern Munich would easily dispatch Dortmund, but my heart was pulling for Dortmund for a couple of reasons; 1) They’re the classic overachieving underdog, and 2) They feature three Polish players, including star striker Robert Lewandowski.  Go Polska!

2:38 PM – Pre-game Ceremonies have a gladiator combat theme. That’s probably the way to go when thousands of Germans have landed in England. No historical background there, right? 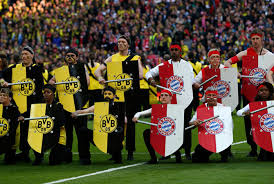 The Germans are coming!!

2:44 PM – The UEFA Champions League anthem is a thing of beauty. I listen to it to get pumped up for jogging, playing soccer, walking to the corner store, etc.

Dortmund Lineup Notes – No Mario Gotze. In an interesting note, he has already agreed to move to another team over the summer. That team? Bayern Munich. He is out nursing a thigh injury, officially, and not protecting his new employers from his own skills.

Bayern Lineup Notes – Mario Gomez on the bench.  He was once considered one of the world’s best.  I never rated him highly.  Obviously I was right.

Dortmund coach Jurgen Klopp looks like a cool Literature professor you might see at the campus pub on a Thursday night. 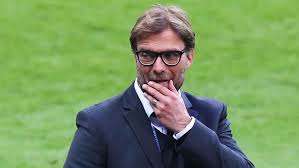 Jurgen Klopp, you old dog, you. 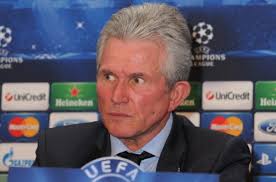 KICK-OFF – Dortmund applies most of the pressure in the first few minutes. Undoubtedly they’re going for an early goal, at which point they would park the team bus in front of their net.

Lewandowski just knows how to settle a soccer ball. It’s like a balloon when it hits his chest. Big strikers need this skill, and many of them don’t have it (see Gomez, Mario) 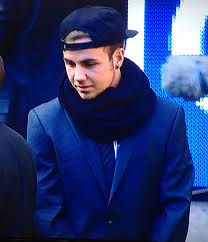 13th minute – Lewandowski just smashed a 30 yarder that Neuer had to jump to save. First “Ooohh” moment of the match. Blasczykowski robbed by Neuer on a low hard redirect a minute later. Dortmund looks up for it; Bayern looks like they think they already won.

Franck Ribery just took a clearance kick to the chest.  That’ll hurt, but it would be much worse if he were a little taller.

22nd minute – Neuer is proving to be the best in the world right now.  Excellent rebound control, calm and collected at all times, doesn’t need to scream at his defenders to prove a point like so many other keepers.

These cashews are making me thirsty. 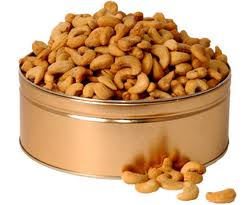 If Dortmund is looking to have a fire sale this summer, teams should be very interested in Mats Hummels, Ilkay Gundogan and Marco Reus. Gotze is already gone, Lewandowski will soon follow.

29th minute – First yellow card of the day given to Bayern’s defender Dante for taking down Reus. Dante is Brazilian, so one name is all that’s needed.

30th minute – Arjen Robben tries to use his left foot to chip Weidenfeller, but Weidenfeller makes the save. Robben’s right foot had a better angle.  Maybe Brian Phillips was correct, Robben has no right foot.

Fantasy Baseball Update – Chris Davis has been a very good pick for my team.  Matt Kemp has not.

35th minute – Lewandowski just took a pass in stride at full speed with ease and forced a very good save out of Neuer.

Bayern attacks are few, but always seem dangerous. These guys have some sort of telepathic connection. Their timing is always excellent.

Neven Subotic is a nice player, but I hate him. More specifically, I hate his decision to play for Serbia after playing youth soccer for the United States at the Under-17 and Under-20 level. One country prepares you for your future, another reaps the rewards. Canadian Soccer is one of the biggest victims of this type of move by young players. Teal Bunbury, Jonathan De Guzman, Asmir Begovic, Alain Rochat, Jacob Lensky, and possibly David Hoilett are just some names of Canadian soccer “traitors”.

43rd minute – Arjen Robben just smacked a shot off of Weidenfeller’s face from less than two yards away. Good save, but I guess Robben is only confident from 25 yards away or more.

HALF-TIME – Heineken is world famous, but it’s not really a good beer in my opinion.  On another note, I like beers.

47th minute – Mario Mandzukic is just a pain in the ass for defenders. Strong and tough, he never quits on a ball in the air, which makes defenders work twice as hard all game.

50th minute – Nothing of note so far this half.  Bayern seems to have taken control of the game.  Lots of intricate passing, but no real chances at goal for either side.

57th minute – Bayern players have taken to writhing on the ground after every collision or jump-ball. Interesting strategy, let’s see how this works for them. And no, soccer players don’t always do that.

60th minute – Bayern has broken the ice.  I like to take the long view on goals, so the breakdown goes something like this – Bayern counter attacked off a Dortmund turnover. Franck Ribery stumbled while accepting a pass and Tomasz Piszczek could have stepped in to make a tackle, but didn’t. Ribery then played a through ball to Robben, who no one seemed to pick up defensively somehow. Robben played a left-footed cross to Mandzukic, who tapped the ball into an open net. 1-0 Bayern.  (Video here)

68th minute – Dante is a clumsy defender, as many Brazilian defenders are, frankly. He kicked Marco Reus in the stomach in the penalty box, which gave Dortmund a penalty kick. Little argument from the Bayern players. The PK was expertly taken by Ilkay Gundogan into the bottom right corner.  1-1. (Watch here)

72nd minute – HOLY CRAP!! Muller almost rolled in an open net goal after rounding Weidenfeller, but Subotic cleared the ball off the line with a desperation slide. This game is heating up now.

74th minute – Yellow cards to Ribery and Grosskreutz.  Lewandowski just popped a long-distance goal, but it was called back for handball. I can’t type these events fast enough, folks.

76th minute – David Alaba ripped a shot that was headed for the top corner, but Weidenfeller punched it away with a dive. Dortmund’s defence is looking shaky. I don’t think they can hold Bayern off for another 14 minutes.

78th minute – Lewandowski just stepped on Jerome Boateng’s ankle after the play. Classless move, and with the amount of cameras on this game, UEFA should step in with fines for garbage like that.

83rd minute – I think Dortmund is content to let this game get to extra time.  Their attacking ambition has disappeared, and the game has slowed considerably as a result. Bayern is still seeking an early game-winner, as they remember what it feels like to lose a Champions League Final on a late goal. (See 2012 UCL Final)

87th minute – Bastian Schweinsteiger just almost sealed the deal for Bayern.  They executed some awesome passing, but Weidenfeller got behind Schweinsteiger’s screamer. Incidentally, Schweinsteiger’s Screamer is going to be the name of my new death metal band.

89th minute – And there it is.  Arjen Robben has finally found Bayern’s second goal after some awful Dortmund defending. To summarize: Franck Ribery, one of the smallest guys on the field, was able to fend off Hummels to win a long ball and squeak a pass through into the penalty box for Robben, who picked up the ball on the sprint and slid the ball neatly past Weidenfeller into the net.  2-1 Bayern, time is running out. (Watch the play)

93rd minute – Hey, here comes Mario Gomez. One minute of action for the big striker. That sounds about right.

FULL TIME – Bayern are this year’s Champions’ League Winners after last year’s disappointing loss to Chelsea. My pick for player of the game is Manuel Neuer, who bailed Bayern out a few times, but I’m sure Robben will get the acclaim.

That wraps up another European Club soccer season. Bayern has already captured the German League and Champions League titles, and now go for a third award in the German Cup this weekend. Meanwhile, Dortmund face a summer where most of their best players will be subject to transfer rumours and increased media focus. Sounds like fun, right? No, I didn’t think so either.