In his Blue Jays season preview, intrepid and embattled Toronto Blue Jays fan Dan Grant battled his desire to be excited for the season vs. his long standing pessimism towards the chances of Toronto sports teams, ingrained in the very fibre of his being by over two decades of across the board futility. In that article, he slayed the demons in his brain, the entity known as ‘Pessimistic Dan’… or so he thought. The battle against Pessimistic Dan continues, but lord knows, the Blue Jays ain’t helping.

At the beginning of May, the two sides of my brain (Pessimistic Dan – PD and Regular Dan – RD) came to a stalemate and agreed to table their debate about the Toronto Blue Jays, saying:

PD: Well why don’t we check back in a month? I’m going to be hanging around anyway, ruining your sports watching. I mean, the Leafs are in the playoffs, how could I not be here?

Well, the Jays aren’t back at .500 now, four days into June, and they certainly weren’t at the end of May. And while this is a Jays specific column, PD isn’t a Jays exclusive sports anti-fan. Since we last spoke, the Leafs have lost in historically spectacular fashion, which has just fueled PD’s antics. It also led me to actually say to a friend, ‘No you don’t get it. It happened because we’re Leafs fans. Not for any other reason’. It was a dark few days in the city. Couple that mess with the Blue Jays up and down play throughout the month of May, and it was a perfect cocoon of negativity, a warm nest of seeping uncertainty that led PD to once again rear his ugly head and inject my beloved sports fandom with poisonous barbs.

However, the Leafs exciting run before the darkness and the improving (sort of) Jays sprinkled in enough positive pockets during the month that PD wasn’t always able to gain the upper hand. I thought a retroactive chart of this vaguely bipolar set of mentalities would be the best way to illustrate the rollercoaster ride that was the month of May. 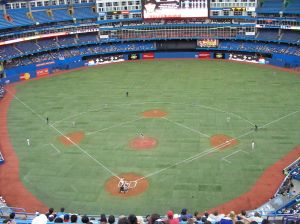 The scene of so much acrimony.

RD: OK! The Leafs are in the playoffs! The Jays are turning things around! Let’s go!

That night: Jays begin four game losing streak against the Red Sox and Mariners. Additionally, the Leafs get destroyed by Boston in Game 1. PD reigns supreme.

PD: Oh yes, that was so sweet. The Mariners! They couldn’t even beat the damn sad sack Mariners! This team is hopeless. The Leafs losing was just gravy.

That night: The Jays salvage the last game of their series against the Mariners and begin a mini three game win streak, knocking off the Tampa Bay Rays as they begin to climb back towards respectability. The win included rallying from a 7-0 deficit to win 8-7 and seemed like it could be a galvanizing point for this Jays team. It was truly a team effort with five different players driving in runs and seven different players scoring. RD is basking in glory.

RD: Everything is the best! The Jays were just off to a slow start, they’re getting it together! Everyone is finally healthy! When we get Reyes back we’ll be unstoppable!

PD: Except J.A. Happ nearly getting killed by a line drive.

RD: Well yes, that was a downer (The Same Page wishes Happ a speedy recovery!). But he’s OK! You can’t get me down now!

PD: The Leafs lost too!

RD: I don’t care, they played well and laid it out in Game 3. If they go that hard, good things are bound to happen. Their spirit is rubbing off on the city and on these Blue Jays!

RD: You know perfectly well what happened, you son of a—

PD: Hey now! Let’s keep it clean. I just wasn’t sure what you meant. Was it the less than successful return of Mister Rickey Romero—

RD (wistfully): I was thinking he’d be a stallion and I could call this column Ricky Ro-May-o…

PD: Or was it the Leafs blowing a sure-fire win and going down 3-1 to Boston?

RD: I think there are still some positives…

PD: What’s that? Baking powder? Could you speak in to my good ear?

That Week: The Jays then proceeded to roll off another three game losing streak, dropping another one to the Rays and the first game of a series with the Red Sox. PD appeared poised to take over for the rest of 2013.

And then, a light in the darkness.

PD: I guess you woke up. The Leafs actually managed a win last night, though they nearly blew it and went home like they were supposed to.

RD: What about the Jays?

That Week: The Jays then began their longest winning streak of the season, reeling off an impressive four wins and handily dealing with the division leading Red Sox at Fenway and…

MAY 12th – LEAFS WIN GAME 6, SEND THE GAME BACK TO BOSTON FOR A DECIDING GAME 7

MAY 13th – LEAFS LOSE GAME 7 BY BLOWING A THREE GOAL LEAD WITH 12 MINUTES LEFT IN THE GAME.

RD: Things got a little hairy after that Leafs loss. The entire city of Toronto felt like this. Not to mention the stupid Jays have gone 3-4 since that tease of a 4 game win streak.

PD: Yeah that Leafs loss will keep me fat until next season. If bad Toronto sports experiences are my fuel, and they are, the Raptors are like giving me a Timmy’s gift card to survive on – you can live, but you don’t live all that well. That’s a high sugar, high sodium diet. The expectations just aren’t there. But that Leafs loss? It’s like if filet mignon was somehow imbued with the healthiness of spinach. I feel like Popeye. There’s enough rage in this city to feed an army of me’s, which I expect it actually is. 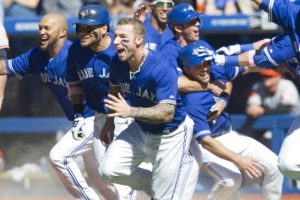 How do you solve a problem like Brett? (Photo: Toronto Star)

RD: I just hate you so much.

PD: Do you hate me really? Or do you hate the way Brett Lawrie is turning out to be a coddled ass? Who is again injured by the way. Or is that R.A. Dickey is at best a number 3 starter who just happened to catch lightning in a bottle last season?

PD: Why? BECAUSE I’M MAKING TOO MUCH SENSE?!

PD: And we finished the month losing three of the last four. Which makes that a 13-15 month of May, which puts a definitive dump on your ‘back to .500’ prediction buddy boy.

PD: The bottom line is this Blue Jays team is in last place. They’re 10.5 games out of first while nobody else in the division is less than 3 games back. They’re a massive disappointment and now they’re starting to lean on the ‘injury’ crutch. And yes, the list is extensive. Josh Johnson just finished a stint on the DL and Brandon Morrow is replacing him there. Hands up if you’re surprised either of these guys got injured—

PD: Really, smart guy? Now take that hand you have up and slap yourself with it, because you deserve it.

PD: Brett Lawrie is hurt again, in an injury eerily similar to that of Jose Reyes, Ricky Romero has actually been dumped from the 40 man roster, meaning he’s indefinitely in the minors, Melky Cabrera is running around on a bum hamstring in one leg and a bum quad in the other, J.A. Happ had a terrible scare and is weeks away from returning, Dickey has battled back and neck issues and is five thousand years old. Sergio Santos is hurt again. This team is mess. But it’s not the injuries. Every team has injuries. Look at the damn Yankees. No Jeter, no A-Rod, no Teixeira until this past week, no Granderson and it doesn’t matter! They have veteran depth and they’re rolling. Injuries are no excuse.

PD: is still injured! Even he couldn’t save this team!

RD: He’s actually way ahead of schedule and could be back soon!

RD: Yeah! And Bautista and Encarnacion have been great! Edwin especially has proved wrong anyone who thought he might be a one hit wonder, me included. There are positives man! The bullpen continues to be a spectacular surprise, as it was picked by many as a pre-season weakness—

RD: Is a luxury we really don’t need right now! Especially since Neil Wagner has emerged as a surprise flamethrower out of the ‘pen.

PD: Fine, OK. There are some silver linings. But this team is still nine games under .500 and we’re a third of the way into the season now. This team was supposed to be rich in starting pitching and besides Mark Buehrle, who has been much better, the rotation has been a wet blanket for all of May. R.A Dickey was actually worse this month and must be pitching hurt. I hope to crap he is anyway, or he’s looking like a massive bust. Josh Johnson barely pitched and it remains to see if he can stay healthy. We’ve talked about Romero, Morrow and Happ. This is a roster being held together with soggy band-aids.

PD: June is make or break for this team, despite the fact I think they’re already broken. 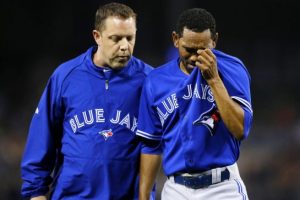 Um, that about sums it up.

RD: I can agree with that, which is shocking because you’re the worst. Worse than this guy. Yeah, him with the ponytail. This team needs to put together a superior month. The return of Reyes should help, but I hate to admit that you’re right. This problem begins and ends with the starting pitching. The hitting has come around in the last month. Even bit players like Lind and Bonifacio have been contributing more than they did in April (though that’s not hard, given the April they had). Someone needs to step up, or heads are going to start to roll come July.

PD: Well, let’s meet back here then! I’ll be glad to rub your face in it, when this team has anchored down last place and those craniums are spinning!

And so the cosmic dance continues. Join us here at the Same Page at the beginning of each month, as RD and PD hash out the ups and downs of this tumultuous Blue Jays season. It’s going to be a bumpy ride.