It was my phone at first, buzzing in my pocket, trying to tell me something. I’ve had the phone for some time now, a Samsung Nexus whatever. When I first got it, it felt top of the line, limitless. In fact, gazing at it now, it still looks like a cutting edge bit of tech. Upon closer inspection, however, I know the phone’s effectiveness has gradually waned towards replacement and extinction. It is more of an albatross now, something to be used under contract. Still, it got buzzing, and notified me that the Raptors were close to pulling off a trade.

They had to do it. Coming into the draft in 2006, new Raptors GM Bryan Colangelo was staring down a pretty weak draft class. In the seven years since that night in June, only three players from that draft have made the All-Star team (and only two of the three are still in the league). Compare that to, say, 2003 where four of the top five picks are locked in to be Hall of Famers (yes, even Chris Bosh probably). More importantly, only one draftee (Rondo) has played a key role for a championship caliber team. The overarching point here is that history will probably vindicate Colangelo for using the Raptors’ first and only ever #1 draft pick on a 7-foot, Italian big man with three point range. Like I said, they had to do it.

Look, it was not all doom and gloom in the Bargnani era. There were good times! When Bargnani was feeling it, he really could shoot from anywhere. He could pull out that great shot fake of his, drawing plodding power forwards up in the air, only to take a huge one-step around them and drive in for a dunk. The Raptors did manage to make the playoffs for a couple of years with Bargnani, and while he, and most of the rest of those teams, folded like a cheap suit, they were there. As fans, I think we always felt there was a chance that it would all come together; the shooting, the defense, maybe an emotion or two. We all wanted to believe that Il Mago would eventually grow into greatness.

But it always, always felt like a question of heart. While Jose Calderon was flapping his arms, and Bosh was making his usual panoply of faces, Bargnani almost always looked like he was thinking about what he’d be doing after the game. He was never as bluntly confrontational as Hedo Turkoglu turned out to be, or as bulldog intense as Kyle Lowry, to say nothing of the more eccentric gallery of characters who have graced the Raptors roster. Bargnani just seemed to float in and float out. Oh, we lost? Ah well. Oh, we won? That’s nice. I realize this is a very armchair assessment and that I have no real idea about the thoughts and feelings of a 27 year-old man I’ve never met, but ask yourself if this profile sounds like a stretch. Bargnani never looked as though he particularly liked playing basketball. He’d be on the court with his gelled hair and his profoundly unshaven face, mouth agape, exuding the feeling that this entire exercise was just no fun.

For the last couple of years, when it became clear that the upwardly mobile (and healthy) days of 2009-2011 were not coming back, I could be heard contending that Bargnani still had value. If he could only get to the right team or situation, I said. He was never built to be a number one scoring option, a franchise cornerstone, a vocal leader. Come on, you stick him on a playoff team as their sixth or seventh man, their Toni Kukoc perhaps, their confidence guy who could shoot you into or out of games and maybe you’d have something. With the Raptors continuing to reel, ahem, I mean rebuild, it was clear that Bargnani had to go, but with that contract (which I believe was for another 32 years at 40 million per), the declining skills AND the suddenly fragile body, it felt like a long shot to get a deal done. Fortunately, this is the NBA. Everybody can be traded. Enter: the New York Knicks.

In the trade, the Knicks are apparently giving up Marcus Camby (FYI 39 years old and thrilled), Steve Novak and a couple of draft picks (including, apparently, a first rounder, which would be a nice little addition to the deal). Let’s not fool ourselves here: the valuable piece is the draft pick. While it would be the peak of high comedy to have Camby, after being drafted by the Raptors half a lifetime ago, retire as a Raptor, I suspect he will never suit up for the team. In fact, I wouldn’t be surprised if he is bought out to fulfill his destiny as the latest ronin aiming for a title. Meanwhile, while Steve Novak is generally a negative on defense, he at least replaces the alleged shooting the Raps just traded away. He essentially gives you everything that Bargnani provides (minus the 7 foot height) at about one third of the cost. Believe me, this is not a Vince Carter fleecing, it is the best the Raptors can do with a future sunk cost. 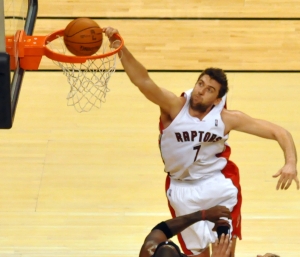 See New York? He can dunk too!

After the merciless boo-birds started soaring last season, and with Consigliere Colangelo finally out of the picture, it was clear that the first order of business for new GM Masai Ujiri was to solve the Bargnani problem. With this deal hopefully approved soon, for better or worse, the Raptors have hatched a new plan to grow around Jonas Valanciunas (good idea), Kyle Lowry (reasonable idea), and Rudy Gay (oh please I hope this works out). While trading a stretch 4, a big man with a long shooting range, in the modern NBA seems crazy on paper, not all European 7 footers can turn into Dirk Nowitzki. The Raptors took their shot and missed.

So there I sat, staring at my phone, looking at the unbelievable news. The Raptors had found a way to trade the untradeable. The player that looked right, but never could figure out a way to play right.

I started scrolling for more news, wanting to read more about the deal, but my phone quickly lost reception and then the battery died. Like the Raptors, I should probably face facts and look to make a deal.

2 responses to “Bye Bye Bargnani: The Raptors Move On”