If you’re reading this, and you’re a fan of our local hockey team, then I won’t trudge up bad memories by reminding you how the last NHL season ended. After the pain of that collapse eventually wore off (for some it still hasn’t), we were left with a sense of optimism. The Leafs are young, fast, and while not quite as tough as Boston, tough enough to at least hang with them for seven games. James Reimer had a brilliant spring in net, Nazem Kadri had become a certified NHL centre, and Phil Kessel, James van Reimsdyk, and Joffrey Lupul proved capable of handling the offensive load. If there were question marks, they were on the blue line, where captain Dion Phaneuf and his troops looked incredibly shaky and generous with the puck throughout most of the Boston series.

As the Stanley Cup playoffs wound down last week, the hockey world shifted its attention to the draft and free agency. The NHL draft doesn’t create instant difference makers like the NBA or NFL drafts do. Rarely is a player drafted and able to join the big club instantly, so the Leafs’ selection of big centre Fredrik Gauthier, though a wise move, will have little impact in the short term. Ditto to centre Carter Verhaeghe, right winger Fabrice Herzog, goalie Antoine Bibeau, and left winger Andreas Johnson. Although Don Cherry might have something to say about Canada’s favourite team picking two European players.

No, free agency and trades would have to be the paths to success for the Maple Leafs in this upcoming season. Most pundits agreed that the Leafs needed help on defence and a front-line centre. Address those areas, and the Leafs would be in great shape, everyone nodded, agreed, and lit their cigars. 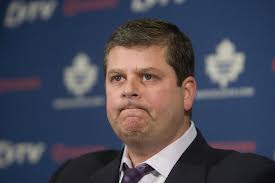 Dave Nonis, what’s going on in that brain?

The Leafs’ first big move of the summer saw them adding goaltender Jonathan Bernier from the Kings for centre Matt Frattin, goalie Ben Scrivens and a 2014 second-round pick. On the face of it, this appears to be a smart move. Bernier is young (younger than Reimer, in fact) and has a solid track record when given playing time. He was the backup to Jonathan Quick in L.A., and Quick is one of hockey’s best goalies, so playing time was rare for Bernier. Scrivens and Frattin were solid citizens, but infrequent contributors.

However, Bernier is currently a restricted free agent. The Leafs received him about a week before his contract expired, so while he was making 1.5 million last year, he could negotiate himself into a nice little raise. Or, some other slimy GM could sign him to an offer sheet, and force the Leafs to match it, though this is considered dirty pool in hockey circles. The worrying part about this scenario is that, two weeks after the trade was completed, Bernier is yet to have signed a contract with the Leafs. 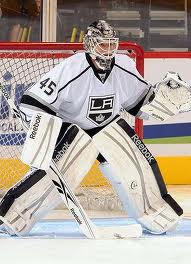 Bernier in goal for the Kings. Photo taken during practice, probably

So goaltending is now solid, with two 25-year-olds with high ceilings. Randy Carlyle will have to sort out how to deploy Bernier and Reimer, but in any event, Leafs fans can be fairly confident in their goaltending next season.

The next move was to acquire Dave Bolland from the Blackhawks, at the expense of three draft picks (2nd Round and 4th Round, 2013; 4th Round 2014). Bolland is a two-time Stanley Cup winner, a big physical centre who can play on both ends, and a Toronto boy. He was a third-liner on an excellent Chicago Blackhawks team (possibly the best hockey team in history?) but he’s not a first-line centre. His stats line up very similarly to, guess who: Matt Frattin. But he will earn 3.4 million dollars this season, whereas Frattin will earn 950,000. 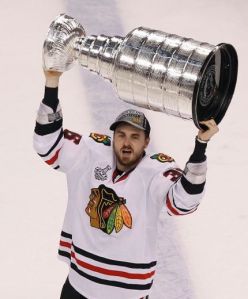 Yeah, yeah, but can you do that in Toronto?

After the Bolland addition, Nonis quickly used compliance buyouts on defenseman Mike Komisarek and centre Mikhail Grabovski. Tyler Bozak, another centre (remember how the Leafs need a number one centre) is an unrestricted free agent and has apparently made an outrageous proposal to the Leafs.

Meanwhile, in other cities, GM’s were busy actually addressing their needs and re-signing their star players. Kris Letang and Claude Giroux re-upped with Pittsburgh and Philadelphia, respectively. The Dallas Stars added Tyler Seguin and Shawn Horcoff via trades (centres, anyone?), while defenseman Keith Ballard jumped from Vancouver to Minnesota.

It’s early, yes, but the list of intriguing free agents that meet Toronto’s criteria is dwindling quickly. Of the remaining centres available, only Stephen Weiss and Derek Roy offer first-line potential, but both also come at a pretty steep price. The Leafs will likely re-sign Bozak, and enter the 2013-2014 season with a slightly different, but unimproved, centre corps. 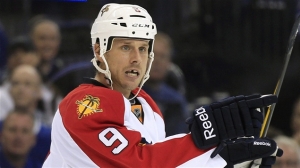 Could this be the face of the Leafs?

On defense, Toronto’s target should be Jeff Schultz. The 27-year-old is a gritty defense-first defenseman who has managed to keep a clean record with only 12 penalty minutes in each of the past three seasons. Schultz would be a big improvement over guys like Mark Fraser and Cody Franson.

All told, this has been a rather anti-climactic summer for Leafs fans. In May, we appeared to be on the brink of having a playoff-calibre team for the next several years. In early July, we have a team that has made no real progress. If this sounds familiar to you as a Toronto sports fan, you’re not alone. We will continue to watch and wait, hopefully not in vain, and see what combination of players hits the ice wearing the blue and white in October. Just, please, don’t tease us anymore. We can’t take it.

2 responses to “Dave Nonis, What Are You Doing?”