There are a lot of colours in Nicolas Winding Refn’s delirious new film Only God Forgives. That’s the first thing you notice. Cold blues, vibrant yellows, dark shadows and bursts of neon. And red. Lots of red. Red lamps, red walls, red clothes and, of course, red blood. Lots of red blood. As the new auteur of violence, Refn has a bold reputation to uphold and a legacy to continue. But, coming off the sumptuous (and violent) highs of his career peak, Drive, I have to wonder if perhaps this kind of cinematic escalation could prove to be Refn’s undoing; an eye for an eye, even with high style, making us all blind. 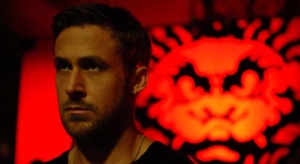 Ryan Gosling can stare with the best of them.

Only God Forgives begins with the slow pan down a short sword blade. As a thematic image, it’s the right one. The film is sharp, inflexible and unafraid of bloodshed. With minimal fuss we are introduced to its star, Ryan Gosling, playing Julian the co-owner of a Thai boxing gym in Bangkok, along with his brother Billy. The brothers say little; actually, Gosling’s Julian doesn’t say more than a couple of words for most of the first third of the movie. His brother Billy (Tom Burke), as it turns out, is a terrible person, kills indiscriminately, ends up dead and Julian must seek revenge. Despite this fairly formulaic setup, that’s when things get interesting.

Stretching his mute intensity to its absolute apex, Gosling plays Julian as a silent Hamlet-like figure. He regards the fighters in his gym, the girls at the bar, the gangsters and cops, but seems largely undecided on what he should do. Oh, he acts up here and there, but as a largely inactive and inept hero to the story (and as a man who apparently has to hire a prostitute for company) his, ahem, sword seems a bit dull. Gosling milks this for all it is worth, acting entirely in the abstract, his eyes attempting to convey multitudes even as the movie swims thickly around him. The reason for his unvoiced ennui becomes apparent when we meet the second significant cast member of Only God Forgives: Kristin Scott Thomas.

Heavily made-up, with long dyed blonde hair, and clothed in ample leopard print, Thomas’ Crystal, the mother of Julian and Billy, hits the screen louder than any of the film’s landed punches. Tasked with acting as both the narrative fulcrum for the film and vocalizing some of its uncomfortable exposition, Thomas never misses a chance to match the lurid set dressing of Refn’s film with her own delicious vamping. Had she been Oedipus’ mother, that tragic hero probably would have kept his father alive so as to keep a buffer between himself and Crystal. I can admit, even with a film that is more subtext than actual text, I enjoyed Thomas’ verbal stabs into the movie. Pitched between two characters that don’t change their facial expression much, she provides the film with some much needed life (and pitch black, darker than dark, bone dry humour).

Kristin Scott Thomas is disappointed in you.

So then who stands against these misguided forces of the Thai underworld? The final entrant into our bizarre dance of death is the Thai actor Vithaya Pansringarm as the cop, Chang. Acting more as an invincible agent of death, justice or just plain destiny, Chang paces through the film as if straight off the pages of a Cormac McCarthy novel; think Judge Holden or Anton Chigurh. Chang exists as a force of nature meting out sentences that appear inescapable. Not having much to do besides stare coldly, speak menacingly, and get into brief, sharply choreographed bouts of violence, the unsung Pansringarm imbues Chang with all the chilling presence he can muster. That Refn chooses to juxtapose images of Chang slicing guys down their centre with shots of him crooning soulfully at a karoake bar is both inexplicable and weirdly charming. At a certain point, you start to feel like Julian, staring incredulously, wondering why these things are even happening.

So the film’s plot slowly saunters along (even at less than 90 minutes, it feels long), giving Refn ample time to stare at all these well-dressed rooms, and the people he has populated them with. Sometimes they act swiftly, or lugubriously. There are motivations there, albeit willfully opaque ones. The problem is that, outside of the main three characters, we generally don’t care what the rest of the movie has to say or do. As has been levied against Refn’s films in the past, the narrative here is thinner than even that aforementioned samurai blade. There is a dance here between mother-son relationships, guilt, and indefatigable justice (or karma?) but, despite even the agile score from Cliff Martinez, it never feels like we’re moving gracefully towards something meaningful. I hate to describe a film as style over substance, because that’s usually used in such an ignorant pejorative sense, but by the end of Only God Forgives, you do really wish Refn would reach out a little bit, maybe meet the audience halfway, and not just to hack off an arm. The film is beautiful like a bruise, or the wrecked face of Gosling; you want to stare at it even as it disgusts (and it does contain the ability to disgust).

It feels appropriate that Refn dedicated this film to Alejandro Jodorowsky, the maniac director of El Topo and The Holy Mountain. Jodorowsky had a another movie (admittedly, I haven’t seen it) released in 1989 called Santa Sangre (or, Holy Blood) about an armless mother who seeks revenge using the able-bodied limbs of her son. Jodorowsky cast his own sons then, and typically played a large part in most of his films. As his disciple, it is unsurprising perhaps that Refn has made a similar bloody movie of doomed revenge couched in mommy issues. Refn, of course, doesn’t appear on camera; he has the perfect avatar in Gosling, his sad eyes turning to anger, to embarrassment, to maybe acceptance. We’re left with a slight film about a man who is just really tired of being humiliated in front of his mother. I suppose we can all relate; the red blood is the first thing we see after all.