What’s the Deal with this Episode?

Each week our gang of New Yorkers were put into and then got out of (well, sometimes) uncomfortable situations. Here is the episode recap of their exploits.

As usual, we’ve got 4 plots. Jerry gets a maid, Cindy, who then becomes his girlfriend. As he eloquently puts it to Elaine, “he hired her from a service”, which we later find out is cleverly named Maid To Order. It’s a pun. 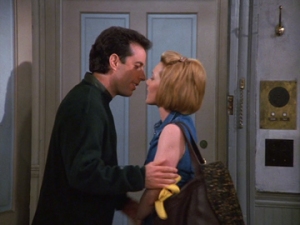 Jerry and his, um, maid.

Eventually both halves of the “somewhat sophisticated” relationship break down and Cindy both breaks up with Jerry and quits being his maid after he refuses to pay her to simply come over and have sex with him without doing any actual cleaning. The star plot of this episode has got to be the storyline that surrounds Kramer. His girlfriend Madeline is moving away to downtown New York. And to make matters worse she has a new 646 area code phone number as New York has run out of 212s. The relationship proves to be too difficult, despite watching Quincy and playing cards together over the phone in an effort to shorten the yawning distance between the two of them, which is really less than 5 miles. Once Kramer finally makes the voyage downtown to visit Madeline he givers her an ultimatum. Move, or it’s over. She chooses the latter, throws him out and Kramer becomes lost downtown.

At the beginning of the episode George reveals that he’s had it with his name and would like to be referred to as T-Bone. Later, while at work, George orders a t-bone steak for lunch in hopes of drumming up interest in his nickname. Watkins from accounting also orders a t-bone and the nickname goes to him, much to George’s chagrin. Later on George confronts Watkins in hopes of convincing him to hand over T-Bone, but his argumentative antics look somewhat monkey-like and Kruger intervenes and bestows the new nickname of “Koko the monkey” on George before he can finally claim T-Bone for himself. It all ends when George learns that a co-worker of Jerry’s maid/girlfriend Cindy is named Koko. George then hires Koko to work at Kruger knowing that Mr. Kruger would never allows two Kokos in the office (as Jerry says, this Kruger guy runs a tight ship). But since this is George we’re talking about here, it gets even worse and he ends up with a new nickname… Gammy.

Elaine gets the short end of the stick in this episode. Her storyline centers around her misfortune of ending up with that same loathsome 646 area code that was a part of Madeline and Kramer’s undoing. This happens after Kramer uses Elaine’s home phone number to sign up for some sort of restaurant menu fax (yes fax, it was 1998) service called Now We’re Cooking. Also a pun (sort of). Elaine ends up with the vile area code after she is forced to change her phone number due to Kramer’s constant faxes ruining her life. Elaine then hits a stroke of luck in finding out that a neighbour in the building, Mrs. Krantz, has died. Elaine then scoops up the prized 212 phone number since Mrs. Krantz obviously no longer needs it and all is restored. Except for one thing: Mrs. Krantz’s grandson Bobby won’t stop calling because he thinks his grandmother is still alive since his parents haven’t told him that she’s dead yet. Seems plausible. Elaine then fakes a death over the phone (also plausible) and that’s the end of that. Like I said, short end of the stick. The best part of Elaine’s storyline is the exchange she has with a man on the street. She gives the man her 646 phone number, which puzzles him as he has never seen one before. Elaine is then forced to explain that it isn’t from New Jersey, it’s a Manhattan number, they just multiplied the area code by three… and then added one to the middle number. Oh, and you have to dial one before it. The man then crumples up phone number and tells Elaine he’s seeing someone.

It’s Really Just Something You Say

Endlessly repeatable and immediately recognizable, here is were we discuss the episode quotes to remember.

In this episode, all of my favourite quotes and exchanges involve the neighbour I wish I actually had: Cosmo Kramer. In Jerry’s apartment where it comes to light that Jerry’s maid is also  moonlighting as his girlfriend:

George: Your girlfriend’s doing your laundry? Kramer (from the other side of the door): He’s sleeping with his maid!

At the diner we have the now legendary counter scene:

This is why no one likes sitting at the counter.

Kramer (while looking over George and Jerry at the counter): Who’s that? Elaine: Well I got a 212 number from this little old lady in my building Mrs. Krantz. Jerry: She didn’t mind? Elaine: No she died. Jerry: Hey that’s great! George: What happened to Mrs. Krantz? Jerry: Elaine got a new number because she died. Kramer: Newman died?

Yadda yadda yadda some misunderstandings about  pie and it all ends in this gem:

Kramer: “Did you hear about Newman?”

After Kramer realizes that a long distance, yet same borough of New York, relationship is much more difficult than he anticipated:

Kramer: Oh ya so what am I supposed to do? Be more like you? All sealed up in here, emotionally unavailable, paying scrub women for sexual favours? No! Jerry! I won’t be like you! Never! I’ll never be like you!

Once the aforementioned relationship goes sour and Madeline throws him out in the middle of downtown we are blessed with the following, now infamous, exchange between Jerry and Kramer which takes place in the form of a collect phone call from “Hey buddy don’t say no!”:

You Know Who I Ran Into Today?

Aside from its hall of fame main cast, Seinfeld had an amazing gallery of side characters. Each episode has a favourite worth talking about. 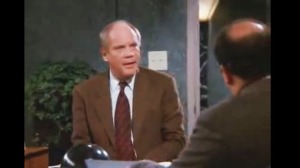 There’s really only one side character in this episode and luckily he is one of my all time favourites: George’s boss, the president of the laughable Kruger Industrial Smoothing company, Mr. Kruger. As “The Maid” is one of the final episodes of the series, this is actually the last time Mr. Kruger makes an appearance. Though he plays much bigger roles in earlier episodes of the show, he does provide one excellent nugget of genius for us all to remember him by: Koko The Monkey. The short-lived nickname will be forever part of the odd, apathetic entity that is Mr. Kruger.

Every classic episode has at least one element that has become part of the cultural lexicon somehow. Here is where we discuss those random elements.

Area codes. Who would have ever thought that three little numbers would ever be something more than what they are (which is a prefix to a 7 digit phone number used for regional routing within the telecommunication network)? But they do. They mean so much more. The area code is a subtle way of saying “I’ve been here longer than you”, “this is my town pal”, or “Oh you’re a 289? Ya, have a nice life.” Subconsciously we’re constantly sizing each other up. Always wondering whose apartment is bigger, who makes more money, who has a nicer car, and the area code is no different.

Every city has an area code hierarchy, and it’s always the original one that is the local king. In New York it’s the 212. It’s one of North America’s original area codes, dating back to when area codes were first implemented in the 1940s. It’s been featured in numerous songs, movies, television shows and there’s even a line of cologne named after it. New York is the 212. Full stop. If you’ve got a 718, a 646, a 917 or God only knows what else then you’re viewed as kind of inferior. If you aren’t fortunate to have a 212 phone number in New York then you’re considered bridge-and-tunnel, gulp, or worse.In Toronto we have a similar dynamic.

Originally it was 416 in the city and 905 in the suburbs. With the rise of cell phones and the overall growth of the region we now have 647 and 437 in the original 416 area of Toronto, while 289 and 365 have invaded the traditional 905 boundaries. While 416 doesn’t quite have the cultural cachet New York’s 212 has, it bares a bit of a resemblance. You can kind of tell a 416er from a 905er around here, can’t you? Us 416ers equate the 905 with minivans, Tim Horton’s drive-thrus, and stretched SUV limos streaming into downtown from the hinterland on Saturday nights, complete with a bunch of woo girls hanging out of the sunroof. And I’m sure some 905ers probably view the 416 as a place that is full of smug, condo dwelling, latte drinking jerks who have nothing better to do than blog about how their area code is better than your area code. Guilty as charged. Around here it goes something like this: 416 = you’re golden. Never let that number go. A 647? Well, I guess you’re OK but try not to tell too many people about it. Oh You’re a 905? Hey sweet minivan!And if you’ve got a 289 then you might as well not exist. The moral of the story here? Choose your area code wisely, it says more about you than you might think.