Paul: Our third last episode of Breaking Bad reminds the audience of Walt and Jesse’s first foray into RV cooking. Much like Percy Shelley’s poem by the same name, ‘Ozymandias’ examines the end of an empire and so needs to show us the humble origins of Heisenberg as well. Then, the large sum of money, that Huell just had to lay on, is revealed to be 80 million dollars; the epitome of the empire’s success. As suddenly as a Todd mood swing, the entire reason for his first venture into the desert and meth business is swiftly taken away in mere moments. Only a random act of Uncle Jack and Todd’s kindness gives him a mere 10 million. However, the death of Hank is the end of all things Walt has held onto. The money is secondary, the Jane secret is revealed, Jesse is gone forever, and the final barrier between Walt and Heisenberg is gone.

“Ozymandias” confirms the Todd character to be more significant than simply connecting Walt to his uncle and once again Todd shows the audience the deep extremes of his bipolarity. An unnecessary act of kindness to make sure Walt’s pride has some financial gain at the end his dark road. Then, unnecessary torture and subjugation of Jesse, using a picture of young Brock to further break Jesse’s spirit. No doubt Jesse’s beleaguered and heartbroken stare at the photo is in part due to the memory of Todd mercilessly murdering a young boy without remorse. Todd continues to create mystery and suspense but his significance to the end of the series is no longer in question.

The final 15 minutes of “Ozymandias” was the most riveting television I have ever witnessed. Unlike so many shows before it, Breaking Bad is up to the task of ending a remarkable series in an outstanding way that is true to its core story developed in episode 1. The end of his family is the end of Walter White.

In these final moments we are witness to the end of an empire, and more importantly, the end of a family. Throughout the series Walt continually justified all his immorality in the name of his family. Now, with knife in hand, Walt looks upon his wife and son who look into his eyes and see him as nothing more than Heisenberg. Walt’s actions and fate in the final two episodes will never be as tragic as that moment when Walt truly loses Skyler and Flynn and is entirely on his own on the road to inevitable ruin. It is those final moments of the episode, where Heisenberg is fully revealed to all and begins his drive into the sunset, that Shelley’s words become so much more than a token poetic allusion. They work to add meaning to the tragic story of a fallen empire, a fallen family, and a fallen man.

My name is Ozymandias, king of kings:
Look on my works, ye Mighty, and despair!
Nothing beside remains. Round the decay
Of that colossal wreck, boundless and bare
The lone and level sands stretch far away.

Daniel: Oh, despair. What more is there to be said? The wounds rendered by Walt have been finally, freely, torn open and no amount of duct tape is going to keep them together. Was there a more heartbreaking – and telling – moment, in all the graphic bits of violence and dismemberment in the history of this show than the quick cut to our pal Steve Gomez lying dead in the sand, killed off-screen in the gap between episodes, buried in a grave no one will ever find? Oh yeah, there was. It was the look on Hank’s face, as he tried to absorb the presence of these new monsters, as he looked at Walt and realized there was absolutely no way he was getting out of that desert. Hank got the hero moment he craved, but in a show as evil as this one, it was an illusion. Look on my works and despair, indeed. 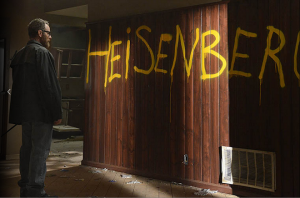 Look on and despair.

We are beyond punch lines now. Too many truths have been spoken. After the dust finally settled on the opening sequence, with Jesse imprisoned by a gang of neo-Nazis, and Walt left standing in a dusty hellscape of his own design, we are reminded of the collateral damage. Strident Marie, armed with a presumed certainty, wants to open the whole case, air it all out. Flynn, forever the dupe, finally learns the truth of his father (and his mother). What is he to say when Walt orders him to get packing. Flynn looks at his father and sees, what? A man he never really knew, a man fighting tooth and nail with his mother. When Walt phones Skyler, he has to know that there are police involved, listening in. He needs to vent. Bryan Cranston puts on the show of his life, crying, gnashing his teeth, angry as all hell. His real son is lost, his ersatz son wants him dead (and wishes he himself were dead), his wife bares a knife. The notion of family is gone. It is a small mercy when Walt leaves Holly at the fire station. He is the danger.

Since we’ve covered the Shelley poem, I’ll mention that whenever I hear the name Ozymandias my mind leaps to Alan Moore’s book Watchmen. Ozymandias is the ultimate villain of that story, a man who thought of and planned for seemingly every contingency. However, Ozy’s horrific triumph, after numerous unspeakable acts in the name of saving humanity, is presumed to be undone by forces he can’t foresee. As the plot spins away from Walt, he yells and curses at his family. Why won’t they just do what he says? Don’t they see that it’s the only way, the only way to put an end to all of this? The story wasn’t supposed to go this way. In Watchmen it is said that nothing ever ends. This may be true from a universal perspective, but for Walt, the Walt with the full head of hair and the gun in the trunk, it ends with the certainty of death. Walt has lost everything, but as has been true since the lies started back in that RV, he will not lose the narrative. Walt has got some things he still needs to do.