On Christmas Eve 2012, as tradition dictated, I did a gift exchange with a woman I’d recently separated from. the first since we stopped cohabitating. She gave me a new leather wallet, something I’d needed for some time. Tucked inside it were gift cards for places I frequented, coffee shops, bookstores, and the like, including one for a chain of electronics stores. She took a moment to point out that particular card had a purpose: it was preloaded, to the penny, taxes included, to the amount it would cost to purchase Grand Theft Auto V upon its release, then predicted for March 2013. Much as she did when she bought me an Xbox five years before to ensure I could play the previous installment of the game, she just knew.

And I watched that release date get pushed back from spring, to summer. The card continued to sit tucked in my wallet. The woman who paid for it would ask me every few months if I still had it, and was surprised when I said I did. I could spend it on something else, she said. Didn’t seem too fair to not have anything to show for a Christmas gift. No, I said. Not a chance. That card’s fate was sealed. Last Tuesday I finally swiped it. 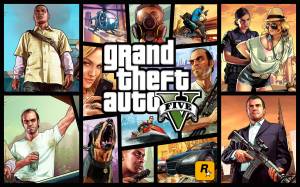 Welcome to the world of GTA5.

A week removed, it would be pointless to submit a review about GTA5.  It’s made over a billion dollars since its release. The gaming press fell over itself to lob perfect scores at it, though perfection is an impossible thing for a game to achieve. Some reviewers have split hairs over the lack of ‘openness’ in this open-world game, something that’s more a fault of this generation’s hardware limitations than any laziness on the developer’s part: those who bemoan the lack of interaction between characters were likely the same who griped about the incessant hangouts required in the previous game. As for the game cutting the player off from areas, a locked building I can’t enter is much more feasible to me than the ‘invisible walls’ cutting off parts of the world that have blighted games for years.

Other commentators have expressed dismay at the continued lack of a female protagonist. True, players will be able to play as female characters in the forthcoming online multiplayer component, but the lack of women as anything other than shrews and sex props in the game proper seems a step back from GTA4, which had both Niko Bellic and The Lost and Damned’s Johnny Klebitz doing jobs for local drug queenpin Elizabeta Torres. Thirty hours in, I’ve yet to see any character on her level, aside from Maude, a surly, obese bail bondswoman who hands out bounty hunter missions to the psychotic meth dealer Trevor Phillips.

Despite the criticisms, both legitimate and unreasonable, there’s no denying Rockstar Games’ return to San Andreas is a startling achievement. In the lead up to the game’s release, itching to finally get my hands on it and looking to take the edge off, I started moving back in the series’ history. I started with GTA4, replayed through its storyline and add-on expansions, then moved further back to GTA: San Andreas, the first game set in V’s environment and the last in the series released for the previous generation of consoles. It’s always enlightening to go back and see how much games have progressed. For a game set in a sunshine state, San Andreas looks perpetually drab (it’s amazing how much lens flare really brings), the character models look like lobster-clawed, human-basset hound mutants, the story’s terrible, the jokes are more puerile than you remember and the whole world feels like it’s made out of cotton candy; nothing has any impact, there’s no weight to any collisions.  And back then we thought this game was awesome! 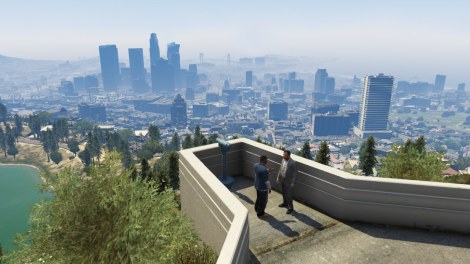 Yeah, the city is big.

There are many criticisms that can be lodged in retrospect against GTA4, but the simple fact is that it took every element of the previous games and did it better. And GTA5 takes them all and refines them again. Remember, this is a studio that won’t be held to the traditional two-year development cycle that demands those sequels constantly get pumped out (they look damn pretty, but honestly, how many more Assassin’s Creed entries do we need?). They were able to take their time, five years to take everything they got right from their other efforts like Red Dead Redemption, Max Payne 3, and L.A. Noire (yes, L.A. Noire did some things right), and work them into the gameplay here. While I’m certain it’s not entirely removed, I’ve yet to have Michael, Franklin or Trevor run around pointlessly in a circle trying to find the door of an automobile while the cops pelt them with bullets, a scenario that brought Niko Bellic down on more than one occasion.

The missions are far more varied, and extend organically from the story line: money is the primary objective, so you set up heists. The player decides from a pair of approaches (usually stealth versus aggressive) and a series of set-up missions unlock to acquire the necessary. The violence, which is plentiful, is seen by the characters as a sort of ‘us-or-them’ byproduct of their chosen profession. These are con men and thieves, they don’t delight in the violence (well, Trevor does), they coldly accept its necessity. As pessimistic a view as they may seem, I find it preferable to the cognitive dissonance that ran throughout GTA4, where one moment Niko would long for a life free of the violence he left behind in the Balkans, while mowing through waves of cops fleeing a gangland assassination because a low-rung Russian mobster told him to. Everything in GTA5, from the mission structure, to the combat, to the driving mechanics, to the damage incurred works better and makes more sense (gone are the days of walking away from a head-on collision that sends the player rocketing through the windshield; that shit’ll kill your ass now). You might not think it’s deserving of the praise being heaped on it, but you should still play it as soon as you can.

For me, returning to a GTA game will always feel sort of like going home. I’ve been a gamer my entire life, since Donkey Kong on the family Coleco*Vision, and these games have been a part of my life for over a decade. From the moment a kid at the youth center I volunteered at handed me a controller and said, “Just go do whatever.” I have been willing to pony up, spend my cash and follow Rockstar wherever they want to take me. That notion of,  “just doing whatever,” was world changing for me, a guy brought up on side scrolling and JRPGs. I built a world for myself in Liberty City, Vice City and Los Santos the way fans of other series insert themselves into Hyrule or Westeros. Is it worth noting that at the time of Vice City’s release I was still living at my parents’ house, having half-flunked out of university with no real sense of what I wanted to do with myself but certain I wanted to be as far away from the small town I was living in as I could, even as I had no plan how to do so?  Yes, yes it is. Tooling around as Tommy Vercetti in a fast car through the 1980’s neon of Vice City, listening to Michael Jackson and Hall and Oates on the in-game radio stations let me feel as though I was somewhere not where I was. Those who are anti-video game might deride that as escapism, which it is. But is it any different from the emotional investment viewers are devoting to Breaking Bad this year? Not really. The difference is, even though I’m ultimately confined to the game map what I do within it is entirely up to me.

When I finally fired up the game last week, I took Franklin up a bit into Blaine County, the rural area north of Los Santos. I took him to a gun range, did some target practice, then drove back to the city through the Vinewood Hills. Seemed like a good spot to snap a photo of the city lights. I pulled him over, the tires of his car crunching in the dirt on the side of the road. I had him hop the fence of one of the surrounding mansions and head into the back yard. He fell into the pool on the way, his clothes soaked and saggy when he climbed out. I lined up the shot with his phone and snapped the photo, which didn’t save (the hiccups brought about by server overload on Rockstar’s “Social Club” website being the game’s real legitimate flaw thus far), but I didn’t care. The sun was coming up over Los Santos, and as I spun the camera around, I could hear wind blowing through the trees around me, a coyote howling in the distance: a moment of quiet and stillness in a game typified by violence and mayhem. I took it in for a moment, walked Franklin back to the car, cranked up the radio and burned rubber back to town, hungry for what secrets the city had in store for me.

I imagine I’ll be staying there a while.

Jordan Ferguson writes about culture at poetryforgravediggers.wordpress.com. His favourite character is Lamar and his favourite radio station is Nonstop Pop FM. Tell no one.

5 responses to “Look At Me Riding: A Week with Grand Theft Auto 5”