The film world has been slow to document the actual day-to-day anguish of slavery. You probably don’t have to think too hard as to why; it’s not a subject with a ton of obvious entertainment value. Now, that’s not to say that movies have avoided the lash entirely, or shied away from the overall historical import of the era, but there is definitely a reticence to reach for specifics. With the release of Steve McQueen’s 12 Years A Slave, we see a film very much concerned with the how of slavery. As the sad horrors of the film mount however, one is left asking mostly why. It is always the why that is most troubling.

Based on a true story, 12 Years A Slave recounts the tale of Solomon Northup, a free black man in pre-Civil War America. He lives in Saratoga, New York with his wife and two children. One night, while travelling with a troupe of performers (Northup is their violinist), he imbibes too much and wakes up in chains. The stink of injustice hangs in the area but the terrible experience of Northup is only beginning. We are bound too, trapped in theatre seats by a difficult history we must acknowledge, revealed by a drama that we only wish could be imaginary.

McQueen, now helming his third feature film, is not shy. His debut feature, Hunger, stared hard at the lives of IRA prisoners during “the Troubles”. It was a film you could almost feel on your skin and in your nose, such was the power of its visuals. His follow up, Shame, a movie about one man’s descent into sexual addiction, is one of the best films of this new decade. Both films were difficult experiences, peering fearlessly into the darkness of past and present lives. Both were anchored by incendiary performances by Michael Fassbender. As a trademark, McQueen’s camera is always probing, looking into wounds that go much further than skin deep. His technique is urgent and, flourishing with 12 Years A Slave, contains a growing naturalistic approach; there is little veneer to separate audience from subject matter.

At the centre of 12 Years A Slave is the aforementioned Solomon Northup as portrayed by Chiwetel Ejiofor. McQueen has said he envisioned Ejiofor for the role. It is a monumental performance. It requires an actor to draw from a deep pool of anger, but that, quite frankly, is the easy part. The strength of Ejiofor’s performance is his maintenance of a rigid dignity. His Northup is a man shackled by the truth, stuck in circumstances that beggar belief. Through a series of episodes, his situation continues to descend into abject horror as he moves south. Along the way we meet the well-assembled supporting cast: Northup is sold by Paul Giamatti, acting indifferently towards his human livestock; bullied by Paul Dano, who can’t not be mewling and odious; modestly cared for by Benedict Cumberpatch, who sadly can only do so much; only to be eventually tormented by Michael Fassbender, playing frenzied zealot plantation owner Edwin Epps. Only Brad Pitt‘s eventual appearance feels out of place, his star power not quite wilting in the summer sun.

The films latter half settles in on the dynamic between Northup, Epps and a young slave girl named Patsey (played with fragile grace by Lupita Nyong’o). Returning again to McQueen’s film world, Fassbender is just as thrilling (and scary) to watch here. His character Epps is embroiled in a disquieting relationship with Patsey. His wife (played by Sarah Paulson) is equally, albeit coolly, vicious. Northup can only stand and watch until he is steadily implicated in this mad, overheated world he desires only to escape. 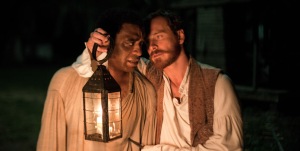 Throughout the film McQueen’s camera does cast its eye to whipping and lynching, and the associated sounds of suffering. But, the infuriating part is the silence. We are asked to look at a culture, and people (both black and white), who have been conditioned to ignore or accept the pain of others. The whites – the people in power – obviously would prefer to maintain the status quo but even the sympathetic among them feel restricted, scared or unable to change the larger culture so unwilling to do anything. Meanwhile, this recurring theme is visualized by repeating scenes of slaves turning the other way. The fear of violence and death is so real and in such proximity at all times; it is not an over exaggeration to say that a wrong word or a lifted glance could result in fatal actions. McQueen foments this overriding sense of fear, making it palpable and terrifying.

It is here we find Ejiofor as Northup struggling to gain purchase, fighting to live and not just survive. The despair is suffocating and McQueen makes sure to keep the threat of overriding hopelessness nearby. Wisely, despite having a length of time in the title, no marking of its passage is seen onscreen. We get only the vaguest sense of how much time has passed by watching Ejiofor’s face lengthen and grey.

So far I’ve described 12 Years A Slave as an unrelenting, unflinching, and horrifying experience. Yet, there is a tragic lyricism to the film. McQueen does not fetishize the violence, he only regards. There are a couple of shots, including the opening, where we see rows of men (slaves) staring at a man giving directions, or later, some natives. They seem to be looking out at the audience, giving a hard tired stare. These are the ghosts of a time we’d rather not look too hard at; the agony, guilt, shame, anger are too great. McQueen is daring us to stare back.

Last year saw Quentin Tarantino’s take on slavery and American history through the lens of a revenge tale. Django Unchained had moments of fearsome power and vicious ugliness, but there was always the din of unreality clattering in the background. With Tarantino, I can make these exceptions, even as his film devolved into an over-the-top bloody mess. 12 Years A Slave offers no such respite. The cathartic release is different. In fact, when that fateful thirteenth year finally does arrive, Northup’s salvation is not vengeance but a quiet piece of justice. McQueen is matter-of-fact right to the end. There is no answer for why, sadly. It just is.