By: The Same Page Team

Welcome back to the Same Page Team’s Three for 3 feature! We got the gang back together to answer three compelling questions for each conference in anticipation of the 2013-2014 NBA season. Join Daniel Reynolds, Dan Grant and Dave Game6ix Osubronie as they attempt to go Three for 3. Read their Eastern Conference preview HERE. Today, the guys talk about the Western Conference.

Who is going to be the biggest first time Western Conference All-Star this season?
.
Grant: Like Josh Smith yesterday, Stephen Curry is a player that already should have been an All-Star. A player who set a new record for three pointers last season, Curry is a sharpshooting playmaker that everyone seems to love. Unlike Smith, it’s not a consistent body of work that is the proof, it was last season’s playoff coming out party for the NBA’s newest superstar. A career 45% three point shooter, who also shoots 90% from the line, Curry deserved a spot on last season’s Western Conference All-Star team but was left off for reasons that remain inexplicable, particularly now, given that the Golden State Warriors are arguably the most fun team to watch in the NBA. The main issue seemed to be a glut of guards, with Chris Paul and Kobe Bryant locks to win the fan voting, Russell Westbrook a deserving candidate, James Harden enjoying his breakout season and Tony Parker as the co-best player on the 1st place team in the conference. With all that in mind, why not just have six guards? It’s the All-Star game! People would rather see Stephen Curry and his electric shooting than staid teammate David Lee, hyper-boring LaMarcus Aldridge (I see you Blazers fans!) and their steady mid-range games.
.
Everything points to this being Curry’s year. Bryant and Westbrook are set to miss significant portions of the season. The christening of the Splash Brothers, the (relative) health of Andrew Bogut, the use of Harrison Barnes as a small-ball four, David Lee’s continued effectiveness on offense and the addition of Andre Iguodala have the Warriors poised to land in the top four, of a conference that is no longer as strong as it once was. Make no mistake, this is all because of Curry. If Curry misses any significant time, this team barely scrapes into the playoffs. With him? They’re in the mix for the Western Conference Finals.It seems like he’s a shoe-in. But his hopes hinge entirely on the health of his ankle, which often seems like it might have been made by this guy. Here’s hoping he can stay healthy and make the first of what should be a multitude of appearances at the mid-season classic.
.
Osubronie: Last year, we saw Damian Lillard take the Rookie of the Year award that was Anthony Davis’ to lose. There are people who believe that Davis was injured for most of the year and thus underperformed, handing the trophy to someone from the field. The fact is Lillard deserved that award and will only continue to improve this year. To add to his short but impressive resume, Lillard will become an All-Star this year, making him the biggest first time addition to the Western Conference in February.

It won’t be easy for Lillard to make the team. The numbers alone prove that injuries to other player will have to play a factor in his first selection. Bryant, Parker, Westbrook, Harden, & Paul are all likely to be chosen as finalists, but Kobe & Russell are both out with no real set date to return. If they are unavailable, Lillard should be able to capitalize on the empty roster spots.

After leading all rookies in minutes last year (3,167), he has proven he is not afraid of hard work. He also led all rookies in points and assists. To cap it all off, he set the rookie record in made three pointers. With a full season behind him, an All-Star selection is the obvious next step in Lillard’s development.

Reynolds: I waffled on this choice for a solid week. On the one hand, Kawhi Leonard seems like a natural to make some sort of leap into the All-Star discussion. He’ll play a huge part on one of the best teams in the conference. His athletic skills will inspire some ‘Wow’ reactions this year. His on-court demeanour, meanwhile, remains delightfully reserved at best. A player like Nicolas Batum has been running around doing similar things to Leonard and never sniffed at the All-Star game.

No, the choice had to be different. With perhaps two guard spots up for grabs (do both Kobe and Westbrook make the game?), who is to say that Ty Lawson, left to his own devices in Denver, can’t pack on a few more points and assists per game and electrify the crowd with a few of his speedy cuts to the basket? New coach Brian Shaw may be all about a more traditional, slow-it-down style (because apparently he doesn’t realize he has both Kenneth Faried and Javale McGee on his team), but Lawson is still going to be the man to make the whole operation sing. Getting on to the Western Conference All-Star team is a serious bloodsport. We’ve already talked up two other deserving guards but I vote anyway for Ty to make it. 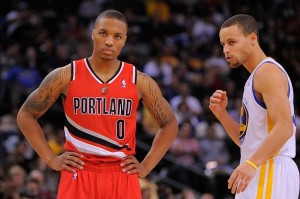 Who will make the All-Star Team?

Which team has the best chance of dethroning the reigning West Conference champs?
.
Grant: In the biggest move of a jam-packed off-season, the Houston Rockets did something no team had ever done before. They lured a major free agent away from the Los Angeles Lakers. Never in NBA history has a player been a Laker, hit free agency and decided ‘Hey, you know what? Thanks but no thanks!’ and left, despite being pursued by heartily by the Lakers. The Lakers were usually the ones grabbing the free agents, either via signings or trades, landing Kareem Abdul-Jabbar, Wilt Chamberlain, Shaquille O’Neal, Karl Malone, Gary Payton and others throughout the years. Players only left LA when they were jettisoned (Shaq), old (Malone/Payton) old and crazy (Chamberlain) or dead (Kareem).
.
Enter Dwight Howard.
.
The very definition of a knucklehead, Dwight might be David Stern’s best case for demanding NBA players attend at least one year of college so that they can learn how humans function with one another in society. I’m not saying you have to go to college to do this, but it wouldn’t’ have hurt Dwight, one of the last guys to jump straight to the league from high school. After doing this to Orlando fans for over a year he then did this to Lakers fans, sort of poetic justice. Or something. What a maroon.
.
All that said, I really think he made the right decision! The Rockets are going to be absolutely terrifying on offense, with the Harden and Howard combination giving them the best inside-outside game in the league. They have lights out shooters beyond Harden, in Chandler Parsons and Donetas Montejunas. Jeremy Lin is past the madness of Linsanity and should settle in as a decent offensive point guard, in the mold of a Jose Calderon. Omer Asik, who played really well for the resurgent Rockets last season, will likely be traded, though coach Kevin McHale has said he will try and play Howard and Asik together. That would be an abomination in terms of free throw percentage and spacing, and neither of those players would be happy sitting in the fourth quarter, so it’s likely Asik will be moved. One suggested trade had Asik heading to New Orleans for sniper Ryan Anderson, a move that makes a ton of sense, given that Anderson played with Howard in Orlando (hopefully no hard feelings?) and would space the floor much more effectively for the Rockets.
.
With the Nuggets missing their two best players from last season, the Grizzlies adjusting to a new coach and seemingly unimproved, the Rockets are a team I could see ending up in the Western Conference Finals and potentially meeting the Heat in the Finals. You don’t think Miami realizes it’ll have to get through Chicago/Indiana in the East and maybe Houston in the West? I think that’s the very reason they’ve taken a flyer on Greg Oden. Houston is going to be excellent and fun to watch to boot.

.
Osubronie: The West has been top heavy for a few years now. In Los Angeles, with the Lakers being the more popular, more accomplished team, it’s been difficult for the L.A. Clippers to get the respect they deserve. They definitely get a fair share of nightly highlight reels. With a new coach at the helm and the best point guard in the league running the offense, the Clippers are ready to take down the defending Western Conference champs.
.
The Clippers main problem is focused around Blake Griffin and DeAndre Jordan. While these two players are physically intimidating, they have not found a way to raise their games to the next level. Enter the Doc Rivers Era. Who better to teach these two how to score, rebound and play defense than a championship caliber coach who spent the last four years with Kevin Garnett. His defensive mentality is exactly what Blake Griffin and DeAndre Jordan need to take this team to the NBA Finals. Jamal Crawford, Darren Collison, J.J. Reddick, Jared Dudley and Matt Barnes are the supporting cast, solidifying a spot in the playoffs. If Doc can get his team to develop a “ubuntu-like” philosophy he had in Boston, then we will see new conference champions in April.
.
Reynolds: Let’s do the math here: The Spurs are #1. They made no major additions or subtractions (we’ll call dropping Gary Neal for Marco Belinelli a wash) and are just about as good this year as they were last year. They’re one year older, sure, but that’s no reason to believe the Spurs won’t be one of the teams in the Finals again.
.
Except: I think the Golden State Warriors may have their number.
.
I think the Clippers are a civil war waiting to happen, while Houston has mutiny potential. The Warriors are all good vibes and positive feelings. They can trot out a small ball lineup of Curry-Thompson-Iguodala-Barnes-Lee or go big and throw the recently resigned Andrew Bogut into the mix. It is easy to forget now, perhaps, that we all believed that the Warriors could beat the Spurs (after pushing their conference semifinal series to 2-2). I know the advanced stats suggest that the Warriors’ point differential could use some work (translation: must improve defense; enter Iguodala). But honestly, math, numbers, they don’t apply. Not when Curry is draining every shot he takes, when Barnes is playing like a wizened vet, when Bogut is being everybody’s favourite teammate, when Iguodala and Thompson are strafing along both sides of the court, and when coach Mark Jackson is preaching from the side lines (plus Kent Bazemore!). In this case, faith wins and everyone can believe.

Will D12 make the difference for Houston? 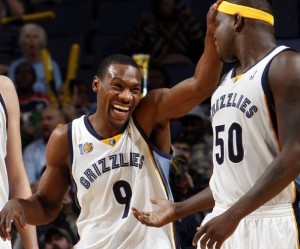 One response to “Three for 3: The NBA Western Conference is Beyond Thunderdome”