Sometimes in life, we make mistakes. Often these things are small and easily correctable – we choose the wrong thing to eat for dinner, we take a bad route when we’re driving somewhere. Some of us like to kick back and relax from our pressures as mayor in a local crack den. You gotta do you. That’s fine, we file these little things away and we learn from them. That’s essentially human nature, isn’t it? Learning from our mistakes and improving upon them the next time is a big part of human evolution.

However, in the world of the NBA, sometimes evolution stalls. With a few notable exceptions, basketball teams hire one of four types of coach when they’re looking for a new one:

Mike D’Antoni has quite the rep. And quite the mustache.

And that’s it. Find me a coach from the past 40 years and I can fit them in to one or more of these boxes. The  ‘Lifers’ I mentioned can be defined as the Hall of Famers or championship winning guys who you’d have difficulty seeing getting fired under any circumstances. They don’t belong on this list because they generally choose their next destination themselves. Think Phil Jackson, Red Auerbach and Pat Riley. In the league right now, I’d put Gregg Popovich, Erik Spolestra and Rick Carlisle on there and that’s it. I like Tom Thibodeau but he’s not there because the Bulls haven’t won yet. He’s on the waiting list. Doc Rivers is a great coach but he just bailed on the league’s most legendary franchise to go coach the Clippers, so the jury is out on him. Everyone else falls into one of the other four boxes.

A-ha!, you say. What about ex-players like Jason Kidd? Well, Kidd is really the first of his kind in that he was hired almost immediately after his retirement, but he’s clearly a Golden Boy mixed with a Hometown Hero. He’s long been thought to have a high basketball IQ, has often been called a ‘coach on the floor’ by pundits, and he’s returning to the Nets franchise, the site of his greatest personal NBA success (despite his championship win coming with Dallas). He generally fits into one of the types.

So these are your coaching candidates. Take the names away, you have to have one of these guys. Let’s think about it. Pretend you’re an NBA GM. You do your due diligence, you meet several candidates, you think about your roster construction, your fan base, your current needs and you try to hire the right coach.

If you’re the LA Lakers executive team, you hire Mike D’Antoni, a Superstar if there ever was one. If you’re the Denver Nuggets executive team, you follow up the exit of your reigning Executive of the Year General Manager Masai Ujiri by signing Brian Shaw, the most Golden of Golden Boys: Phil Jackson coached and trained, has done his time in the trenches, well-liked and respected, distinct style.

They seem like reasonable choices don’t they? A Superstar for the bright lights of LA, and a Golden Boy for a re-tooling Nuggets franchise, looking to build on recent success.

Looks can be deceiving.

In the most recent NBA Power Rankings by veteran beat writer Marc Stein, the Los Angeles Lakers and Denver Nuggets were ranked 17th and 18th, respectively. Now, that’s not terrible. It’s out of the playoffs (top 16 qualify, 8 from each conference), but it’s not world ending either, particularly as we’re only 10-12 games in to the season. That said, these are two teams that have run into some serious issues, be they uncontrollable (Kobe Bryant’s Achilles injury) or controllable (such as style of play). Regardless, these teams have been disappointments. And that starts, for both squads, with the coach.

The 2012-13 season held extremely different fates for these two franchises. The Lakers were hyped as the next juggernaut in the West, engineering off-season acquisitions of Steve Nash and Dwight Howard, pairing them with Kobe Bryant and Pau Gasol to form a quartet of all-stars that was supposed to take the league by storm. We all remember what happened. Head coach Mike Brown was fired a week into the season and Mike D’Antoni was brought in to right the ship; much debate was held over this signing, given D’Antoni’s up-and-down style of play, which clearly suited some (Nash), didn’t seem to suit others (Howard) and left many wondering how Kobe Bryant would function without the ball in his hands. The coaching controversy grew after it was leaked that the legendary Phil Jackson had been fully prepared to return. Kobe actually seemed to do OK; he embraced the system and had one of his best statistical seasons in years. But Gasol fell off the map, struggling with foot injuries and playing out of position with an atypically lumbering Howard, himself still not fully recovered from off-season back surgery. Nash missed time with a broken leg, which basically left the D’Antoni system as a car without an engine. It was an unmitigated disaster that ended with the Lakers being swept in the first round by the San Antonio Spurs. 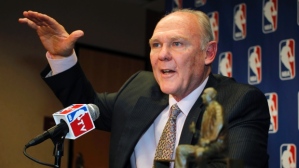 The Nuggets fared much better last season. Super-active GM Ujiri overhauled the roster post-Carmelo, somehow sneaking himself into the Dwight Howard trade, and landing Andre Iguodala. Coupled with the pieces he got for Melo (Danilo Gallinari, Wilson Chandler), the Nuggets became the feel-good surprise of the west, winning 57 games under Coach George Karl. However, an early playoff exit led to Karl’s firing and Ujiri quickly exited to Toronto, when presented with a boatload of cash. In the off-season, the Nuggets became the team to finally bite on Shaw, a Golden Boy, as we mentioned,  who previously had interviewed for seemingly every head-coaching availability in the league prior to his hiring in Denver.

You have may have noticed earlier that I mentioned ‘roster construction’ as a consideration when hiring a coach. The Denver Nuggets were built like a Ferrari, which fit George Karl’s style of play. George Karl enjoyed playing up and down basketball, with lots of 3 point shooting, fast pace and very little defense. He was loose as a goose and the results were generally favourable, at least until the playoffs. Brian Shaw is the opposite of this. He runs a defined offensive system, a derivative of Phil Jackson and Tex Winter’s famous Triangle that was run by Michael Jordan in Chicago and the Shaq/Kobe Lakers, to great success. This system values spot up shooters, great passers and generally intelligent basketball players. So of course, when bringing Shaw in, the Nuggets would again overhaul their roster and give him the tools to succeed, right? Well, not exactly. The roster’s major differences are in that they let their best player go for nothing (Iguodala) to one of their biggest rivals and their best outside shooter (Gallinari) is terribly injured without a defined return date. They’ve taken their biggest asset, the speed and athleticism of Ty Lawson, Kenneth Faried, JaVale McGee and Chandler and basically negated it, simply via their style of play. Lawson has managed to thrive anyway, a credit to his abilities, but the Nuggets are 4-5 and sit 10th in the Conference, ahead of only, you guessed it, the LA Lakers, the young New Orleans Pelicans and two teams that are blatantly tanking the season.

Phil Jackson is disappointed in you.

In LA, the departure of Howard led many to believe that D’Antoni would finally get to play ‘his system’. Pau would move back to centre and have a renaissance, Nash would come back in shape and run the offense and Kobe would return when he could. Well, of the three, only the Kobe part is still on track – he should be back by the end of November. Nash is injured again and out at least two weeks, which brings his games missed total as a Laker to 37; he missed only 37 games his entire 8 seasons in Phoenix (credit to Marc Stein for the stat).  And even when he’s playing, he’s looked old. Which he is. To be honest, I think something the immortal Casey Jones said applies here (skip to the 50:40 mark). Nash looks done as a Ferrari engine, as the kind of player that can run the 7 seconds or less offense night in and night out.

So what’s the solution? Both these teams are sitting here, heads in their hands, with a ton of payroll committed for the remainder of the season. What could they possibly do to fix these problems that seem ingrained in the very fibre of their teams? 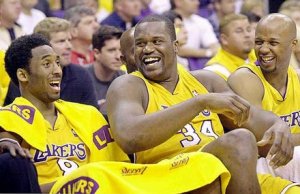 Look at how much fun Kobe and Shaw are having.

You heard me. It’s not something that’s ever happened in the NBA before; Doc Rivers was sent to the Clippers for a pick this past summer, the Heat received picks and cash in compensation from the Magic for their signing of Stan Van Gundy and Kevin Loughery was traded to Atlanta by the Bulls before the 1983 draft, but a coach-for-coach swap has never been consummated.  I’m not sure it’s strictly legal, but it’s something that would fix every issue, at least on the surface, of both franchises.

D’Antoni could go to Denver, get away from Kobe, Pau and most importantly, Jimmy Buss. He could let Ty Lawson and Wilson Chandler run free. He’d have board crashing bigs in McGee and Faried and Gallinari, who enjoyed his best season under D’Antoni’s tutelage in New York. The Nuggets played an up-tempo high possession game under Karl just last season, so they’d transition to the system easily. Add a shooter or two and it’s a perfect fit.

Shaw could return to LA where he cut his teeth as an assistant and enjoyed success as a player. He knows the mercurial Bryant well and his slow down offense would be better suited to the skills of Gasol and the rest of the current Lakers squad. Nash could focus on being an outside shooter, something he has quietly been elite at for years, and Kobe could do what Kobe does best: run the Triangle and dominate the ball. And when these aged veterans are ready to retire or move on (LA has 60 million coming off the books next off-season, before it resigns Bryant), Shaw is young enough to give the franchise continuity. Again it’s a perfect fit.

Sadly if these two franchises stick with their current rosters, it looks like there’s a lot of tough sledding ahead. The Superstar that looks like he might be becoming a Re-Tread and the Golden Boy that would be better as a Hometown Hero; a perfect swap. For now, however, an idea this radical might be one evolution too many.

One response to “I’ve Made a Huge Mistake: Regret and the World of NBA Coaches”