In the realms of sport, entertainment, business: everybody loves a winner. By extension then, everybody must love a win-win trade, right? All the involved parties get what they want, all is right with the universe. Of course, there are those lopsided exchanges with winners and losers – and neutral observers thankful to not be in the latter group. But what about the rare lose-lose deal? The swap where the only outcome is a vague notion of failure, a creeping depression? Yes, my friends, they do exist.

But to listen to that howl of despair – with its incumbent “how did we end up here?” sensibility – one must start from the bottom… and descend. 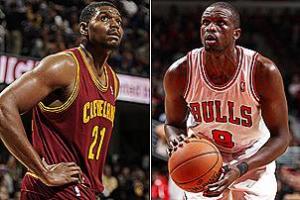 A dense cloud of sadness: Andrew Bynum and Luol Deng.

Last week a trade in the NBA went down. It is the benchmark and impetus for this entire journey. This bummer of a trade involved the Cleveland Cavaliers, a train wreck team in a moon crater of a city, and the Chicago Bulls, easily the most heartbreaking organization in the league. After making the mistake of signing the cantankerous centre Andrew Bynum, the Cavs finally, wisely, shipped him away from the team in an effort to salvage their lost season.

Meanwhile, the Bulls have officially given up. They’ve already waived Bynum and are looking forward only to the luxury tax savings. Once a possible championship contending team, now undone by injury and bad luck, the Bulls have thrown in the towel and started hoarding draft picks. I don’t know about you, but this feels appropriately loser-y to me. Meanwhile, the Cavs get Luol Deng, a solid two-way small forward, at a large price, for half the season. His contract is up at the end of the year and no way does he stay in that terrible situation (bad coach, poor team chemistry, Cleveland residency).

We live in a world where Andrew Bynum, no stranger to lose-lose deals (see: Sixers, Philadelphia and Lakers, L.A.) is now free to sign with a contender. He moped his way out of two shitty situations. The Cavs will remain a mess and the once mighty Bulls are reduced by injury and fearsome salary cap concerns. Sad face.

But this is only the beginning. For I can already hear you asking, “Who cares about these two teams?” So, allow me to swing it back to the local scene.

Horror behind the smiles.

Ever the class act, then-Toronto Blue Jays ace David “Boomer” Wells, he of the impressive beer gut, demanded a trade from the team back in 2000 after a couple of strong seasons. Naturally, the Jays obliged him and in early 2001 traded Wells (then 37 years old) for a bevy of players: Mike Sirotka, Mike Williams, Kevin Beirne, and Brian Simmons. So far so good.

If you’re scoring at home, the Chicago White Sox traded a bunch of younger players and prospects, including the valued 29 year old Mike Sirotka, for an aging – albeit quality – pitcher. So what happened? Well, those poor White Sox had to struggle along with Wells as he suffered through back problems (no kidding) for most of the year, pitched only 100 innings, and had one of the worst statistical seasons of his starting pitching career. What a bummer for White Sox fans.

But wait! Remember those prospects I mentioned? Remember Mike Sirotka? Yeah, none of them (I won’t even list them again) went on to do anything in the major leagues. Sadder still, poor Sirotka never pitched again. Not one more time. Yes, to seal the deal of this awesomely sad trade, it was discovered that Sirotka had a torn labrum, which effectively ended his career. The only bright side to this catastrophe for all involved was that Jays GM Gord Ash was finally, mercifully, fired. (He was replaced by J.P. Riccardi; and so, we’re back to being depressed.)

You know what? Bad sports trades are easy; the numbers don’t lie. Let’s look at something a little more subjective and figure out some of the saddest deals in the world of entertainment.

Too fat to play a grieving father?

Ryan Gosling is fired from The Lovely Bones, is replaced by Mark Wahlberg

Yes, this one is not so much a trade, but it is definitely a Hollywood transaction. Ryan Gosling, fresh off an Oscar nomination for Half Nelson, gets fired for allegedly being too fat to play the lead in Peter Jackson’s adaptation of bestselling novel The Lovely Bones. Could have been a big break at the time. Instead, Gosling goes on to make All Good Things, which, have you even heard of that movie? And then he follows it up with Blue Valentine, an Oscar nominated modest success, though I dare you to watch it again (if the memes are any indication).

But what are we talking about here? The Lovely Bones was something of a mess, not particularly well received (despite some award nominations) and made only 44 million against its 65 million budget. It also steered Peter Jackson back towards the comfort of the Hobbit. And if you’ve seen The Desolation of Smaug, feel free to double down on the sadness quotient. Wahlberg, as per usual, escaped unscathed, bouncing back in some comedies before hitting it big with The Fighter.

In the long run, Gosling and Wahlberg turned out fine. I harbour no ill will, really. So then, we need something uglier.

Moving in an unholy direction.

Charlie Sheen quits Two and a Half Men, is replaced by Ashton Kutcher

Ah, here we are, this one stings a little bit. We as a culture were moving towards a Kutcher-free existence. The Kutcher movie career was spinning into oblivion, the brain dead TV empire had circled the drain, even the Twitter-sphere was becoming blessedly Kutcher free.

But then Charlie Sheen had to go supernova crazy.

The real result? Sheen gets to proliferate on another show and stay within the cultural discourse somehow. While Kutcher, in the midst of vanishing into a tabloid vortex, is propped up on an inexplicably hit show, a movie like Jobs happens, and we are right back to square one.  All of the creative output by both of these men is bad and we are a reduced species. It’s true.

Still, despite my hyperbole, I can’t help but think that these examples inevitably feel trivial. We need weightier subject matter. We need to start digging through history to really get to the bottom of this particular barrel, to find the real cream of the despair crop.

Stay with me here, this was more of a long term angle. On the one hand, Neville Chamberlain thought he was securing “peace for our time” when he let Germany have a bunch of the Sudetenland in Czechoslovakia. From his vantage point it was a fair trade; let Germany take the land, achieve peace in Europe, everybody chills. But we’re talking about Hitler here. Let’s just say the trade didn’t work out. No peace came about in our time, Germany didn’t get to keep the land, and millions of people died.

Remarkably, we’ve reached the nadir of the lose-lose trade. I’m grimly confident that we can take this conceit no further.

Snake sells Eve on eating an apple from the Tree of Knowledge.

Good lord. Now we’ve gone too far. The ultimate lose-lose deal. God is angry at humanity for all time. We no longer get to walk around naked. And then there’s that whole Original Sin business. As unlikely as it sounds, could it be possible that humanity is based on the principles of the lose-lose deal? Somehow only the evil guy won.

I shall resist the urge to compare Andrew Bynum to the devil.