The NHL’s Vancouver Canucks began this season as one of the Western Conference’s best teams. After finishing last season third in the West, hopes were high for the Canucks this year. Instead, they have been hugely disappointing, largely due to the mismatch between head coach John Tortorella and the Canucks’ star players, the Sedin twins.

Tortorella, as anyone who follows hockey knows, is a fiery, hot-tempered coach. He screams at his players, he screams at journalists, he might even scream at his own family. He just seems like that type, you know?

The Sedins, on the other hand, are Swedish.

This was never going to work. 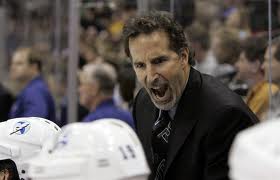 So, as the Canucks wile away their season, I wondered what exactly happens when a previously successful coach, like Tortorella, is unable to repeat his past success with a new team. It seems that regardless of a coach’s mentality or approach, he or she is doomed to failure if they don’t mesh well with their team’s star player.

While this seems obvious, it is worth mentioning that not every successful coach-player relationship features two people with similar personalities. Sometimes, as in electro-magnetism, opposites attract.

These are the pairs that will walk hand-in-hand throughout sports history. Maybe they had some success without the other, but by and large their names will live forever as partners of their sports dynasty.

Jackson was recently hired to a front-office job with the New York Knicks, but his expertise is in coaching. Specifically, he is able to coach great players and teams, and make them championship-level teams. This might sound easy, and lots of armchair coaches tend to say that they could have won “with that roster.” But coaching teams to championship dynasties the way Jackson has, has put him on a whole other level.

Jackson is known for being laid-back, approaching basketball with a ‘zen’ philosophy. It’s unique, but hey, it has worked. Jackson’s style meshed well with the players, more specifically the star players, he was coaching. Michael Jordan is notorious for his determination and motivation. He yelled at teammates, practiced for hours on end, and played defense with a frantic edge, yet was rarely out of position. Kobe Bryant also had many of these same killer-instinct attributes. From my experience as a teacher, when you have motivated people working for you, sometimes the best thing to do is just get out of their way.

Coach Pop took over the Spurs just as Duncan joined the team and began emerging as the Hall-Of-Famer he is destined to be. Duncan was always a thoughtful athlete, and student of the game, but his teaming with Popovich pushed his understanding and motivation into overdrive. Duncan and Popovich would go on to win four NBA Championships together, while narrowly missing a fifth title last Spring. Even with Duncan at the ripe old age age of 37, and surrounded by an aging supporting cast, the Spurs currently lead the excellent Western Conference. They are merciless, meticulous, and business-like in their approach.

Bowman won five Stanley Cups in Montreal in the 1970s, and another three in Detroit, including two consecutively in 1997 and 1998. Cournoyer was already a seasoned veteran by the time Bowman, a young coach at that point, took over the Habs. But under Bowman’s guidance, the Canadiens became the most feared team in hockey, playing a fast-paced, high-scoring style that was years ahead of its time. After stints in Buffalo and Pittsburgh throughout the 1980s and early 1990s, Bowman took the coaching job in Detroit just as Stevie ‘Y’ was rounding into the league’s most talented two-way centreman. Under Bowman and Yzerman, the Red Wings were a wrecking ball throughout the NHL in the 1990s. They scored a ton, they defended their net fiercely (assistant captain Nicklas Lidstrom had something to do with that as well) and they won three Stanley Cups from 1996-97 to 2001-2002.

Uh, I’ll have a pound of the Spicy BBQ.

Tom Brady does not seem to care about endorsement deals (except Uggs obviously), or being the most popular quarterback. He is a fierce taskmaster, and demands perfection from his receivers, running backs, and blockers. Belichick, as we already know, barely cares that there are cameras at the stadiums. He dresses like a super-fan catching a Sunday afternoon game at the local Wild Wing. For both men, football is the number one priority. All else is distraction.

When compiling this list, I tried to find coaches and players who had won championships, or would go on to win championships, elsewhere. That demonstrates their potential when separated from their poisonous partner. So yes, Latrell Sprewell and P.J. Carlesimo were a terrible pair, but they were also terrible on their own, so they don’t make the cut.

The Canucks are falling apart, and coach Torts is definitely the first one that will be shown the exit. The Sedins, meanwhile, are locked up until 2018. While I believe Vancouver’s championship window is closed, Tortorella could probably latch on somewhere next season and make a run at another Stanley Cup. You might not like his style, but you have to respect his passion.

Kobe Bryant death stare, activated! Brown was way overmatched for this team. Too many savvy veterans (Kobe, Steve Nash, Pau Gasol) for a coach who often looks out of his element and out-smarted. Better luck next time, coach.

Practice? Talkin’ bout practice? When your team’s star player questions the importance of daily practice (in the playoffs, no less!), your team might be in trouble. Of course, Brown went on to win an NBA championship with the Detroit Pistons in 2004, with a workhorse, practice-heavy roster of Ben Wallace, Chauncey Billups, and Rasheed Wallace. The key difference here seemed to be that Brown was but a hired gun, who went from team to team freely (sometimes too freely), while Iverson’s blood ran 76ers red.

Do you think Leyland and Bonds sent each other Christmas cards after (NSFW) this? After leaving Pittsburgh, Leyland went on to win the World Series with the Florida Marlins. Bonds became one of the best hitters of all time, but was never able to win a World Series. Maybe he needed more kicks in the ass from a coach like Leyland, or maybe he just needed a team where his protection in the batting order was someone other than Benito Santiago or J.T. Snow.

It’s hard to know what makes good chemistry between a coach and his star player. Each is bringing in their own philosophies, ideas, and baggage. When it works, a team will operate like the gears of a well-oiled machine. But when it goes bad, it goes real bad.