We needed a day to recover. That’s really the only explanation. You rested? Good. We are gathered here today for Day 2 of the Midyear Movie Madness Tournament. The first round, a gentile affair by comparison, is over. Now we get down to serious business – the later rounds, the final four, the championship. The winning film is anointed as the best film of 2014 so far. The losers? Well, most of them are pretty good too. But no matter! To remind you, here’s how the bracket looked at the start. 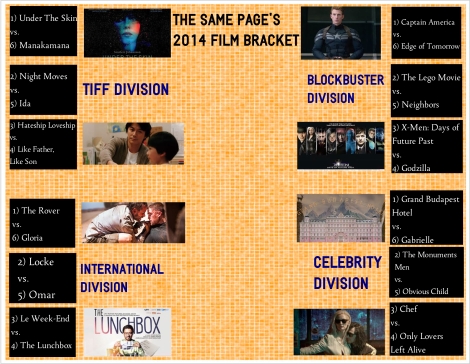 Re-read the column for the Day 1 results. Now, pull yourself together and gird your loins. It’s time for the second round.

So The Grand Budapest Hotel (1) gets a bye, but there’s still some intrigue happening here. As one might expect, the Celebrity Division finds itself stocked with famous movie stars, both male and female, and a couple of superstar directors. Wes Anderson, helmer of The Grand Budapest Hotel, will rest easy for now, much to the delight of his supporters.

The coolest vampires ever?

In a way, both old hat Jim Jarmusch‘s Only Lovers Left Alive and first-timer Gillian Robespierre‘s Obvious Child are about life and living. The latter details the experiences of a 20-something struggling comedienne, who, after getting dumped by her boyfriend, has a one night stand and gets pregnant. Now I know what you’re thinking – didn’t Knocked Up already cover this? Well, no. Obvious Child‘s focus remains resolutely on Jenny Slate as the sometimes slobbish, mostly overwhelmed Donna Stern. She wants to be a creative person, wants to be her own woman, really, and is faced with a decision regarding the funniest subject of all: abortion. Yes, the film goes there. And you know what? Kudos to it.

The former, Only Lovers Left Alive, is a sly commentary on culture, yes, but also captures the essence of time passing, of watching life move at a different pace, of living forever. Tilda Swinton and Tom Hiddleston play the coolest vampires you’ve ever seen. They don’t go after humans though; they conveniently get their blood from a hospital (the chillest doctor ever, played by Jeffrey Wright, helps out). As I said on Day 1, what Only Lovers Left Alive manages is moody, funny, romantic, and slightly horrifying. That the title of the film can refract a different meaning purely by changing its emphasis adds to its pleasure. Obvious Child is a brave and necessary idea, Only Lovers Left Alive is a grand and inventive film.

So we’re working with an Australian film and Indian film and a film out of Palestine. The English, Chileans and, um, English didn’t make the cut. Moving on. The Rover (1) gets the bye here and Guy Pearce dares you to say otherwise.

Irrfan Khan puzzles out meaning in The Lunchbox.

The central conceit here? Complicated love. But first an aside: There’s a character in The Lunchbox named Shaikh who’s introduced as an annoying co-worker and underling to our sad faced protagonist Saajan (Irrfan Khan). We don’t like this guy, and we laugh at his sycophantic ways. But here’s what a film like The Lunchbox can do. While it’s weaving a tale of two unhappy people communicating via heart rending letters in a lunchbox, it finds the time to warm us to Shaikh. He becomes a guy we root for, and as he involves himself in Saajan’s story, we cheer for him to help. The Lunchbox is the kind of film that will have you believing in everyone.

Total reversal with Omar. It is the kind of film that will have you angry at an unwinnable situation and everyone involved. If you’ve seen director Hany Abu-Assad’s other films, you’d understand that he works in the impossible middle ground of occupation and culture clash. His hero here, Omar, is in love but, as the brilliant visual that opens the film shows: it ain’t easy. Nope, that’s Omar scaling a huge wall just to get a chance to see his girl. Sometimes bullets ring off the wall, sometimes he can’t make the climb. In his spare time he plans what some would define as a terrorist attack, but is really nothing more than three confused youths getting in way over their heads. Omar the character needs your sympathy, Omar the film punches you in the gut for thinking you can help. It’s painful, and I’m not sure I want to watch it again.

It is fair to say that Under the Skin (1) gets a tremendous benefit here with the bye in the second round. I like the dearly departed Ida better, but such is the unrelenting nature of the bracket. What we’re left with are two films that have very different feelings towards humanity.

Looking back on my original TIFF assessment, I had Like Father, Like Son as my favourite film from the last festival. It is still hard to dispute. While Night Moves has a fantastically tense tone, there will always been something about Hirokazu Kore-eda’s delicate touch. Both films are looking at what certain people will do when faced with extreme situations.

For Kelly Reichardt and her Night Moves, this means a subtle, tense analysis of the building of a conspiracy, the complicated nesting of emotions and trust, and then, of course, the frantic unwinding of loyalties that happens when shit hits the fan. Meanwhile, Kore-eda takes a different tact. He observes and regards. His characters are also in emotionally fraught situations but they can’t look to explosions or violence for solutions. The questions are simply posed, and in their telling, we get a glimpse at some sort of meaning and truth. It is easy for me to recommend Like Father, Like Son to everyone.

These films all have one thing in common: More. More. And then some more. I love an intimate film as much as the next guy, but when you have a film that can confidently evoke the out-sized comic book world scale as well as Captain America: The Winter Soldier (1) does, you give it the bye and look to see who will be number two. 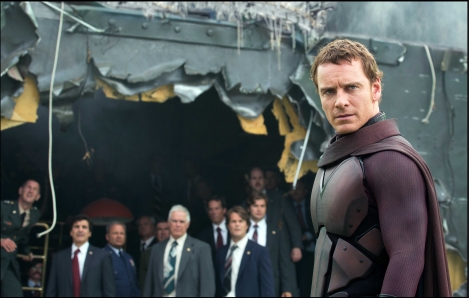 “No way am I losing to a movie about Lego.”

You know, I have a soft spot for The Lego Movie even if it embraces a lot of things about current Lego product that I don’t actually like. I love the absurd animation, the invention of crazy characters, the desire to create and destroy. But I’ll admit, I’m not crazy about all the franchise tie-ins. Yeah, yeah, it’s cute when you have a diffident horndog Batman (played by Will Arnett no less), and I love when Lando Calrissian stops by, but sometimes all the whiz pop effects start to feel a bit hollow. The Lego Movie wisely brings its emotional bearing into the real world to underline the nature of its toy to youth, but its heart still feels slightly out of place.

And yes, OK, X-Men: Days of Future Past has to – is forced to! – jump through some crazy hoops to save itself from itself. The entire third movie in the series is erased, the first standalone Wolverine movie is ignored, Jennifer Lawrence is now the biggest deal (after Rebecca Romijn’s role in the original films was basically a glorified prop), and it leaned into the idea of overt sequalization (no more numbers in the title). But good God, it is amazing to watch amazing actors bring iconic characters to life. Days of Future Past manages to tie in the wild, dark future of the X-universe, with its modern day incarnation, and with its trippy 60s version. And it does it all with a dash of fun (thanks Quicksilver!) and aplomb (thanks a million Fassbender). The X-Men get the nod here. My 11 year old self has defeated my 7 year old self.

Exhaustion sets in but we must go on. If you’re still hanging in with me by this point, I think you’ve got the general idea of every film. Let’s knock this round out lightening fast pro-con style.

Pro: Like Father, Like Son is funny and movie and has a delightful happy ending that feels well-deserved. The acting is solid and the emotional plotting all makes sense.

Con: The film does feel a bit long or shaggy in places (a Kore-eda staple) but nowhere near as diffuse as Under the Skin‘s meandering, Scar-Jo’s presence or no.

Pro: The Lunchbox, as we’ve discussed, is a breathtaking bit of filmmaking. Irrfan Khan’s presence is astounding, lead actress Nimrat Kaur is splendid. The story moves in unpredictable directions and ends on such a beautiful note of bittersweet ambiguity that you’ll be blown back in your chair.

Con: Guy Pearce really does deserve something for his performance in The Rover. Mean, unrelenting, and so, so sad. The Rover becomes a punch line to a really tragic and nihilistic joke, which lessens its overall weight. But still, Pearce is a treasure.

Pro: Captain America:The Winter Soldier provided me with the most fun and surprises at the movies this year. In an era when blockbuster filming has become rote, it was refreshing to just let loose.

Con: X-Men: Days of Future Past bites off waaaay more to chew (and succeeds!), and its action sequences are passably better than Cap’s, but it still feels like a course correction transition more than an actual standalone film.

Pro: Anderson, as per usual, gets killed for his ironic push back methods, but there is such a soaked in melancholy here it’s amazing people still think this way. Anderson always has an effect, but his heart still generously pumps blood.

Con: Now, Jarmusch on the other hand, can also pull off amazing filmic execution, but his irony and obvious dissatisfaction with the crumbling of American culture (Detroit as a setting is used for a reason) is a little more difficult for him to hide. It’s telling that he made a film about vampires; Jarmusch needs the blood.

We’re into the Final Four. Let’s take one last look at the first rounds of the bracket (and catch our breath). 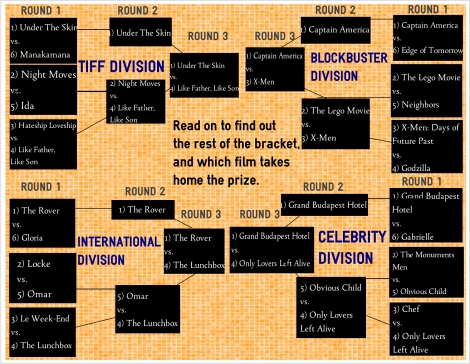 This is some rarefied air we’re in right now. We’ve got two foreign movies, a film from an American iconoclast, and a huge comic book blockbuster. That’s 2014 in a nutshell for me.

Both films maybe run a little long, but only The Lunchbox uses that to its advantage, creating ambiguity where Like Father, Like Son leaves no doubt. Here is where the presence of an actor like Irrfan Khan really cannot be overstated. Whether his Saajan is sadly smoking a cigarette, quietly eating his lunch, or moving with determination through Mumbai, we are on his side. The moment when he opens his lunchbox only to not find a letter from his possible romantic pen pal Ila (NImrat Kaur) is one of such palpable panic. That’s movie magic, people.

The knock here is a simple one. Both films actually have a lot of action. The defeated one here deals in huge set pieces involving exploding helicarriers and collapsing buildings, but it always seems to wrestle with how to do it. Not so with Grand Budapest Hotel. As usual, Anderson knows exactly what he is doing, where he wants to go, and how he wants to get there. The story of Ralph Fiennes’ Gustave H. is at turns comic and tragic, and while Captain America is a man out of history, Gustave is a man claimed by history. Our heart goes out to him, even as we zip along on Anderson’s madcap, farcical little journey.

And now, without further adieu…

It’s not The Lunchbox.

And there you have it. The Lunchbox is your best film of 2014 so far. Let’s give it a chance to celebrate its title before being totally forgotten in the second half of the year in lieu of the dozens of well-positioned award-bait movies still to come. As for me, I’m going to go take a nap.