Alex Anthopoulos is notoriously tight lipped. Even when he talks, he doesn’t say much. With Toronto’s General Manager currently on the hot seat with fans and media, our resident intrepid reporter/tortured Blue Jays fan Dan Grant wanted to get a better feel for how things were going with the hometown Blue Birds. So, he put in a request to interview the Toronto Blue Jays point man.

His request was summarily denied.

This is the interview he made up an interview instead. Again.

Alex Anthopoulos: You too, Douglas! You know how much I love these fake interviews. It’s a nice change from the real thing.

DG: It’s Dan. But yeah, I can only imagine. You’ve really been getting raked over the coals lately.

AA: Yeah, it’s getting hotter than a divorceé at the Chick N’ Deli up in here!

DG: Moving on. I thought I’d give you a chance to respond to some of your critics. Maybe we can work through some of the issues that have the fans all hot and bothered? They’re calling for your head!

AA: Hey, a chance to respond would be nice. I used to be the golden boy! Remember that? (sighs wistfully) The champagne used to flow like root beer!

DG: I’m not even sure what that means. But that stuff was wearing off even before the season started. Don’t you remember the last time we fake talked?

AA: Sure but now descriptions like ‘ninja’ and ‘wunderkind’ have been replaced with ’embattled’ and ‘much-maligned’! It’s a lazy journalistic cyclone of buzz words. Get a thesaurus already.

DG: Indubitably! But, yeah, that’s kind of how it works my man. It’s a what-have-you-done-for-me-lately? kind of business, now more than ever. So how about this season? Do you see any positives?

DG: That is not a popular stance.

AA: I am aware. Last time I said as much around the office, Beeston flicked cigar ash in my eyes. 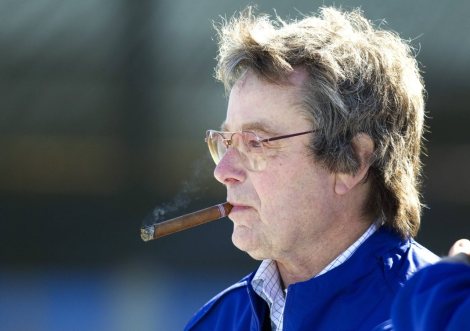 Paul Beeston Fake Quote: “He’s lucky I didn’t put it out on his face!” Well then.

DG: Yikes, rough go. Well, let me give you some of the perceived negatives and you can speak your mind. Sound good?

DG: It’s odd that you always remember the D but never quite… never mind. Here we go:

1. The starting rotation is being held together with masking tape.

2. You failed to add depth both before the season and at the trade deadline.

3. You were silly to rely on Brandon Morrow, given his injury history.

4. You were the one who extended Ricky Romero, who is on the books for another season at 7.5 million–

AA: That’s fine but let me get at some of those first:

Firstly, and for hopefully the last time, we had a deal with Ervin Santana. He agreed to a contract and then he backed out. That is the long and short of it. It was equal money and he chose Atlanta.

Secondly, we were hoping Morrow could come back but we certainly weren’t relying on him. We had Dickey, Buehrle, Happ and Hutchison and our pursuit of Santana shows that we were aware adding depth was a necessity. We planned on promoting Stroman at some point during the season as well and had Todd Redmond and Dustin McGowan as band-aid solutions in case of injury. Morrow had a solid 2011, improved in 2012 and has fallen off the cliff since. He’s off the books after this year. You miss 100% of the shots you don’t take. Some Canadian guy said that.

DG: OK. Compelling points I suppose. I do think people forget that about Santana. You were pretty blameless there.

AA: I know that and you know that but somehow it gets thrown on the pile. People forget that our ‘choices’ were supposed to be between Santana and Ubaldo Jimenez (5.89 ERA, 1.54 WHIP). We at least went for the good one. He just turned out to be a wimp who wanted to pitch in the National League!

DG: Fair enough. What about the trade deadline? Did you really have to stand completely pat?

AA: We didn’t Declan! We added Danny Valencia, we added Nolan Reimold. We were purportedly days away from getting Encarnacion and Lawrie back. We were set to have the same team that went 21-9 in May back for the first time since then. We’ve just been hammered by injuries.

DG: I know you’re not going to blame injuries. Everyone has injuries.

AA: Listen, I’ll fake blame it on anything I fake want! Yes other teams have injuries. Baltimore has Matt Wieters out for the year and Manny Machado has missed big chunks. Oakland lost two key starting pitchers at the beginning of the year so they went for broke. Detroit has had Victor Martinez banged up for periods of time. They’re all still winning. And of course, everyone has other nagging injuries. This is baseball. But absolutely nobody, not one team, lost their best hitter for more than 30 games right smack in the middle of the year. Just us. 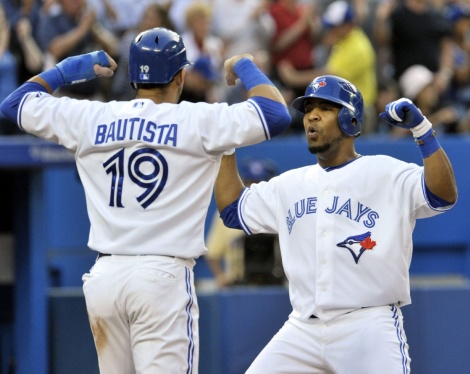 DG: All right, but these things happen. You have to deal with it. Did that one really make such a big difference?

AA: Absolutely it did, because it wasn’t just him. Without Edwin in the lineup, we went 16-18. Ten of those losses were by three runs or less. Compound missing him with missing Adam Lind and Brett Lawrie (out of for the same time period, if not longer) and how much better would we be if we’d managed to win even half of those games? Suddenly a spiraling team is 21-13 over the same period, much closer to that elite May mark. The devil is in the details.

DG: I do remember seeing a lot of rally’s die in the Francisco/Goins/Gose/Kawasaki/Thole/Tolleson quagmire at the bottom of the order.

AA: Right and we love those guys! They’ve kept us afloat, which is what you need your depth to do. But having them all getting consistent at bats just isn’t a winning formula. You need your stars.

DG: Fine, so the injuries were and are bad. Then why didn’t you add through a trade? What did you think of your players calling you out?

AA: Listen Derek. Can I call you Derek?

DG: I mean, you can? But whether you should or not–

AA: Derek, let me fake tell you something. I would have loved to add Jeff Samardzija or David Price or any of the big names that moved. Loved it. But the asking price was Stroman/Sanchez/Hutchison plus more. I mean did you see what Oakland and the Tigers gave up? Top prospects plus big league talent. That was the starting point for negotiations. And what happens if we do that? What happens if we give up all those prospects, and we wind up missing the playoffs or being a quick out? Where are we then? Melky and Rasmus are free agents, Buehrle is starting to look his age, Bautista is going to be 35. We need youth. We need to keep our homegrown talent in house. A big trade like that would have meant we were a worse team now and a worse team in the future.

DG: I actually couldn’t agree more on that one. Obviously Dickey and Buerhle will be back next season and J.A. Happ’s option is probably going to get picked up but having Stroman, Sanchez and Hutchison fighting for those final two spots in the rotation is something I’m very much looking forward to.

AA: Me too! Dan Norris is also possibly the greatest man alive and he should start the season in Triple A Buffalo. You mentioned depth? Found it! Dickey and Buerhle will be back but they’re both on expiring deals. All the names you mentioned will be in the mix. Roberto Osuna is probably a candidate for 2016 but he’s electric. Sean Reid-Foley and Jeff Hoffman are names to consider for the future. The depth is being rebuilt. We really decimated it getting the Marlins and Mets deals done in 2012. And that’s what you do – every prospect can’t make your team. But some of them absolutely have to.

As for them calling me out, I just think they’re passionate. They’re competitive. They were asked an honest question and gave an honest answer. More is being made of it than is really necessary.

Marcus Stroman is the bridge to a bright future for the Jays rotation. But what about this season?

DG: Alright, so long term, I get it. There are reasons to like what’s coming down the pipeline. Earlier, however, you mentioned ‘positives’ for this season. Care to elaborate?

AA: People are pointing to us leading the division mid-season for such a long time period as a negative, since we’ve fallen off. I think it was a good experience for the team. It gave them real concrete results to point to, a standard to be held to. They are that good and that is where expectations should lie. Beyond that, Melky Cabrera has been great. Jose Reyes and Jose Bautista have both been healthy, a problem last season. Marcus Stroman has been better than we could have hoped for. Aaron Sanchez has looked dominant in limited innings. Dioner Navarro has really calmed things down behind the plate, a huge problem last year. All of these are things that needed to go right for us to have a winning season and all are repeatable in the future. And this season isn’t over! Yes we’re four games out of the Wild Card right now but so what? We’re just as a capable as any other team of getting hot. There are 35 games left. That’s more than a fifth of the season. No, it won’t be easy. But why would it be? We’re going to hang in until the end.

AA: I don’t mean to embarrass you, but it’s Alex. Not a hard one to remember. You’re a journalist!

DG: Do you think you should be fired?

DG: Good enough! Fake talk to you in the off-season?

AA: You can fake count on it.

One response to “(Another) Completely Fake Interview with Alex Anthopoulos”