When was the last time you sang happy birthday to someone? Was it at your favourite uncle’s 50th, or maybe your child’s first? For me, it was earlier this month during the quarter-finals of the Rogers Cup tennis tournament in Toronto, with hundreds of thousands of dollars on the line for its competitors. 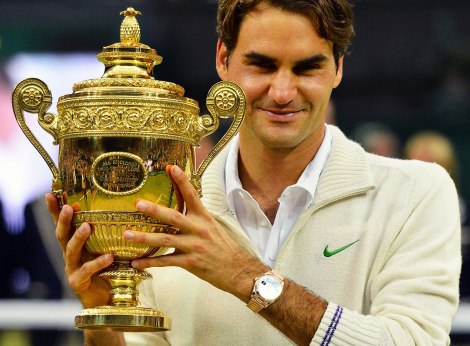 One part of the Roger Federer Effect? Trophies.

At 33, Roger Federer is perhaps a more polarizing figure now then he was during his prime. He’s supposed to be “old” and “washed up,” and yet as I write this he is coming off his 22nd Masters event at the Rogers Cup. His competitor in the quarter-final, David Ferrer, had to take in a crowd upwards of 10,000 people as they stopped a tennis match to sing Happy Birthday to their favourite tennis player. Such is the case all around the world with Mr. Federer. He’s converted the passive fans to super fans, he’s made all of us Swiss at heart, and he can turn even supporters of other players against them. Federer ultimately lost in the finals of the Rogers Cup to Jo-Wilfred Tsonga, but it was hard to shake that moment from my memory. I dub this “the Federer effect.”

It’s well known that Federer is a sight to see. His play is something to go out of your way for. You should see me prior to every Federer match. I end up an emotional wreck much like Homer Simpson awaiting the arrival of Frank Grimes (skip to 10:40). In a time when the Gentleman’s game is at its all time best, we are beyond spoiled as fans. Between the ferocity and tenacity of Rafa Nadal, and the kinetic and ridiculous Novak Djokovic, we have had the chance to see some of the world’s best go head-to-head all the time. But Federer epitomizes what it means to be a superstar. Along with his gazelle like motion, and glorious one armed back hand, he seems to do it all without breaking a sweat. When Nadal and Djokovic grunt and dive and slide, we awe because they make the game look incredibly difficult. But when Federer glides, with one hand on the racquet and one hand tucking his hairs behind his ears, we think to ourselves if he can do it, why cant I?

The gap between Nadal, Djokovic, Federer (and Andy Murray) and the rest of the field is wide. How can you make it to the quarter-finals of a tournament when you are destined for a collision with one of those four?  How are you supposed to gain tour points when the top quartet are taking them all for themselves? But, with Federer aging, and Nadal and Djokovic perhaps exiting their prime, who can take the mantle and do their best to hold it?

Is Raonic next in line?

Number six seed, and Thornhill’s own Milos Raonic is an enjoyable player to watch. His offensive game is nothing to scoff at, and his ability to create openings off his remarkable serve have led many to suggest he could win a major tournament in the near future.  Of course, near is a relative term with the aforementioned top four dominating tennis majors since blogging even existed. Raonic, like all tennis players, has his limitations. His ability to protect his serve is great but his inability to break his opponent’s serve leaves him vulnerable to losses. He has a ways to go before having a chance at a title.

In my eyes, the true man to watch in upcoming tournaments is Grigor Dimitrov. When you’re dubbed “Mini Fed” you’re expected to tear through tennis like Roger did. Dimitrov is as smooth and talented as Federer, but at such a young age he still lacks Federer’s consistency and mental toughness. That being said, watching him gives you the feels – the “Federer feels.” At some points you smile in awe, and think everything will be OK when Roger retires. Perhaps we will have to wait a while longer until we see these two blossom into consistent threats to strip the mantle from the core four. But If a glimmer of hope exists that this golden age will continue, it lives through the racquets of Raonic and Dimitrov.

The offensive game of tennis is perhaps considered archaic these days when most players have become excellent returners. (Why has the game become so defensive you ask? A partial explanation can be attributed to Roger Federer or what others in the game like to also call the “Federer Effect.”) If tennis wishes to continue to thrive, we must hope that Raonic and Dimitrov – who both play an offensive game, mind you – take centre stage. If they do, we may be in luck to experience another generation of dominance. If not, then we’ll have to settle for the top three we have now for only a few more birthdays.

Keep an eye out for Raonic and Dimitrov as Day 2 of the US Open continues today.