It’s no secret that the amount of films and TV shows shot in the city of Toronto continues to rise. Between FX’s The Strain (as New York) and recent films like Robocop (as Detroit), Toronto has already been given its due as a city worthy of cinematic relevance.

Why, then, aren’t there more movies in which Toronto actually gets to be Toronto? Outside of the relatively recent (and relative bomb) Scott Pilgrim vs. The World and the little seen Take This Waltz, opportunities for a star-making Toronto turn have been few and far between.

Fortunately, the newest film from Canadian director Michael Dowse (of Fubar and Goon fame) is looking to change that. He leads the Daniel Radcliffe and Zoe Kazan vehicle The F Word. And despite a name change for its roll-out south of the border, the film is aggressively being marketed as the latest in a line of urbane – and yes, quirky – romantic comedies. 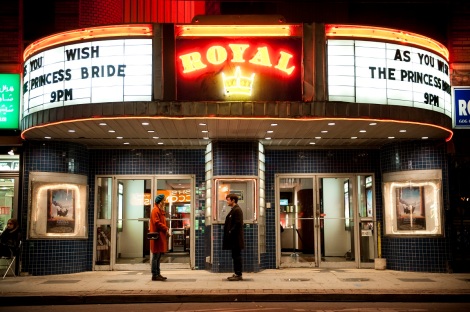 The F Word: Did I mention this movie takes place in Toronto?

The F Word centres on two young people, Wallace (Radcliffe) and Chantry (Kazan). (Let’s try to look past the fact that no one in real life has those two names.) He’s a British medical school drop-out who works a dead-end job while living with his sister Ellie (Jemima Rooper), a single mom, and moons about the city with his far more radical friend Allan (Adam Driver). Chantry’s a studio animator who lives with her boyfriend of five years, Ben (Rafe Spall), while doing her best to corral her own wanton sister Dalia (Megan Park). The two meet at a party and, after Chantry mentions having a boyfriend, part ways for good. That is, of course, until a chance encounter gives them a second chance to just be friends. Hence, the titular F word.

As is always the case though, feelings develop and the pair grow together and fall apart and a happy ending comes on like a well-intentioned yet inevitable freight train.

First and foremost, this is a Toronto film. That’s almost reason enough for me to recommend seeing The F Word. It has fun at Spin, enjoys the city’s boardwalk, and finds a way for people to leave the Royal Cinema in search of food only to end up across the city at the George Street Diner. Seeing Toronto as Toronto warms my cold, cynical heart. Let me be clear, however, that it’s not the only reason to care about The F Word. If you’ve seen trailers for the execrable-looking Dr. Cabbie, which appears to want to stupidly offend as many people as possible, you’ll know that a Toronto location does not necessarily guarantee a watchable film.

The F Word is also a Daniel Radcliffe film which is noteworthy because, hey, Daniel Radcliffe is in a film and it doesn’t have Harry or Potter in the title. Despite being thrust into movie stardom by virtue of playing one of the most recognizable characters in pop culture for a solid decade plus, Radcliffe has laboured to push his way into the broader film world. And in many ways, this struggle makes sense.

Radcliffe is small and angular looking; he doesn’t particularly command the screen as a leading man. He’s English in that wilting, diffident way (a Hugh Grant-ian kind of thing) but he’s not really naturally charming enough to pull it off. So, to see him in The F Word is actually endearing. He’s trying his hand – after stage plays and horror movies and Allan Ginsberg – as a romantic lead. We can applaud him for the attempt.

Similarly, there’s the curious case of Zoe Kazan who, if you’ve checked out her IMDB page lately, appears to have been in numerous films without making much of an impact. I saw her recently in Me and Orson Welles and was mildly seduced. She managed to impress me despite having to act in scenes adjacent to ones wholly owned by Claire Danes and Christian McKay (as Welles, a titanic achievement I assure you). Coupling her with Radcliffe creates a pairing found generously off-centre in terms of the romantic comedic norm. As a result, we get a spark of something intriguing, even if the film is not completely successful.

I’d also like to offer up support for Driver’s continuing absurdist career – seriously, the man never met a line reading he couldn’t give a strange cadence to – but the upcoming Star Wars bonanza will do that for me. And sure, let’s give a shout out to home-grown star-in-the-making Mackenzie Davis as Driver’s other half for giving off some serious vibes, man.

So to sum up: your mileage (kilometre-age?) depends on Toronto, and your tolerance of Radcliffe (I’m still fairly indifferent) and Kazan (mine is pretty high). Have at it.

Daniel Radcliffe and Zoe Kazan would like you to watch their movie.

I’ll say this: The F Word is a determined film despite its lapses. It wholly embraces the archetypes and tropes it knows it has to use to tell its story. The script – by Elan Mastai – feels largely overwritten and is not half as charming as it thinks it is. But it lets Adam Driver run wild (to the film’s benefit) and it does its best to get out of its own way (twee interstitial animated elements and Patrick Watson soundtrack notwithstanding).

You’ll applaud Radcliffe for doing his best to break out of the ‘child actor, creepy looking man’ cast. You’ll appreciate Kazan’s continued efforts to lock down the ‘adorkable’ field left vacant by Zooey Deschanel’s move to TV. And if you’re like me, you’ll be happy that Michael Dowse is still getting reasonably big time work. (But seriously Dowse, just leave Goon 2 alone; know when to go out on top.)

The Verdict: If you’re stuck for a date night movie, or you want to just appreciate Toronto playing itself on the big screen, I’d say you can do much worse than watching a film like The F Word. It may have you rolling your eyes at times, but it shouldn’t make you feel embarrassed to come from Canada. And given the history of English-language films in this country, that’s saying something.