She stands alone on stage, armed only with a deep-red, large-bodied guitar: a 1969 Harmony Rocket that she has described as “well-loved, despite being almost nothing but problems.” She quietly addresses the audience and begins to play, her eyes closing shut; her fingerpicking sometimes sounds unsure at first, but hits on a circular, entrancing rhythm. This in itself may not be enough to hush the assembled crowd, but then she begins to sing, in a voice that is wavering and vulnerable – haunted, maybe? – a warbling timbre, soft yet somehow able to rise above the warm, humming tones of her guitar. Some ascribe Castle’s unconventional voice to an “old soul”, and her songs breathe strange, lonely lives of their own, sometimes sounding of a piece with the more occult branch of Toronto bands, evoking spooky autumnal gatherings in the woods (Timber Timbre, Tasseomancy, Wyrd Visions, early Austra)[1], and yet you feel safe joining her there, falling under a spell. And then all too soon her set is over, leaving you a little stunned, trying to remember who the headliner is again.

Watching Jennifer Castle captivate (a steadily-decreasing number of) neophytes at gigs around this city over the last three years has been enjoyable in itself, but on top of this, each show has been arrestingly different – Castle might give a song a stark, forbidding tone one night, and attack the same song energetically and with a come-hither lilt the next. The last time I saw her, opening for Cass McCombs at Lee’s Palace in December 2013, she played her songs at a breathless velocity with a bright ease, as though they had been pop songs all along, and the crowd responded in kind; awed, I found myself wondering what could be next. This month, with the release of her fourth album Pink City for Idée Fixe Records, Jennifer Castle, in her gentle way, has emerged as quite possibly this country’s most compelling singer-songwriter.

Castle bought an antique shop guitar at age 19, and despite failed attempts to learn the instrument previously, suddenly found the knack.[2] A regular performer at the Tranzac Club, Sneaky Dee’s and the Music Gallery, she eventually released two albums on Blue Fog Recordings under the name Castlemusic; 2008’s You Can’t Take Anyone, recorded when Castle lived on Toronto Island, bore a full-band sound and fair amount of twang. Castle also lent her voice to the Constantines’ Kensington Heights LP and the Fucked Up “Year of the Pig” single released that year.[3]

April 2011 saw the release of the Castlemusic LP on Chad van Gaalen’s Flemish Eye imprint – the first music released under Castle’s own name. Featuring a cryptic cover painting by Mira Dancy (“It’s an image so deep that no matter how much I think I know it I look again and realize I know nothing about it.” ), the album brought Castle considerable media attention (one reviewer likened her sound to “Dolly Parton through a haze of hash smoke, if only Nashville had more of a taste for minimalism and sonic experimentation”).[4]

Castle employs a reductionist approach to songwriting: “I’m always interested in the lowest common denominator of feeling, so I really try to edit almost everything I can out of my own personal songs… so what’s left has to be there… that’s usually how I know something is done… ‘cause nothing can be taken out without it falling apart.”[5]

By boiling away the specificity of time or place, the tracks on Castlemusic retain a certain universality, penetrating to what loneliness exists in the heart of the listener, not wrenching it for pathos, but simply acknowledging its existence. Even when she is singing directly to a lover, there is a sense of absence, and simple lines like “Honey / don’t be long with my drink” can prove quietly devastating. Fittingly, Castle’s piano and guitar playing is seldom showy or filigreed. Seeing her live in 2012, Castle seemed to take this minimalism to an extreme, trying out some new pieces (/improvising?) seemingly to test how few notes could be used, and how far apart they could be splayed and still be called a “song”. This might sound pretentious, but like a Piet Mondrian painting, the results were frequently stunning.

Castle recorded her followup throughout 2013, and throughout its 32 minutes, “Pink City” reveals bold invention, a stronger voice, and new depths to Castle’s sound. Virtually each of the ten tracks here is a jewel; among the highlights:

Piano ballad “Working for the Man”, with its achingly lush string arrangements (courtesy of Owen Pallett with the Czech FILMharmonic Orchestra), almost sounds like it could be the distaff counterpart to Neil Young’s “A Man Needs a Maid”, filtered through Gordon Lightfoot’s more introspective moments.

Third track “Sparta” provides a necessary respite from the heaviness of the earlier track, although the minor-key chorus and ever-descending MC Escher flute outro contrasts with the song’s easygoing country backing, and what seems at first to be a simple “let’s head to the country” vibe begins to feel like maybe a tale of a transient couple heading to the next refuge until welcomes are overstayed: “…summer got old again / fall is a fair weather friend / winter show her face again / and look out look out look out / a cold wind is blowing in / let’s go”.

The opening trio of tracks, great as they are, are merely preface to “Nature”, a slow piano haiku which eerily invokes the late, great Kate McGarrigle (Ms. Castle: expect a collab request from Rufus Wainwright’s people shortly), and points to the sheer indifference of the titular force, which “happens to you even when you are ill”. Curious phrasings prove maximally evocative: “out on the highway / it rises the eye / I saw an eagle / full mouth with the kill flying by”. A Lennonesque bridge (“no family / no universe / no holy god / no mother earth”) leads to a final verse that sucks the breath out of you: “out on the land to either side / a pit as deep as it is wide / and underneath a rolling dime / I lift my skirt for the economy”. 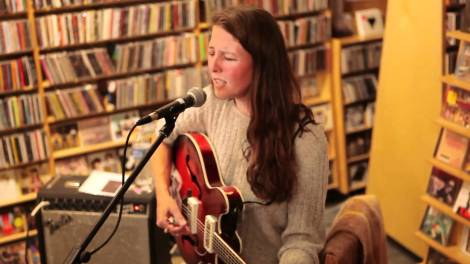 “Sailing Away” is, in no particular order: a proud declaration of independence and self-reliance, the track most likely to invite comparisons to Joni Mitchell (circa Blue, natch), a song which Castle has proven she can crush live with just her guitar, and a heartbreaker for any poor fucker who thinks they can win her heart. The strings accompanying her here push right to the edge of too much loveliness.

“Broken Vase” describes the ephemerality of time, and how the slow toll it takes and imperfections it makes in us are the true source of beauty: in the chorus, Castle describes a painter of flowers, singing every iteration of the phrase “a broken vase” in an entirely different way, and in so doing, giving her subject a cubist treatment of her own.

It’s well established that Canada has produced its fair share of observant, introspective singer/songwriters over the decades. Through perseverance, experimentation, and pursuance of her muse, Jennifer Castle finds herself at the gates of this pantheon, a rare Artist in an age of commerce and compromise.

Check out Jennifer Castle at the Great Hall on September 25, 2014.

[1] Castle released a split 7” with Wyrd Visions on Blue Fog Recordings in early 2011.

[2] “It’s funny, you can’t do it until you can. Like that Simpsons episode where Bart is an exchange student in France, and all of a sudden he starts speaking fluently.” – From Toro Magazine.

[3] Fucked Up were early champions of Castle, covering her song “For My Friends” on the same single; Castle also sang the part of Vivian in the band’s 2011 rock opera David Comes To Life.

[4] Castle has made no bones about her love of the weed, including a couple of buds and a pack of Zig-Zags in a “shrine of totemic objects that played a part in the album’s creation” for Weird Canada. Her father was a Jamaican immigrant, and she spent time there in early 2011. New album track “Sparta”, an upbeat twangy jaunt about, escaping to the country, includes the line “We were smoking / something on them / sort of reliant on it…”)