It’s April 9, 2014, and I’m at Toronto’s Phoenix Concert Hall for a Hold Steady show—the second I’ve attended this year, and the twelfth in total. On stage, Craig Finn is introducing the band’s next song. “So—” he starts out. From just the one word, I correctly identify the band’s next song. I’ve seen them enough times—and in enough places—to know their shtick by now.

I’ve done a lot of amazing things when it comes to the Hold Steady: I’ve crossed time zones and borders multiple times by plane, bus and automobile just to see them play. I think I used a song lyric as the title for a graduate-level essay. I definitely went to Minneapolis to explore the band’s references and eat lunch in Loring (Penetration) Park.

You could say I’m a fan.

When I found out that the band would be playing in Toronto four nights in a row, there wasn’t any question whether I’d attend every night. No, the question was, ‘how on earth will a band with only four[1] solid albums under its belt pull off original and engaging shows four nights in a row?’

Oh, me of little faith. The Hold Steady are known for putting on exuberant, high-energy shows that keeps fans coming back—upwards of sixty times, in some cases. Combined with the perfect bar venue, the shows couldn’t not be amazing.

For the uninitiated: The Legendary Horseshoe Tavern is a venue whose history actually outshines its own self-aggrandizing name. In its many permutations, artists from Loretta Lynn to The Talking Heads, Tom Waits, Stompin’ Tom Connors, Etta James, and—infamously—The Rolling Stones have all played the venue. It has been a staple in the Toronto music scene for 67 years and has been instrumental in promoting Canadian artists. Every December, an act takes up a short residency for four or five nights in a row to celebrate the venue’s birthday. Without fail, these shows are loud and rowdy. Performers always go the extra mile, and the crowd is guaranteed a great party. In short, the Horseshoe’s birthday and The Hold Steady were made for each other. December 10th could not come fast enough for me.

That Wednesday didn’t kill me, but it did nearly give me an aneurysm. Brazen and boastful from previous successes at ‘calling’ songs and set lists, I predicted two—and only two—possibilities for the first song: The Hold Steady has a strong sense of theatrics, I argued; they of course would begin with a literal “Positive Jam,” or at the very least the crowd-pleasing natural opener “Hornets! Hornets!”

Imagine my shame—imagine the pain, the betrayal!—when they broke into “I Hope This Whole Thing Didn’t Frighten You,” a lacklustre-at-best song off of their most recent, equally lacklustre album. This was followed by another song off Teeth Dreams. Tears welled up. And then a third song- Teeth Dreams again. I headed for the bar as despair set in. A fourth. “The Hold Steady is dead,” I declared despondently. “Long live the Hold Steady.” Then came two more.

I’d never been happier to hear “The Weekenders”, off Heaven Is Whenever, which came seventh.

The betrayal was so severe for precisely the same reason that a four-night stint was supposed to be so great: The Hold Steady knows and plays to its audience; the band is beyond engaging and creates set lists that make a crowd lose its collective shit right from the start. But none of us had any shits to give by song three. Nor did song eight, a popular one, redeem the band in many peoples’ minds.

But then, as other sites might say, something incredible happened. 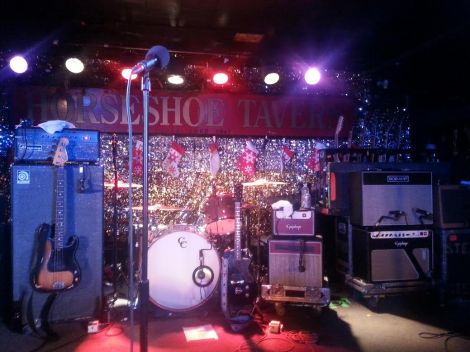 The Hold Steady’ home for four nights in a row.

Without warning, the band launched into a start-to-finish performance of its first, widely popular album, Almost Killed Me, followed by a rowdy, singalong-heavy encore. Fans—including yours truly—left elated and entirely forgiving of cruel jokes played on them earlier that evening.

The stage was set for the next three nights: everything was fair game, and there were three more very good albums left to hear.

Thursday night didn’t disappoint. Following a similar formula to Wednesday’s, the band subjected an eager crowd to five songs from Teeth Dreams and then played all of Separation Sunday, the band’s second album, which is generally considered its best. On Friday, they played all of Boys and Girls in America—the biggest crowd-pleaser, by far.

With the three nights building to the finale, and only a more expansive, experimental, and at times subdued album left, fans wondered how the band would be able to top the previous nights.

Pretty easily, actually: as Craig Finn announced when the band took the stage, they were going to do whatever the hell they wanted. Everyone was ready for a night that blew others out of the water. Band members sported Santa Claus hats; the audience pressed closer to the stage; beer flowed freely for all. Saturday’s set featured some Stay Positive songs and fast-paced, fist-pumping hits from the band’s first three albums. The show ended with Finn pulling long-time fans up on stage, who were soon joined by as many people as could fit up there. It was, in short, a massive night, and it had been preceded by three others, none of which I’ll ever forget.

The Hold Steady has a stage presence that tends to recruit the person you’ve dragged along as an actual fan, as happened to me. I think they are one of the finest touring bands out there. I’m clearly biased. Nevertheless, writing a review of what Rolling Stone has called “America’s greatest bar band” playing at Toronto’s best bar venue is almost redundant: save for about 30 minutes on Wednesday night, no one had any doubts that The Hold Steady would show the Horseshoe an amazing birthday. And they didn’t disappoint. It was the kind of run that makes you consider whether you should see any more shows, lest new experiences ruin your memories of of previous ones.[2]

More than anything, though, The Hold Steady’s four-night stint emphasized the band’s acute awareness of its own history, mythology, and appeal. Four nights saw only two songs from Heaven is Whenever, the band’s much-maligned attempt to redefine their sound in the post–Franz Nicolay era. This imbalance isn’t new. Since Teeth Dreams was released, Heaven’s songs have lost airtime during shows, more often than not replaced by songs off of Boys and Girls.

Not a crowd in the world would complain, and The Hold Steady knows this. Hell, the band even cushions Teeth Dreams songs in between earlier hits. Notably absent on hit-night-Saturday were any songs whatsoever off of that album; it was hard not to think of them having been suffered through before the payoff of “the good albums” Wednesday through Friday.

By relying on their first four albums for their success at the Horseshoe, the band made the right decision: they played to the crowd, and the crowd loved it. But by doing so, they also shied away from the fact that, critically speaking, the band isn’t doing so well right now. Its last two albums have been poorly received attempts to break out of bars or midsized venues and into the mainstream. They’re trying to move beyond everything that they’re known for, all the while playing to the appeal of their own mythology.

Relying on previous successes is a double-edged sword, and it’s a vaguely disconcerting one to me. On the one hand, you’d have to be an idiot not to declare all four nights at the Horseshoe wildly successful. Fans and drag-alongs alike were thoroughly entertained. On the other hand, it means that the band’s recent reception may not make them change their trajectory towards the more basic, guitar-riff heavy music we’ve heard of late.

I look uncomfortably towards the musical future we may inherit. But in the meantime, I remain so, so glad to see The Hold Steady are still in the bars.

[1] Like any good fan, I prefer not to acknowledge albums five and six (Heaven is Whenever and Teeth Dreams, respectively) if I can help it.