We wait for it all year, friends. That magical time, every winter, when titans suit up and square off in bouts that will test their mental and physical fortitude. When it’s over, the defeated leave empty handed, but the victorious will snatch glory from the hungry maw of adversity, etching their names in the annals of history.

It’s WrestleMania season. You were expecting something else?

While WrestleMania is the climax of World Wrestling Entertainment’s narrative year, the build for it starts in earnest with this Sunday’s Royal Rumble, where 30 entrants battle in an over-the-top battle royale to earn a title match at the big show. By giving the winner of the Rumble a title shot, the emotional peak of the biggest show of the year gets locked in three months ahead of time, giving them a rare opportunity to really build up the stakes in a business that typically goes four weeks or less between major cards.

Before I really dig into this weekend’s event, I feel it’s important to explain what I get out of pro wrestling, as a guy who rarely (if ever) watches competitive sports. 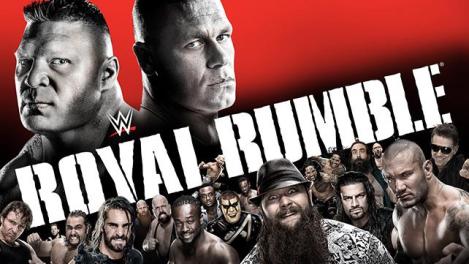 Lesnar. Cena. And a colourful cast of characters.

The New Day vs. Cesaro, Tyson Kidd and Adam Rose

Pre-show matches are always such strange animals, because they’re typically no-stakes filler, which is basically what we have here. Despite liking all of the participants in this match, I find it hard to get excited for it.

The New Day continues to confuse me as a concept: after suggesting Kofi Kingston, Xavier Woods and Big E Langston were forming a stable to ensure and demand better opportunities for themselves, they instead returned as gospel-tinged babyfaces two-stepping and playing to the crowd. Adding to my confusion is the aligning of Cesaro and Tyson Kidd with Adam Rose. Cesaro and Kidd were starting to build momentum and chemistry despite being tossed together seemingly at random. Putting them with Rose is probably an attempt to try and salvage what’s left his character, another promising NXT gimmick that didn’t quite stick the landing when moved to the big stage. I suspect this will be a fun match, with some memorable spots, but I don’t see what it’s supposed to do for any of the participants. As much as I think Cesaro, Kidd and Rose have the better upside (well, Cesaro and Kidd anyway), I think The New Day needs the win more if they’re going to have any hope of being taken seriously. 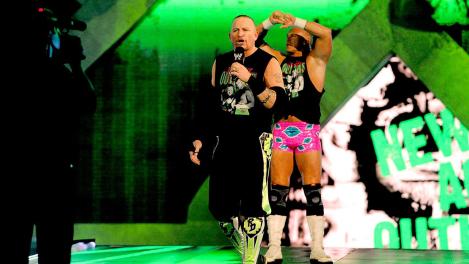 The New Age Outlaws vs. The Ascension

Yes, you’re reading that correctly, The Road Dogg and Bad Ass Billy Gunn are still sporadically dusting off the boots when needed, this time to try and get a little heat back on The Ascension, who have lost a little of what made them interesting when they were in the WWE’s farm league, NXT.

In the transition to the major leagues, The Ascension have been constantly comparing themselves to past superstar tag teams, most notably The Road Warriors and Demolition, which is not a move I’m a fan of, but is probably necessary if you’re going to wear large shoulder pads and face paint. After getting laid out by a gang of senior citizens on last Monday’s RAW, there’s no way Konnor and Viktor don’t score a win here to re-establish themselves as respectable heels. Whether beating down two semi-retired (though beloved) part timers does them any favours in the eyes of fans will remain to be seen.

Paige and Natalya vs. The Bella Twins

What a strange beast the Divas Division has become. Once little more than cheap T&A or bathroom break matches, the success of the Total Divas show on the E! Network has lead the WWE to invest in the women more seriously than they have in years, with most matches stemming from or enhancing plots on the show and vice versa. While she’s been amusing to watch with Nattie on the show, as a character I like Paige as a lone wolf, though you could argue she’s had so many face/heel turns in the last year it would have no impact if she laid her out. If Natalya’s husband Tyson Kidd shows up with them, they could pull the trigger on his character’s doucheyness from subtle to overt, costing them the match and having Nattie turn on him, instead of Paige on her. At any rate, the Bellas have been taking a fair share of losses lately, and with Nikki holding the belt, I see them getting the win, though not cleanly.

The Usos vs. The Miz and Damien Mizdow

Round 6,489 in a feud that’s been going since I believe the 1930’s. Look, we don’t need to talk about the ongoing disregard for the Tag Team division, it’s clear the focus will always be on singles competitors. I don’t think this match will serve any point aside from fomenting dissent between if not outright splitting The Miz and Mizdow, to try and reset the latter. Mizdow’s work as impressionist and comedy worker has endeared him to the fans, and while I’m not exactly sure where he can go without someone to bounce off of, he’s earned his shot to try a solo run. And Lord knows what happens to the Usos if they don’t hang onto the belts.

Despite having 30 participants, the Rumble usually only comes down to two people: the guy who goes the longest, and the guy who wins it. This year is interesting because you could make the argument that there are too many “obvious” choices for who gets the title shot. Do you give it to Daniel Bryan and try to recapture the lightning in a bottle that was his 2014 road to WrestleMania?  Do you give it to Dean Ambrose who, should Seth Rollins pull out a win, could have a great match against his former Shield-mate that brings an elevated sense of closure that they never achieved in their original matches? Or do you give it to Roman Reigns, who Vince clearly has high designs for, and run the risk of the fans turning on him before he even gets going?

Oh, Roman Reigns. So imposing, so powerful, so intimidating. And then they let him talk. My biggest concern with Reigns isn’t his mic work (which is subpar, but you can only do so much with what the writers[iii] are giving him) but the fact that unlike other members of The Shield, his character hasn’t evolved. Rollins became the snivelling sellout who turned on his teammates in a bid for solo success; Ambrose is positioning himself as this generation’s Brian Pillman; Reigns is using the same entrance, wearing the same vest, using the same “meh” move set.[iv] I do believe that he has tremendous potential, and can be a monster star for the company, but not as he is now. Every combination of “final four” combatants I can think of, if Reigns comes out on top it’s going to be “Bootista” all over again. Can you imagine if comes down to Reigns eliminating someone like Bryan or Ziggler in the final moments of the match?  The end of the Royal Rumble can light a powder keg of excitement for the next three months, or it can kill the main event of the biggest show of the year. I see your final four as Ziggler, Bryan, Rusev[v] and Reigns, but after that I really have no idea where they might take it.

But now that I’ve written it out, that Ambrose idea actually excites me the most… 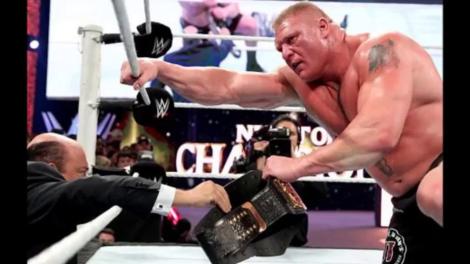 Will Brock Lesnar hang onto the title this time?

Of course the underlying fear is that Vince decides to play it safe going into ‘Mania, putting the belt back on Cena, possibly after Sting interferes (setting up his certain match with HHH), even though no one needs that title less than John Cena.

The title picture in the WWE has been an interesting one the last year, in the sense that it hasn’t really existed. With Brock on a part-time schedule, the focus of the show week to week has been on the ongoing struggle against The Authority. But with Lesnar reportedly on his way out after his current contract expires, the title is set to return as a major element of storylines. It took me a long time as a wrestling fan to realize that titles work to elevate the person holding them, and after a certain point, some people don’t need them anymore.[vi] Lesnar and Cena don’t need to be champ; they can spin off into separate grudge matches (just, please, not against each other). Which leaves the only person who “needs” the title: Seth Rollins.

In an era of “smart” fans who love to start disruptive chants that have nothing to do with what’s going on in the ring, Rollins is surprisingly over as a kayfabe heel. Compare the chants someone like AJ Lee always gets for her real-life husband CM Punk with the “You sold out!” chants lobbed at Rollins. He didn’t sell out, his character did, and it’s a testament to his work that fans are so invested in hating him. He’s got his stooges in Jamie Noble and Joey Mercury (and how great is it to see them with on-camera roles?), he gives suitably arrogant promos and the Curbstomp is one of the best chickenshit finishers I’ve ever seen. The one problem is he’s in a title match with two guys who are each actually twice the size of him. If they do put the belt on him, it has to be done in a way that makes him seem credible. His Curbstomp to Lesnar on RAW a couple weeks ago was a good start, but I don’t want to see him be a non-factor for most of the title match, only to cash in his Money in the Bank contact once the match is over on a fatigued Cena or Lesnar.[vii] Even though I fully expect that to happen once Sting helps Cena win.

And even if it does, it still gives the WWE three months to keep building Rollins into the vilest of heels, the face of the hated Authority, a guy begging to have his teeth knocked down his throat and losing his title on the grandest stage of them all.

The question will be whether any of the current crop of babyfaces deserve to take it from him?

[i] I once heard Chris Jericho liken it to jazz, where all the musicians know what song they’re playing, but once they’re onstage, they’re free to improvise as they go. I love that.

[ii] And yes, Internet Wrestling Community, I do believe there is actual thought put into every outcome.

[iv] I’m fine with the Superman punch, though I wish there were a setup move brought into it that dizzied his opponent. But why does every “dominant” wrestler just use a spear?  I AM OVER THE SPEAR, WWE.

[v] I see Ziggler getting the consolation prize once again of being the “story” of the match, lasting the longest and enduring the harshest beatings only to lose it at the end. I also expect Rusev to have the sort of showing that takes him up a couple notches as an unstoppable tank.

[vi] If it were up to me, Chris Jericho and The Undertaker would have held every belt between 1995-2007.

[vii] Which can join The Spear as a move I am done with.

Jordan Ferguson refuses to refer to anything as “The WWE Universe.” He performs the five-knuckle shuffle at poetryforgravediggers.com.

One response to “Questions of Regality: On WWE’s Royal Rumble”