The 2015 Lakers are objectively bad at the sport of basketball. Lately, Byron Scott has been trotting out a starting lineup of Ryan Kelly, Tarik Black, Wayne Ellington, Jordan Clarkson and the immortal Robert Sacre. When Kobe Bryant tore apart his shoulder earlier this season, many gasped that this could be his end, while others were relieved—Kobe has been miserable all year, and someone as great as him really shouldn’t be forced to play with this putrid bunch. Ideally, the Lakers will reacquire their pick from Phoenix, secure some free agent talent and allow Kobe to end his career with dignity.

More than anything, Kobe’s injury has afforded us the luxury of time—Time to reflect on a storied career and its inevitable end. Kobe Bryant will probably not play pro basketball again until later this year, and in 2016, he will write his final chapter in the league’s history books. We hope that his career will end with dignity, but given the state of the Lakers, we cannot be so sure.

I remember watching Dikembe Mutombo’s final game with the Houston Rockets in 2009. It was that year’s playoffs and Mutombo found himself in a situation he’d been in hundreds of times. The Rockets’ opposing guard had launched an errant floater towards the rim, and Mutombo found himself at positional odds with a lumbering opposing center. On this night, his defensive counter Greg Oden won out, secured the offensive board and hammered home the put-back. Halfway through the play, Mutombo had crumpled to the ground, leaving Oden’s dunk completely uncontested. Inexplicably, yet thankfully, a foul was called against Mutombo, halting play. In 2009, Oden was 21 years old, exactly half Mutombo’s (alleged) age, but was every bit as large as the legendary center. Mutombo writhed in pain beneath the basket; in nearly the same spot he had triumphantly clutched the ball in his Nuggets’ glorious upset of the Sonics in the 1994 playoffs. 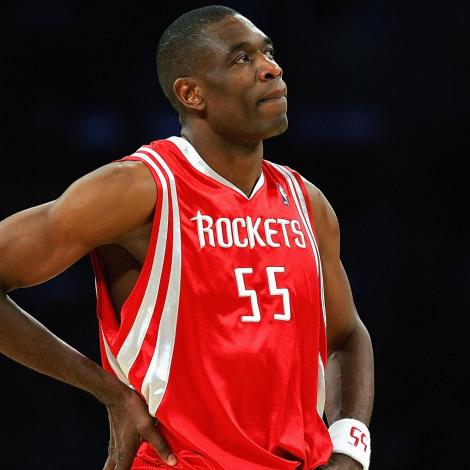 We watched Mutombo play until suddenly, he was gone.

It all happened so fast. Within minutes, Mutombo was removed from the court on a stretcher while commentators lamented Mutombo’s brilliant career. Portland’s opposing home crowd gave Mutombo a standing ovation, while teammate Yao Ming’s head hung in disbelief. We knew Mutombo wasn’t getting any younger, but we were also not prepared for an exit like this. Before I’d even begun to process what was happening, the stretcher entered the tunnel, and Dikembe Mutombo’s career was effectively over. It was admirable that Mutombo went down battling, but disappointing that he couldn’t complete throughout the playoffs. He was as dignified a pro as there ever was, and he deserved to walk off the court on his own terms, not be carried away from it.

When this 2015 NBA campaign comes to a close, Kevin Garnett will have played roughly 1,600 total games (regular season and playoffs) leading Kobe Bryant by nearly 100 games. Garnett is currently in basketball purgatory, lending his talents to a thoroughly mediocre Brooklyn Nets team. The Nets are saddled with a batch of horrendous long-term contracts, possess very few upcoming draft picks, and are coached by an anti-analytics curmudgeon who loathes playing rookies big minutes. At age 38, Garnett is also in the last year of his contract.

Garnett refuses to discuss retirement, or the possibility of a buyout that could reunite him with coach Doc Rivers in Los Angeles later this year. Instead, Garnett may spend his final year as a pro playing a paltry 20 minutes per contest for a borderline Eastern Conference playoff team. Though his minutes are down, Garnett still plays with unusually high intensity, barking at opponents and thumping his chest throughout. But given Brooklyn’s otherwise listless play, what was once “Anything is Possible” now seems tired and destined to toil in irrelevance. Sure, his trash talk is probably as sharp as ever, but is anybody listening anymore?

The Nets, even at their most effective, play an unusually detached brand of basketball. Other than the happy-go-lucky Brook Lopez, each player is joylessly locked into a style that seems to benefit their personal interests rather than that of their team’s. Joe Johnson makes ridiculous isolated jump shots, while Deron Williams remains positively lethal with the ball in his hands, but borderline useless without. Despite his reputation as a great teammate, Garnett looks out of touch with this group. In the rare moments that the offence flows well enough to involve Garnett, his old legs usually fail to lift, and his jump shot looks rougher than ever.

I attended the most recent Nets/Raptors game. On this night, Garnett logged 12 minutes, shot 3-for-6 from the field and finished with seven points and four rebounds. The Nets capitalized on a poor showing from the Raptors and decimated the Toronto defence with phenomenal shooting from former Raptors Jarrett Jack and Alan Anderson. When the game began, the thought crossed my mind that this could be the last time I’d ever see Garnett play live. I reflected on that possibility with mixed emotions—happy that I had the opportunity, but disappointed he was retiring in an irrelevant role with the lowly Nets. Then, at the start of the third quarter, Joe Johnson found Garnett open for a mid-range jumper in my immediate vantage point. As KG rose up for the open look, a fan seated three rows from the court stood up and began yelling at him. Garnett calmly sank the J, turned around, pointed at the fan and yelled sharply enough that the fan quickly, and sheepishly sat back down. For a moment, I felt foolish. Sure, he’s not the phenom Timberwolf anymore, nor is he the champion Celtic, but even if only one person is listening, Garnett will trash talk his way to the end, playing the ever-intense brand of ball that he’s played all his life.

4 responses to “Anything is Possible, Except Defeating Father Time”