It feels as though we’ve crossed into some new Oscar era – the period of the split vote. I don’t know if it’s the re-working of how Best Picture is awarded, or the increased awareness of the politics involved, but somewhere along the line the show has become increasingly binary. Last year, Oscar sentiment was split between Gravity and 12 Years a Slave. This year it’s a question of Birdman or Boyhood. You’d have to go back to probably 2003 and The Lord of the Rings‘ huge sweep to see the last dominant film performance. Times have changed.

Of course, this one-or-the-other feel has permeated the entire broadcast. True to form, the 87th annual Academy Awards felt balanced on a precipice of good and bad. On the one hand, there was time for, say, a silly gimmick joke that runs throughout the entire length of the show. On the other, it felt like a predominant number of the thank you speeches were given over to causes, messages and platforms. (Not that there’s anything wrong with that.) There were touching moments and bizarre screw-ups. John Travolta being creepy and Julie Andrews being gracious. The Oscars, from the nominees to the winners to the character of the show itself, have become for better or worse a  yes-or-no referendum on film, culture and good taste.

In that spirit, let’s play a game I like to call “Highlight! Lowlight”. I’ll come up with one highlight from the Oscars’ broadcast, and then immediately toss a corresponding bucket of cold water on it. Sound fun? Binary Oscars, baby.

“We who are about to die, salute you!”

Highlight! The opening joke where our host Neil Patrick Harris mentions that this is Hollywood’s “whitest night” felt encouragingly risqué. Coupled with the gonzo appearance by Jack Black in the opening musical number, the show writers were clearly not afraid to poke fun at two of the Academy’s (and Hollywood’s) biggest elephants in the room: the perceived overall whiteness of the people in charge, and the film industry being slowly turned into a comic book adaptation churning machine.

Lowlight: That’s just about as good as NPH got on the night. After Black reminded him this wasn’t the Tonys, Harris looked like an overwhelmed understudy grasping at every straw he could. Bad jokes about spoons with Reese Witherspoon, British accents with David Oyelowo, an appearance in his underwear, and more were to follow. The only thing missing was the flop sweat. And whoever was responsible for the running gag regarding the bag of NPH’s Oscar “picks” should be fired. Octavia Spencer will make it happen.

Highlight! Ida wins best Foreign Film. Really liked this one. Then director Pawel Pawlikowski hit the stage, thanked everyone he knew, ploughed through the play-off music, kept going, and was about to be tackled off the stage before he finally said good night. Cheers to maximizing your time up there Pawel! You probably won’t get another chance like that.

Lowlight: Unfortunately Pawlikowski’s speech set the tone. Once everyone figured out they could just keep talking, all bets were off.

Highlight! I’m a sucker for a good montage, but in the interests of time I’m fine with the removal of the random “let’s celebrate the movies” video packages.

Lowlight: That said, the montages we did get for the Best Picture nominees were truly bizarre. Who decided that American Sniper and The Grand Budapest Hotel should be grouped together? Why put Whiplash and Selma in the same package? I realize the number of nominees prevents giving each its own montage moment but we really need to thematically re-think this.

Highlight! Common and John Legend came out and killed it. Let’s go on the record here and say that this almost never happens during an Oscar broadcast. Their performance of “Glory” from Selma was a much deserved victory lap for a great song and a significant movie. Add in the great speech the two of them gave after their win and this was quite the moment.

Lowlight: Every other song performance. Quick: do you remember who sang any of the other nominated songs? (Hint: one was a FRIEND of Gwyneth Paltrow.) Like musical wallpaper, man. And this includes Lady Gaga’s inexplicable tribute to The Sound of Music. I will never, ever, ever, ever understand the Academy’s unexplainable pumping up of the musical. I was actively hoping Christopher Plummer would angrily stagger onto the stage to start kicking over the set.

Highlight! The amount of fucks given by Shirley MacLaine and Eddie Murphy: zero.

Lowlight: I spent too much time conducting a weird Sliding Doors-like experiment where Murphy ends up hosting the Oscars in 2012, as directed by his friend (and tastemaker) Brett Ratner. Does the entire universe realign if this happens? Are we living on Mars by 2015 in this Butterfly Effect scenario? This is what happens when you’re forced to watch NPH talk to seat fillers.

Highlight! Big twist in the In Memoriam segment: Mike Nichols gets the hammer! Really thought Robin Williams would get it. I suppose this isn’t a highlight, but I wanted to get this down somewhere. Other names included: James Garner, Lauren Bacall, Eli Wallach, James Rebhorn, Elizabeth Pena, Ruby Dee, Alain Resnais. It never gets less shocking to realize how many “name” actors/directors we lose in one year.

Lowlight: As people have been mentioning elsewhere, isn’t it a tad strange to not toss Joan Rivers into this segment? The entire red carpet brouhaha industry seems to have been conjured into relevance by her, right? Just one more slight in a career full of them.

Lowlight: All of these extraordinary people are reduced to a couple of seconds in a recap montage. But don’t worry, here comes NPH to talk about that locked briefcase some more!

Highlight! Idris Elba and Jessica Chastain out to present Best Cinematography. This is a lot to take in.

Lowlight: Roger Deakins (nominated for Unbroken, but still) is now 0-for-12 in this category. He totally trashed a hotel room last night.

Lowlight: A short while later, NPH: “Gone Girl‘s original title was “Bitches Be Trippin’, Yo”. So there’s that.

Highlight! All things considered, the little indie movie that could, Whiplash, managed to win three Oscars (for Sound Mixing, Editing and Supporting Actor). All three were very much deserved – for my money, I can’t think of a film whose editing was more intrinsic to the overall effect.

Lowlight: Is this a good time to talk about whatever Terrence Howard was doing when he was introducing the montage of clips for Whiplash, Selma and The Imitation Game? Either he is very passionate about jazz, or the teleprompter broke. Or, as some have suggested, he thought about all that Marvel money he had given away. 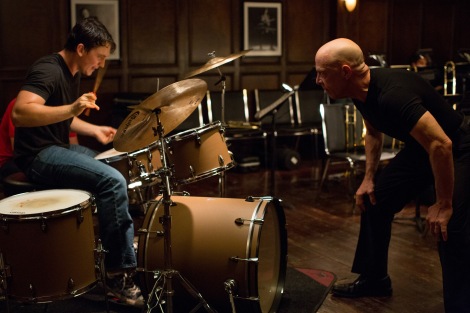 “Was your performance rushing or dragging? Answer me!”

Highlight! Other pleasantly deserving wins: Interstellar‘s awesome visual effects, Grand Budapest Hotel as the movie that wins all the production design awards, and sure, why not, congrats to Julianne Moore for finally winning an Oscar. (Even if I don’t know anyone who actually saw or recommends Still Alice.)

Lowlight: The Imitation Game wins Best Adapted Screenplay over Damien Chazelle for Whiplash? Leaving aside the ridiculous idea that Whiplash is an “adapted” screenplay (it was adapted from the short film that Chazelle wrote called, get this, Whiplash), just what is so special about The Imitation Game? Graham Moore’s speech here was very touching, but one wonders what it has to do with the staid, by-the-numbers WW2 film he wrote. How is he “staying weird”?

Highlight! Not sure exactly when this changed but I enjoy the fact that the Science and Technical Awards are now presented by an attractive actress (as is tradition; this year, Margo Robbie) and an actor (a game Miles Teller). Gone are the days of the uncomfortable montage of nerds getting handed a statue solely by a woman they are too nervous to look in the eye.

Lowlight:  Is this progress? I can’t tell.

Highlight! Definite progress: Idina Manzel gets some zingers in on John Travolta after he tagged her with that stupid “Adele Dazeem” meme.

Lowlight: John Travolta (and his insane wig) are involved.

Highlight! Now, a serious congratulations to Alejandro Gonzalaz Inarritu. He won for Best Original Screenplay (with others), Best Director and ultimately, Best Picture. Going all the way back to Amores Perros, Inarritu has been working hard for his movies. For all the back talk we give mainstream filmmaking these days, there are still people out there making the films they want to make, and doing it with passion.

Lowlight: Inarritu inadvertently steering the Birdman Backlash ship right into an iceberg. “Our work will, as always, be judged by time.” Hundreds of bloggers sharpen their knives.

Highlight! Michael Keaton getting up on the stage during Birdman‘s win for Best Picture. Look, Keaton is a goddamn national treasure. I’m not sure where exactly his career went wrong, or how much he actually cares it’s turned out the way it did, but his performance in Birdman deserved a little more than it got. It was cool just to see him around.

Lowlight: The clip they showed of Eddie Redmaybe as Stephen Hawking was nice and all, but all I could think of as his voice wheezed out was that same voice in quite a different movie. Best Actor, Eddie Redmayne.

Cynicism aside: It was cool that Birdman won.

Highlight! Whether you were in for Birdman or Boyhood winning Best Picture, let’s try to keep perspective here: both films were original, unique, technically amazing and filled with a real passion that was hard to ignore. Cases could be made for both winning or losing, but let’s just be happy they both were celebrated in some way. And let’s be thankful that poor Richard Linklater is so chill.

Did the good outweigh the bad? Did you question the meaning of your existence more often then enjoy specific moments of the show? Did your favourite movie win or lose? This is the era of the binary choice Oscars. Here are the rest of your winners. Enjoy.

Now I’m off to collapse in a heap. Need to get up bright and early tomorrow for the Viking funeral of NPH’s career.

One response to “Academy Awards Recap 2015: The Oscars’ Highs and Lows”