This week is the March Break for schools around Ontario. So to celebrate, I’ve been mostly sitting in a recliner with a box of Triscuits in one hand and a craft beer in the other since Friday afternoon around 5:15.

Tuesday was Saint Patrick’s Day, so the only movement I accomplished was to move to a bar and drink more beer (no Triscuits in sight, though, sadly). There was also a Champions League game on, and I seem to recall in my foggy state, a college basketball game between the Manhattan Jaspers and the Hampton Pirates.

The Pirates won the game, and in doing so, the right to play against the undefeated, heavily favoured, University of Kentucky Wildcats in the first round of the NCAA basketball tournament, also known as March Madness.

The biggest story in college sports has been Kentucky’s undefeated season. The Wildcats would only be the eighth team to achieve that feat, and the first since the Indiana Hoosiers in 1976.

This year’s Kentucky Wildcats team features two dominant 7-foot post players in junior Willie Cauley-Stein and freshman Karl-Anthony Towns, as well as twin brothers Aaron and Andrew Harrison in the backcourt. They share the scoring load, and any of the starting five, including forward Devin Booker, can fill it up at any time. Scouts project as many as nine players on the roster to make the NBA, so this could be one of the greatest NCAA men’s basketball teams ever. Coached by John Calipari, who won an NCAA championship with Kentucky in 2012 (and, ahem, two others that were later vacated), the Wildcats are heavy favourites to win the whole tournament.

That being said, there is an obvious first question. 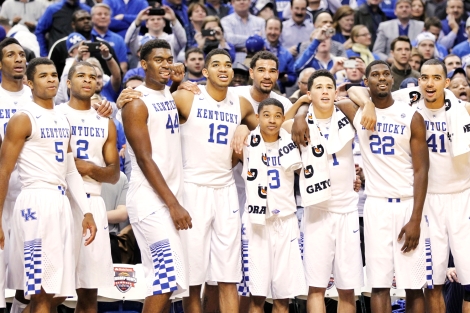 The faces of an undefeated team.

WHO CAN STOP KENTUCKY?

In my bracket, Kentucky’s path goes through Hampton with a 30-point victory. Next up for them is Purdue, who feature two 7-footers of their own, in A.J. Hammons and Isaac Haas. Hammons is projected to be a lottery pick in the upcoming NBA draft, so he and freshman Haas should be able to disrupt Kentucky pick-and-rolls and post plays. This could either be an early challenge for the Wildcats, awakening them to play at their top gear for the remainder of the tournament. Or, it can be one of those games where Kentucky dominates, again, and talk returns to the undefeated season. Whether Kentucky wins or loses against Purdue will have to do with the accuracy of their perimeter shooting.

I’m probably in the vast minority when I predict Kentucky’s next matchup will be against mid-major Valparaiso. The Crusaders play tough defense and feature Alex Peters, a 6-9 sophomore forward who shoots 46 percent from beyond the arc. Their talent level, one through five, is not up to par with Kentucky, but a hot 3-point shooter can swing a game.

The Elite Eight sees Kentucky meet with #2 seed Kansas. This will be a massive game, and Kansas is talented enough to challenge the Wildcats all over the floor. Senior forward Perry Ellis will miss the first-round matchup, but should be healthy enough to return for the later rounds.

Once the tournament enters the Final Four, the talent levels are more comparable. While Kentucky remains the favourite, and is my choice to win, it would not shock me to see them lose to a team like Arizona, Wisconsin, or Duke. So, to answer the title question, Purdue might be able to shock them early, and from the Elite Eight onwards, teams can stop them, though without injury or a major heat check from a top player, it looks unlikely.

Is Jahlil Okafor going to be the #1 pick in the draft?

WHO WILL BE DRAFTED?

Duke features two players who project to be top-10 picks in the upcoming NBA draft in June. One of them is freshman centre Jahlil Okafor, who may be the first overall pick. Okafor is averaging 17.7 points and 9.0 rebounds, while shooting 67 percent from the field. He is 6-11 right now, but may still grow to reach over 7 feet by the time he plays an NBA game. Duke does not meet Kentucky, if at all, until the National Championship game, and if they do, Okafor will need to have a monstrous night to steal the title away from Kentucky.

The other Blue Devil star to watch is freshman forward Justise Winslow, who is a 40 percent 3-point shooter and defensive leader. Winslow would still need time to develop his game, and would be well advised to stay another year in college. If he jumps to the NBA, he will take time to find his legs, but could end up looking like a Kawhi Leonard in the best-case scenario.

Kentucky’s twin towers of Towns and Cauley-Stein also both project in the top 10, and could be franchise-altering big men for the right teams.

Young guards are always exciting to watch, but this year’s tournament is a little bereft. Ohio State freshman D’Angelo Russell is the best of the bunch, averaging 19.3 points 5.6 rebounds and 5.1 assists per game. Russell will definitely be the first NCAA guard off the board in June, and depending on the placement of Chinese League’s Emmanuel Mudiay, the first guard overall.

Arizona’s Stanley Johnson will also have many scouts in attendance, as a reliable and efficient scorer and dependable rebounder. Another freshman, Johnson will likely be taken inside the top five on draft night.

ANY DARK HORSE TEAMS TO WATCH?

Always. In the South, I like 11-seed UCLA to push the pace past academically-suspicious Southern Methodist. A second-round matchup between the Bruins and Iowa State could be the highest-scoring, and most entertaining, of the tournament. If UCLA squeaks past that, they’re looking at a third-round match with Gonzaga, an impressive regular-season team that usually disappoints in tournament play. If everything bounces right, UCLA could make the Elite Eight before finally bowing out to a much better Duke team.

In the Midwest, 13-seed Valparaiso could also make life tough for teams with higher seeds. They are tough defensively and feature a lights out shooter in Peters, who can change games with just two or three jump shots. Their path also has them playing a hobbled West Virginia in round 2, but then Kentucky in round 3. A Sweet Sixteen exit could be considered a significant run. No shame in losing to the best.

WHY SHOULD WE CARE ABOUT MARCH MADNESS?

Look, I get it. John Oliver did a great job, though he was far from the first, describing the ridiculousness of financial disparities between millionaire coaches, billions of dollars in revenues to schools, and players eating Ramen noodles in shared dorms. I believe NCAA schools should share the wealth with their players. No one is talking about million-dollar contracts like the pro leagues, but student-athletes could easily receive a small percentage of their schools’ income, even if it came in the form of helping their families pay bills if needed, or gift cards for grocery stores so we don’t have any more revelations like this.

I would also like to see the NBA institute a rule similar to the NFL, whereby players must be at least three years removed from high school before being drafted. Some would choose, like Mudiay and others before him, to jump to Europe or China to collect paycheques rather than attend college. I would like to think that most top-tier basketball players would stay, and March Madness is one big reason why they would. The tournament has a place in the North American subconscious (just look at how many offices are posting their brackets this week) and most players would like the sound of “NCAA Champion” on their resume. Staying for three years could also mean more degrees will be handed out, as players would likely take summer courses while working with their teams in the offseason.

So why watch March Madness? If you’re a basketball nerd, you’ll watch because you want to see who’s up-and-coming through the ranks. Maybe you want to see coaching strategies as they relate to players not as talented as LeBron James or Russell Westbrook. Maybe you want to see arenas full of fans who actually care about the result, and have the energy to chant, shout, and jump for 40 minutes. Of course, stories like Calipari’s, or Steve Kerr’s experiences as a collegiate player, or the recent Oklahoma State University fraternity video scandal, make it hard to stomach supporting collegiate athletics sometimes. Just remember it’s not all negative.

This year, Kentucky could become an historic team, and 63 other teams are going to fight to stop that from happening. The NCAA is not perfect, but neither are the World Cup, the Olympics, or any of the pro sports leagues. Starting on Thursday, I know where I’ll be: my couch, craft beer and Triscuits nearby, cheering like hell for my bracket to come true.