Welcome to the final stretch of the Mad Men Monday Recap. A show as deep as this one needs some diverse commentary so jump in and enjoy our irreverent breakdown of each episode.

It is worth taking a minute to discuss what happened in each episode. If you’re looking for some straight talk on what we just saw on Mad Men, read this section (and then read the other sections because, why not).

With a flourish, we get the Mad Men trifecta all in an opening sequence – beautiful woman, Don’s voice and a suggestive song. Is that all there is? Of course not. With Mad Men back for one final run of episodes, I’m sure there will be plenty to unpack. Let’s enjoy it while we’re here (or before we’re dead).

Things appear to be back to normal in the land of advertising and SC & Partners. (Is that what they’re called now? I can’t keep track.) Bert is gone, Jim Cutler is disappeared and the McCann men have restored the power balance back to Don and Roger – with healthy slices of Pete, Ken, Joan, Ted and Peggy. It feels good to have survived all that turmoil.

For Peggy, still frustrated in her single-ness, it’s still all about the work. No one questions her skills at advertising anymore – well, at least not anyone from within the company. (More on that later.) She awkwardly gets set up on a date with Mathis’ brother-in-law and struggles to explain how she’s gotten to where she is without a college degree (or male genitalia; this part goes unsaid). Still, she has a ball and talks herself into leaving for Paris on a whim with her date. Why not? Doesn’t she deserve it? The hangover the next morning reminds her only of the reckless or unwanted choices she could have made. She’s here now, better live with it.

Likewise Ken, our knight in shining armour, is put through a wringer (you better believe I’ll have more on that later). He gets fired for walking out on McCann with millions of dollars of billing and finds himself at an existential loss. These Irish McCann guys remember this stuff, apparently. Still, he has to acknowledge that it’s a sign, a potential opportunity to change things up again. Ken doesn’t appear to be troubled by death just yet. He’s still thinking about the life not lived.

Speaking of the life not lived, now we get to Don. He’s back to his old self at work and at play, e.g. naps in the office and booty calls are involved. But he dreams of Rachel Menken (remember her?) and meets a waitress he swears to know from somewhere else. All these women of Don’s past representing paths he could have taken – some good, some bad, but here he is. Don decides to re-walk a path and see Rachel again, forgetting that it is much more difficult to walk backwards. Rachel is dead from leukemia, and as her sister tells Don, she lived the life she wanted. She essentially wards Don off, oh it’s this guy, the one who can’t make up his mind. The sister keeps cool, but it’s clear she has no time for Don.

That strange waitress that Don meets and, uh, gets to know, mentions that when people die, that’s when things get mixed up. It rings true, but it only encompasses some of the truth. All these characters have been “mixed up” by the death of something – a relationship, a job, a west coast life (Pete recalls his time in LA as a dream). Don’s been walking along that line of oblivion for awhile now, trying to find answers from the beyond. His dreams these days always feel like some kind of sign, like something more. But he’s still living his one life, just like the rest of these characters. Even with six episodes left now, Don is only left to ask: Is that all there is?

How are we going to avoid talking about those ridiculous moustaches on Roger and Ted? Week after week, we may be back here recounting their exploits. How do they get any work done? Look, it takes a serious facial hair effort to make Stan look like the reasonable one in the office. I was re-reading the description of this section and two key words jump out: anachronistic and historical. Which category do the moustaches fall into?

On the one hand, to see Roger first amble over to the table in that diner with a full-on sarsaparilla soaker was quite something. It jolted you out of the ordinary even if, in our lives of irony, we see moustaches like that all time. On the other hand was Ted with his own monstrosity, trying to fit in to an era that’s passed him by (or maybe I’m projecting). Out of place versus historical value. Let’s call it a toss up and just acknowledge that we’ve got six more episodes of these two cowboys working their facial muscles as far as they’ll go.

The reason why Ken gets his own section, in case you need a reminder, is because he’s the one character who sometimes feels happy. In fact, for most of Mad Men, Ken has been downright pleasant. There’s been very little jealousy, cut-eye or out and out anger. Ken works his job, loves his family and has a sideline hobby (writing) that stimulates his mind. It’s a good life.

To kick off the final run of episodes, we got a Ken special. He was up, he was down, he ran through a gamut of emotion we could not have predicted or foreseen. So much of what has happened with Ken over the last few seasons of Mad Men has felt random, undeserved. What’s more, he’s become a punch line – what with the tap-dancing and the eyepatch. It’s so hard to take him seriously. But Ken perseveres. And this time, just as the random events seem to be lining up against him, Ken flips the paradigm and ends up where you’d least expect. Let’s go to the next section for the blow-by-blow.

Round 1: Ken stops by Topaz meeting after tension in the room has reached his peak. Someone compares Harry Crane to Mr. Potato Head. This advertising life won’t get Ken down.

Round 2: Ken and family give his father-in-law some golf clubs as a retirement gift. Said father-in-law provides some interesting insider information (this may prove to be a valuable haymaker later). Life is a rich pageant of moments.

Round 3: Ken fights with his wife. She says he is not living his dream – there’s talk of a novel, of life on a farm, of a different existence. Things get too real for me. The advertising life is working some serious combinations right now.

Round 4: Ken is fired! Upper cuts, devastation, the canvas rushes up to greet a reeling Ken.

Round 5: Ken meets with Pete, who, as you would expect, makes Ken’s firing all about him. Can you believe all the extra work Pete’s gonna have to take care of now that his friend has been shit-canned? Consider this the standing eight count moment. Ken’s not going out like that.

Round 6: Ken uses the info he got from his father-in-law to get a job with DOW Chemical and become a huge client of his former bosses. What a late round surge. This beatdown is complete.

Between bouts of drinking, sometimes the people of Madison Avenue actually do some work on advertisements. Here is where we sit in the seat of the client, trying to figure out what the hell these ad guys are talking about.

The Topaz pantyhose guys, forever unhappy and out-of-touch, feel like they’re losing their marketshare to L’eggs, a cheap brand. Naturally, it’s a sky is falling scenario for them and the immediate reaction is to push out a knock-off ad as soon as possible. Fortunately, Peggy and Joan preach patience – new creative is what’s needed.

That mission puts Peggy and Joan in a room with three men from the department store world. They want to get Topaz a leg-up (sorry) by pushing the product into the classier world of Macy’s and the like. These two ladies know a thing or two about re-branding into a better market. But watching Peggy and Joan calmly try to maintain their air of professionalism while these three proto-dude bros employ all sorts of innuendo really is as soul crushing as it sounds. The advertising world is still hostile to women no matter who’s involved. Even though Peggy and Joan have a sound plan, they don’t get the respect they deserve. The anger they turn to afterwards – including Peggy unpacking the classic “if you’re going to dress like that” line on Joan – feels especially painful. All this anguish for a drug store brand of pantyhose! 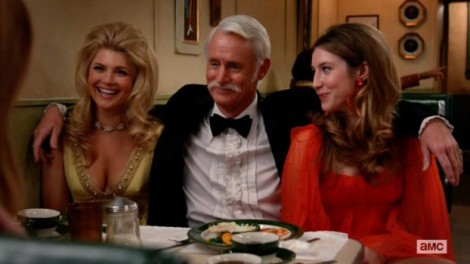 I can’t believe there will only be seven more willfully opaque “On the Next Episode of Mad Men” promos. Life will just not be the same without them. For one, the percentage of clarity in the world will go up; the time I waste trying to decipher what these little tidbits mean will be spent on something more productive; and we’ll no longer get to hear lines like, “So you just get on a plane and fly to Los Angeles?” anymore.

Six promos left. What are we supposed to do with ourselves once they’re gone?