Welcome to the final stretch of the Mad Men Monday Recap. A show as deep as this one needs some diverse commentary so jump in and enjoy our irreverent breakdown of each episode. 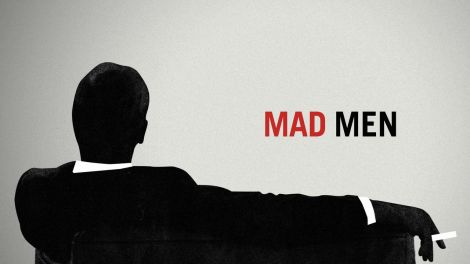 It is worth taking a minute to discuss what happened in each episode. If you’re looking for some straight talk on what we just saw on Mad Men, read this section (and then read the other sections because, why not).

This week was a disjointed episode of Mad Men but it starts in a very familiar place. There’s Don in the kitchen making milkshakes for his sons. Betty, who’s going back to school for Psychology (can you imagine?), and Henry roll in to sweep Don away. We get a look back at the nuclear family Don tossed aside. The realness of it looks so simple in retrospect, but everything Don gets involved in ends up a mess.

From there we get two split narratives with Don, one a long story of divorce with all the amicable dealings going south, the other a mysterious and doomed tryst to nowhere. First, Megan. She’s right to be upset but wants to deal with Don fairly and move on. Her career is still very important to her. Megan has never quite debased herself, even though she keeps asking for money from Don, and even if it has cost her opportunities in that career. When she meets Harry for lunch we expect the worst. And right on cue, there’s Harry quick to meet our lowered (at this point below the earth’s surface) expectations. What a cretin. That he then spins back to Don to warn him of Megan’s “crazy” talk is even worse. It’s fair to cheer when Don subtly calls him out on his shit. You merely adopted the lies, Harry. Don was born in them.

Don’s relationship with Diana the waitress is also constructed out of untruths. Don wants to believe everything she’s telling him. He’s ready to throw himself into a future with this weary woman. She’s not all upwardly mobile and expectant like Betty, nor is she fresh faced and eager like Megan. (And her husband doesn’t live in the same building as with Sylvia.) Diana looks to have seen some things – even if those things were over in Racine, Wisconsin; even if those things involve a dead daughter; even if those things involve a second daughter, and a ranch house, and a two car garage, and a husband. Diana knows she can’t live this lie. In that way she’s probably less tragic than Don. She knows she has to leave her dumpy room and go back to that old life. It’s true.

The model for marriage Megan grew up with his her parents’ unhappy union. Having survived her lunch with Harry, with her career officially flailing, Megan gets to walk in on her mom and Roger alone in her former apartment; both have buttons left undone. The lie of her parents’ marriage has finally come true but she doesn’t look particularly happy about it. To Megan, Roger is just a more playful version of Don – aging, sloppy and lying.

Don meanwhile attempts to heal Megan the only way he has left: by giving her money. Megan figures the one million dollar cheque is a joke. This is a lie that’s come true though. She seems suddenly indifferent to her family’s incessant struggle. And Don perhaps feels like he’s finally, finally done right by somebody. The jokes on him though. Now that Megan’s complete, Don’s left with nothing. Not even the furniture.

Who is Marlin Perkins? I know that’s what you’d like to know.

In a back and forth with Don, Roger cracks wise saying he “feels like Marlin Perkins is chasing him on the Savannah. Hiding is pointless.” It’s a reference to Roger’s sudden influx of secretaries, now doubled to two (to go with his three telephones). Of course, for Roger this means more headaches, more miscommunication, and more people to lie to regarding his whereabouts. All this and neither secretary seems particularly bed-able for Roger. What a shame.

Anyway, Marlin Perkins. Around the time Roger was making his joke, Perkins was in his most visible role as the host of the nature show Wild Kingdom. Before that he hosted Zoo Parade, which I think we can all agree is a pretty dope name for a TV show. In many ways, Perkins’ programs were the precursors to those late night talk show segments where animal experts talk about funky creatures, and, in a way, he was the grandfather to other TV personalities like Jack Hanna and Steve Irwin.

All this and Perkins once went on an expedition in 1960 to the Himalayas with Sir Edmund Hillary in search of the Yeti. Sounds like a full life.

Where would you put the odds that Ken will be back before the end of the season? He’s been through a lot but I doubt we’ve seen the last of his eye patch. I’m up at 75 percent. We need more Cosgrove.

Don’t the Calvets just seem like the very best family to be a part of? In the showdown this week, we’ve got ourselves a good ol’family feud. Our combatants are four: Papa Emile Calvet is off in Quebec where he’s presumably miserable. Mama Marie Calvet has decided to live vicariously through her daughter’s divorce, of all things, by strip-mining the apartment Megan shared with Don and taking back everything she feels Megan (as her surrogate) deserves. Then there’s the sister, Marie-France who wishes everyone would cry and be sad and feel guilty like her. Mama Calvet decides to run off with Roger (though she tells him to “take advantage” of her, so yeah), and Marie-France is pretty torn up about it. She blames New York City for poisoning their mother, which is pretty laughable.

And Megan, well… she just got a one million dollar cheque from Don. She is in peak “I don’t care” mode. I put that in quotes because Megan actually says it out loud. And damn, with a family like this, I can’t say I blame her.

Between bouts of drinking, sometimes the people of Madison Avenue actually do some work on advertisements. Here is where we sit in the seat of the client, trying to figure out what the hell these ad guys are talking about.

While we like to get swept up in the beautiful work on Mad Men, we know it is just trying to sell us pantyhose or rain coats or slideshow projectors. Our man Stan says he tries to treat each project like art, even though they’re just trying to sell something. Guest photographer Samantha “Pima” Ryan reminds him that all art is selling something. Stan, his engine thoroughly revved, reminds her that no, quite literally, they are selling something. This time out it’s Cinzano Vermouth.

There’s an amazing triangular sequence of events here: Pima, as seductively played by Mimi Rogers, basically strolls into the Sterling-Cooper universe, interacts with Stan and Peggy for two seconds and completely figures their dynamic out. She wants Stan to do her bidding, so she flatters him a bit and makes moves. When Stan’s at home he’s all “I do everything, I’m an Art Director” but in Pima’s hands he’s putty. Likewise, when Pima asserts herself with Peggy in a bid for more control in creative direction, she effortlessly undermines Peggy, works with the power of suggestion and presents a confident womanly front.

But then again, this is advertising; we see a set, and models (who are apparently toothy), and some finished work. We know they’re selling something. It can be a cut-throat world. Having eventually seen through Pima’s methods, Peggy informs Stan they will not be hiring her again. In short, Peggy’s not buying it. 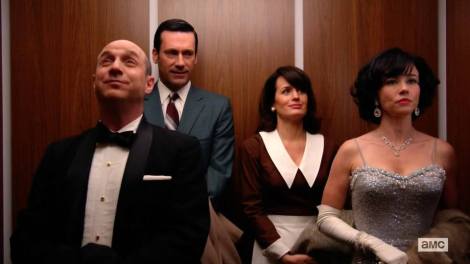 How many times have you wanted to say it? All together now: Pete, what are you doing?

Peggy says this as she marches down the hall of their offices, looking ready to tear Pete a new one. What has he done? What is left for him to do? Did he end up bringing a floozy out to a client dinner? Was he caught on the golf course with rented clubs?

My God, Pete: what are you doing?