Last August, I spilled a lot of digital ink in this space about the uncertain future of the venerable and beloved Japanese anime production house Studio Ghibli. If I can be so bold as to quote myself, “[I] t seems certain that Ghibli has turned some form of corner,” I wrote, “and in a year’s time the studio will look nothing like it did in years past…”

Here we are then, almost a year later, and what could be the final film from the House that Miyazaki Built is making its way through North American cinemas. If When Marnie Was There is the note Studio Ghibli goes out on, it’s an almost defiantly sombre and problematic one, but not lacking for optimism.

Annie and Marnie in “When Marnie Was There”.

Based on the 1967 novel of the same name by Joan G. Robinson, Marnie is the story of Anna, a 12-year-old girl living in a loving foster home after the death of her parents. Anna longs for love and connection with the people in her life, but her frequent asthma attacks and social anxiety cause her to isolate herself. (She admits in voiceover that she hates herself.) After one such episode, Anna’s foster mother Yoriko decides to send her to the seaside home of her relatives, in the hopes the clear air will relieve her ailments. While exploring an abandoned mansion on the other side of a lake, Anna becomes trapped on the property after high tide rolls in. Hitching a ride back with a local fisherman, she has visions of the mansion lit up and full of Gatsby-ian revelry, and of a girl with long blonde hair being brushed by a nanny in an upstairs window. Over the course of the film, Anna becomes preoccupied with and befriends Marnie, the blonde girl in the window, who may or may not be a ghost.[1]

When Marnie Was There is one of the few Ghibli projects made with no involvement from either of its legendary founders Hayao Miyazaki and Isao Takahata.[2] As with many other Ghibli films, director Hiromasa Yonebayashi (The Secret World of Arrietty) uses character designs modeled after Miyazaki’s art style, something I’ve never fully understood. I’m certain it’s done out of respect and honour for the founder, but it’s always felt like playing dress up with Dad’s clothes. And if the marquee attraction isn’t in the production, why draw attention to that fact from the opening frame? It invites the audience to consider how the movie would have been different (or improved) if Miyazaki had directed it.

Less problematic is Miyazaki’s influence on the film’s attention to detail in backgrounds, setting, and character. As with all Ghibli films, Marnie is utterly beautiful to take in. Moments given to details like the sun shining on the waxy skin of a swollen, ripened tomato; ducklings ruffling the water from their feathers on the shoreline or the way a falling rain gradually darkens a concrete stair are welcome touches that immerse the viewer in the coastal village where the film takes place. The movie also takes care to give even the most minor characters a personality, from the mute fisherman Toichi, to Hisako, a local artist as enamoured with the old mansion as Anna is, to Anna’s relatives the Oiwas, who are just delightful, if maybe a little lax in their supervisory policy.[3]

Marnie is of a similar mind as earlier works from Ghibli like My Neighbor Totoro or Kiki’s Delivery Service. The stakes are relatively low and there isn’t much in terms of plot or rising action; these films aim to envelop a viewer in the beauty found in the mundanity of the everyday. But it never quite reaches the levels of charm found in those other works, mostly in part due to the title character.

Marnie is meant to be the person who teaches Anna to love herself, but the relationship between them never really feels genuine. Part of this is the animation (as Marnie dances with Anna after a party, a moment meant to be touching, she giggles but her face remains frozen in a blank and unsettling rictus) and part of it is the dialogue (when she starts calling Anna her “precious secret,” and telling her how much she loves her, I expected Chris Hansen to emerge from behind a pillar)[4]. Conversely, Sayaka, the daughter of the family renovating Marnie’s mansion who shows up halfway through the movie and also befriends Anna, is funny and charismatic, kind-hearted and wilful. If the movie had just been ninety minutes of Sayaka and Anna getting to know each other, shooting the shit without all the otherworldly diversions, that would have been fine by me.[5] Their relationship feels much more authentic and is much more entertaining, than that of Anna and Marnie. 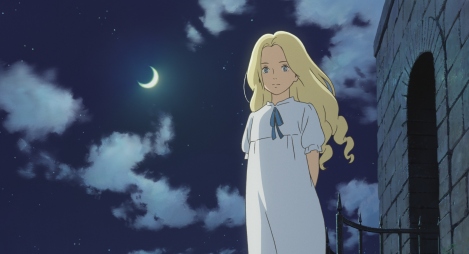 This is ultimately what makes the film so frustrating: everything else is more interesting than the Marnie-Anna relationship, which is what the whole movie is supposed to hinge on. When Anna finally gets to attend one of the parties thrown by Marnie’s parents (whether in a dream or otherworldly hallucination is unclear), we get only the briefest moment to enjoy it before the two girls run out to a patio so they can have a moment. Even in the film’s final moments, when it has the opportunity to leave just the tiniest smidge of ambiguity regarding the connection between Anna and Marnie, it barges in and smacks you with a sledgehammer while screaming, “Do you get it?! Do you see what’s happening here?!?”

Really, though, I’m a 36-year-old North American man quibbling with a movie aimed at pre-teen Japanese girls, so maybe I just need to manage my goddamned expectations. Watching a Ghibli movie is always preferable to not watching a Ghibli movie, even the second-string offerings we don’t immediately think of.[6]  When Marnie Was There is never going to be anyone’s favourite Ghibli offering, but it’s a noble attempt that, despite not fully connecting on every idea, should leave any fan confident in the studio’s future, whatever shape that future might take.

“When Marnie Was There” is currently playing at the TIFF Bell Lightbox. Check the schedule here.

[1] But most certainly is, a fact the film tries to muddy, but is obvious to everyone who isn’t named Anna.

[2] Third-man Toshio Suzuki is credited as a producer.

[3] Seriously: Anna insults a local girl and is found unconscious on the side of the road at least three times in a hundred-minute movie, but the Oiwas are always like, ‘Welp, what can you do? Kids, amirite?’

[4] Full disclosure: I saw the English dub; some of these problems may be less prevalent in the original Japanese audio.

[5] Someone start a Kickstarter for this movie.

[6] And it’s not like the Big Two didn’t have some work in that list, too, real talk. I stan for Porco Rosso or My Neighbors the Yamadas as much as anyone, but they’re no Nausicaa or Grave of the Fireflies.