My first impression of Tame Impala shouldn’t qualify me for the rest of what you’re about to read, but here it is anyway.

Early in 2013, I skipped along to “Elephant” when it was the backing track to the Blackberry Z10 campaign, a TV mainstay for those stuck with TSN as our sports network. Kevin Parker’s outfit was reportedly given $100,000 for the rights to the song, which, hey, isn’t something I would say no to either. I worry, though, that many got the same first impression I did: this “Tame Impala” was another mainstream indie outfit ready to knock out some radio hits with a 60’s revival sound.

So, that foolish opinion out of the way, it didn’t take too long to embrace “Elephant” as a marvellously produced rock track. It pounds and moves at a steady pace, but has more built on its foundation than the White Stripes’ “Seven Nation Army”. I have to thank Blackberry – for that reason, it makes for a great introduction to Kevin Parker’s perfectionism. 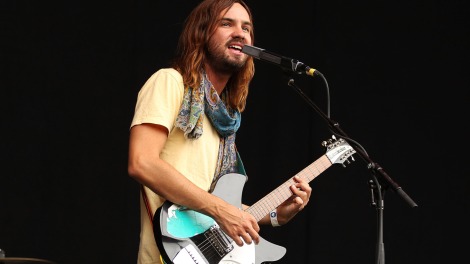 I moved on and up after that. I learned that Tame Impala was just Kevin Parker and a rotating outfit of musicians. I listened to “Feels Like We Only Go Backwards”. Then all of Lonerism. There was more going on with Parker’s music then just reviving the late-Beatles John Lennon sound that fits his voice. On that 2012 release, he took kaleidoscopic rock so damn seriously that it came out pristine, so earnest in its layering that you had to take it seriously. It was way more than a Blackberry campaign, far more timeless than the phone it peddled.

All signs say that Parker could’ve milked the Lonerism sound for all it was worth, following the arc of a post-White Stripes Jack White, jamming away with variations on the same tempo and melody. Any premonition of that happening were gone, though, when “Let It Happen” first surfaced late last year.

Man, “Let It Happen”. Seven minutes long, it’s a thudding, starry disco track with production that would make an EDM head blush. The drum and bass tracking are the heroes, as the guitar of Lonerism quickly becomes a distant afterthought. Filters are turned up, misty synths wash over, and Parker punches the repeat button in a two-minute breakdown that’s as rewarding as anything on Jamie xx’s In Colour.

“Let It Happen” sets the stage for what we hear on Currents, but as a lead track and single, it is somewhat of an outlier on its own stage. The album itself is a much steeper climb, with the pop creations of “Elephant” and “Feels Like…” nowhere to be found.

That’s not to say there’s no light at the end of the tunnel. Currents is paced beautifully, with geeky psychedelia like “Nangs” often coupled with bouncier cuts like “The Moment” (the best earworm chorus on the album). With standouts “Cause I’m A Man”, “Past Life”, and “The Moment” spaced out, the album peaks and valleys perfectly; especially great because, on the first couple listens, the medium tempo could make it easy to gloss over.

The emotional content matches the evolving sound. With the guitar gone, we get more of Parker’s voice in the mix, and he uses it to showcase the best writing of his career.  On “Yes I’m Changing”, Parker observes his breakup with Melody’s Echo Chamber and his changing art directly with lines like these:

And even if I wanted I wouldn’t know how

Another version of myself I think I found, at last

And I can’t always hide away

It’s simple, but matches the nursery rhyme melody of the song nicely. Those simple melodies are prevalent everywhere, but layers of sound take depth to extreme levels.

Looking at this sound evolution, Currents has an inescapable bond with another album where a rock band stripped itself down to explore new sounds: Radiohead’s Kid A. In the wake of OK Computer’s success, Thom Yorke and company opted to explore new sounds rather than tread on a similar path. They too stripped the guitar from their sound, flexing an electronic muscle that had always been present in their music to create one of the singular albums of the last 20 years.

Sound familiar? Kevin Parker may not show the variation in production on Currents as you hear on Kid A, but the self-exploration through electronic production absolutely runs parallel. Currents is a more challenging album than Lonerism as a result, but it is Parker working at his absolute peak.

The kaleidoscope remains intact in Tame Impala’s sound. The person behind the viewfinder has changed though, creating an all-new experience that still feels familiar. Only Kevin Parker could come up with an album like Currents, and we’re all better for it.