In the summer of 2010, the cable network AMC launched its third new series titled Rubicon. After Mad Men in 2007 and Breaking Bad in 2008, Rubicon was expected to further the legacy of quality AMC had been quick to establish. Instead, after one season, it was cancelled.

Due to a cool public response, Rubicon‘s first season was beset by low ratings. The online buzz, which can inflate a show’s perceived cultural value, only declined as the season went on. The lone bit of Rubicon news to gain traction? It’s showrunner and creator, Jason Horwitch, was deposed around the time the pilot aired. Henry Bromell, the show’s executive producer whose chief claim to fame at the time was producing some Homicide: Life on the Street episodes 15 years earlier, took over. Rubicon was deemed a turkey from day one.

The forgotten cast of Rubicon.

The thing of it is: Rubicon should have been a success. It has a sharp modern aesthetic and taps into an unexplored sector of contemporary life. The show introduces us to Will Travers (James Badge Dale), an intelligence analyst working for a think tank in New York City. Will is brilliant but also troubled–he was supposed to meet his wife and daughter at the World Trade Centre on 9/11. The absence of the towers looms large over the show. Will spends his days pouring over files–transcripts, documents, intercepts, images–that constitute the bulk of intelligence work at the turn of the century. When the US military decides to shoot a missile at a specific building in a remote part of the world, it’s guys like Will who decide if the target is worth annihilating (and what the collateral damage may be). Far from TV’s usual guns-and-sex portrayal of spy craft, Rubicon instead opens a window into the lives of the “little” people in the War on Terror. We meet the rest of Will’s analyst co-workers (including the dearly departed Christopher Evan Welsh), his secretive bosses, and his genial father-in-law mentor, whose mysterious death in the first episode cranks up our hero’s involvement in the show’s central conspiracy.

Right, but then there’s the conspiracy. Rubicon, at Horwitch’s behest, is tied to a shadowy conspiracy plot inspired by 70s thrillers like The Parallax View and Three Days of the Condor. There is a place for these kinds of stories that tap into the paranoia and unease of an age. When mishandled, however, conspiracy plots can set their audience adrift. To that end, Rubicon has messages sent through crossword puzzles, a curious suicide, and a lot of concerned facial expressions from actors David Rasche and Arliss Howard who may or may not be in a secret society; later, people get killed. The show’s plot longs for an audience to ask after the who and why–it gets saddled mostly with “huh?” Despite this, when Rubicon drew its focus to Will’s team of intelligence analysts, when we got to see them work, the show could soar. This was life in the real post-9/11 world; the background conspiracy plot only dated and numbed the effect.

Fortunately, five years later, there’s a new show out there doing a modern conspiracy story right. It too is set in the modern era, but instead of post-9/11, it deals in post-Occupy. It counts Christian Slater among its unlikely cast members, at times looks like a Kubrick film, pulses with a John Carpenter-esque score and has a main character who does morphine and keeps a ragged running commentary in his head.[1]

This show is called Mr. Robot. 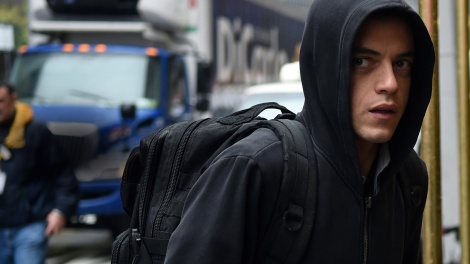 Rami Malek as Elliot Alderson on the trail of Mr. Robot.

In USA’s Mr. Robot, we meet Elliot Alderson (Rami Malek), a computer security expert by day who acts as a hacker vigilante by night. Elliot is brilliant and troubled. He’s frustrated with society, angry that a huge corporation called E Corp runs most of the world, and unhappy because his father died while working for said behemoth. (Elliot refers to it as Evil Corp relentlessly.) He lives alone in a bad neighbourhood in NYC and spends most of his time struggling to maintain the wall between his daytime life and his night time activities. He’s also in love with his best (and only) friend, Angela (Portia Doubleday). It’s a tough life.

Mr. Robot is the brainchild of Sam Esmail. Forgive yourself if you’ve never heard the name, a quick browse of his IMDB page reveals there isn’t much to know. Esmail is previously credited with writing two films and directing one. He arrives on the TV scene sui generis. There’s no story of him under the tutelage of a storied TV creator; Esmail just is. And what he has wrought here with Mr. Robot is beguiling, exciting, nimble and, despite the sometimes nervy subject matter, fun.

The fun starts with the show’s central performance. As Elliot, Malek personifies the restless energy of this new decade. He keeps his eyes wide and his hoodie low; he instinctively distrusts everyone. Through his hacking efforts, Elliot is also usually proven right–everyone is hiding something. The voice running over top of Mr. Robot is Elliot’s inner id. It is also the audience’s guide into the scary tech world of encryption, data dumps, hacker attacks and digital revolution. Like Rubicon, the margins of the show are filled with shadowy men in suits; Elliot’s paranoia is well-earned.

But also rumbling in the background is the presence of the aforementioned Slater as the titular character. Clad in an old flight jacket and trucker cap, Slater appears as if out of time. He needs Elliot to help him with his plan to bring down Evil Corp and, as a result, remake the world. There’s a running joke out there about Slater’s touch of death on a string of hopeful TV shows. Over the last decade he’s been in a handful that never made it far. With Mr. Robot he’s found his calling. Slater appears as part sage and part protester. Most importantly, his character is fully alive. We’re prepared to follow him down whatever rabbit hole he dives us into.

Mr. Robot is just five episodes in so many of the details are still to be drawn. What’s been established is the tone and energy of the plot. We are made to understand the players–the staff at the company Elliot works for, his neighbours and the curious members of Mr. Robot’s underground hacker uprising. There’s a loose feeling of The Matrix here (Alderson sounds an awful lot like Anderson) and cute callbacks to everybody’s favourite techno nightmares (the chief antagonist is named Tyrell for god’s sakes)[2]. But these little tweaks don’t feel superficial. Instead, it’s as if Esmail and his crew are winking at us, inviting us into their little conspiracy. They’re confident we’ll want to follow along.

Perhaps that’s the lesson Rubicon could never learn. While that show was mired in the hole of the WTC, Mr. Robot finds a wild freedom in what was built in its place. While Rubicon looked at newspapers, Mr. Robot scours the internet. As a result, it manages quite the feat: Mr. Robot is the show of today, right now, and also, the future.

[2] I’m also not entirely convinced that Slater isn’t some kind of Tyler Durden-like figure in the mind’s eye of Elliot.