By the end of the third week, it’s safe to make some assumptions about your team. If you’re sitting at 3-0, you can assume that you’ve gotten off to a strong start, your coaching staff and/or key players are probably returning from last year, and your starting quarterback is still standing. The Patriots, Packers, Bengals, Broncos, Panthers, Falcons, and Cardinals must be feeling pretty positive right now, as they seem to be clicking on all cylinders,

If you’re 2-1, that’s a comfortable place to be right now. Maybe an opening day loss to a tough opponent before righting the ship, or dealing with transitions in coaching or personnel accounted for the loss, but for the most part, you’re playing well.

If you’re 0-3, you might as well cash in your chips and walk away. The Ravens, Saints, Bears, and Lions all sit at that undistinguished mark, and all have major injury or coaching issues to address. Only three teams have ever made the playoffs after starting 0-3, and only one after starting 0-4. Should you be worried if your team is 0-3? Probably, but at least you’re getting let down early and can start thinking about your favourite hockey or basketball team.

What about 1-2? That is the contentious spot, where hope is still alive and well, but the gears are far from clicking. Some 1-2 teams have more to worry about than others, but all have work to do.

Andrew Luck will be just fine, you guys.

The entire division sits at 1-2 after week 3, but not all 1-2 records are created equal. The Colts, the reigning AFC runner-up, skid into Sunday’s game against the Titans at 0-2 and with real questions about their offense. After barely scraping by with a 35-33 win, the Colts still have questions, but they are notorious slow starters. The Titans, for their part, have been showing a lot of life under Marcus Mariota and could easily have been 2-1 and atop the division at this point. They have the only offense in the division worth discussing. The Jags were trampled by the Patriots, and the Texans generated just enough offense to squeak past the Tampa Bay Buccaneers, though will often struggle to beat better teams.

Should the AFC South be worried? Colts? Naw. Titans? Hell naw. Jaguars and Texans? Yes, their 1-2 records are much truer indicators of what probably will be 4-12 seasons.

Three of the four teams in this division are sitting at 1-2; The Eagles, the Giants, and Washington. None of these teams have been all that bad, either. New York’s point differential is +6, Washington sits at -4, and the Eagles bring up the rear at just -5. Besides, the Giants really could have and should have won at least one of their games, if not both. As always, the NFC East will be the most competitive division in football.

Should the NFC East be worried? Tony Romo’s clavicle injury keeps the door open, at least slightly, but the Giants need to stop coughing up games, while the Eagles and Washington have serious questions about their respective offenses. The only thing worrying about the NFC East is that one of these teams might go 10-6 and miss the playoffs.

Will Eli and the Giants figure things out?

Well, other than the brilliant Arizona Cardinals, of course. The St. Louis Rams and San Francisco 49ers both started their seasons with victories before starting their losing streaks. Neither have looked very impressive, either. The defending NFC champions, the Seahawks, have looked better than their record indicates, with close losses to St. Louis and the Packers. Ten points to the Packers counts as a close loss. With a point differential of + 13 (helped massively by a 26-0 shutout of the reeling Bears), the Seahawks will right the ship before too long.

Should the NFC West be worried? The Seahawks will be fine. But I’d be worried about lining up against the Arizona Cardinals right now, regardless of who is on my roster.

After losing big last night to the Packers, the Chiefs dropped to 1-2 but have a nearly even point differential and can boast a bevy of healthy offensive weapons, including Jamaal Charles and Travis Kelce. Their losses came against two tough teams in the Denver Broncos and Packers, so it’s not as if they’ve been falling to sub-par teams. With upcoming games against the Bears and Lions, the Chiefs should be able to turn things around shortly.

Should the Chiefs be worried? Nothing but good vibes here, despite last night.

Alex Smith and the Chiefs will be better, soon

As quarterback Jameis Winston settles into his role and adjusts to NFL defenses, things will start looking up in Tampa. Doug Martin, Mike Evans, Vincent Jackson and Austin Seferian-Jenkins provide enough offensive options for the young quarterback to work with, and the defense has found a nice groove after Week 1’s embarrassing loss to the Titans. Even if they only end up with 5 wins or so, having a young franchise quarterback should leave everyone pretty satisfied.

Should the Buccaneers be worried? Naw, man, good times are just starting. Winston looks like a solid pro at the very least so far.

The Browns’ best move might be to make the switch to Johnny Manziel permanent. Manziel is a mobile, bold quarterback with some decent downfield accuracy. The Browns are young, and have gone a long time since being an exciting, interesting team for the casual observer. I think they’re getting there, though.

Should the Browns be worried? Not really. This was pretty much expected, and another year for the quarterback situation to settle could be a good thing, what with the insanely-talented Josh Gordon sitting on the sidelines. 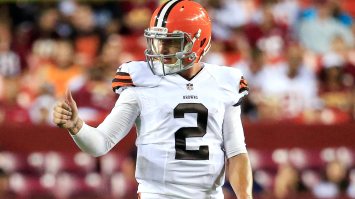 Johnny Football could be a difference maker in Cleveland

Recently, Adrian Peterson compared Chargers’ rookie running back Melvin Gordon to a younger version of himself. That’s high praise, and one that Chargers fans and coaches must be excited about. Quarterback Philip Rivers has managed to avoid injury thus far, despite a patchwork offensive line, but that luck may not hold as the QB injury bug continues to spread across the league. On the other hand, they’ve been held to less than 20 points in their two losses, and don’t really seem to have the passing game necessary to give Gordon the space he needs to rush.

Should the Chargers be worried? A little. The Raiders are sitting above .500, and could have the makings of a decent team, while the Broncos continue to dazzle and the Chiefs will definitely be better. This might be the year when the perennially .500 Chargers go over a cliff and begin a big rebuild. Or, they might go 9-7 again.

The Dolphins began strong with a win over the Washington football team, but are winless in the state of Florida this season after losing in Jacksonville and at home to the Buffalo Bills. The offense is absolutely on the skids, which is inexcusable given the stability in coaching and quarterback, and the return of left tackle Branden Albert from last season’s knee injury. Granted, a lot of turnover at receiver at tight end could take a few weeks to smooth out, but even the usually stable running game has looked shaky, and the supposedly improved run defense with Ndamukong Suh just allowed 112 yards on just 9 carries to Bills’ rookie Karlos Williams. After opening the bank vault for Suh and veteran receiver Greg Jennings, the results so far have been rather underwhelming.

Should the Dolphins be worried? Yes. Very worried. I know I am. Go Dolphins. 😦 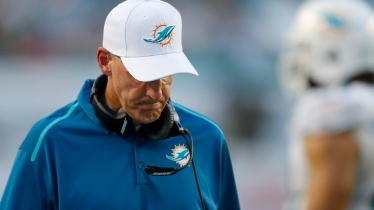 Should we be worried?.

Peyton Manning getting comfortable in the pistol formation. Something about old dogs and new tricks, right? Manning has been calling his shots from the gun since his Tennessee days, so why would new coach Gary Kubiak look to switch things up now, as his quarterback is probably in his final season. Switching back to the pistol, Manning looks sharper, his throws are cleaner, and the Broncos offense is humming. Sometimes, the best thing a coach can do, is just get out of their players’ way.

My less-than-triumphant return to Draft Kings. Earlier this summer, I wrote about my fantasy baseball time on DraftKings, the daily fantasy sports site whose ads you’ve probably seen everywhere by now. Sunday morning, I decided to give football a go. I staked ten dollars on a few different lineups, mostly focusing on gathering players from one particular powerful offense. I had a Patriots-heavy lineup, a Steelers-heavy one, a Packers-heavy one, and a general “I think this one looks good” one. You can probably guess what happened. It was nice knowing you, ten dollars. I am never trying daily fantasy sports again. Until next week.

Another quarterback bites the dust. Ben Roethlisberger went down to an ugly-looking knee injury, and will miss 4-6 weeks. This is some kind of crazy cluster bad luck for the quarterback position this year. Quarterback sacks are down on average from last year, but the hits that are coming are causing more damage, or just poorly placed.

AJ Green would kindly like to remind you that he’s still one of the league’s top five wide receivers, in case you forgot.