It’s hard not to wonder how they do it. I’m thinking of all those people, stacked inside dark, airless looking rooms, sunlight coming in through only the highest of windows or not at all. They clock in every day, sometimes even working overtime, and for what? To work as part of a system, the criminal justice system, that just keeps grinding, grinding and grinding on. This is before we even address the criminals themselves. It’s a tough life all around. 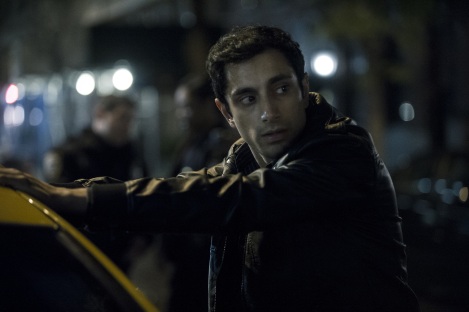 HBO’s latest mini-series The Night Of does something rather rare in the annals of TV drama, and particularly in police procedurals. It makes time for all of it, all of the little cogs in the wheel that get a person from one place (a crime scene) to another (the courtroom) to yet another (jail). There is drama here; a gruesomely murdered woman and a mystery at the core of things. But the effectiveness of the story is not in theatrics, but in the minutiae, the little details. It’s in the lawyer, John Stone (effortlessly played by John Turturro), getting a congrats from a judge on a job well done. It’s in the desk sergeant who only looks into the eyes of his questioners if he has to. It’s in the inhaler carried by the accused, or the transvestite hooker who keeps popping up in the same cell. Each detail has its own little story, only some of which will be told perhaps, but there, present. This is how life works after all. It’s a story too big for a mere eight hours — the episode run for The Night Of — and yet it doesn’t matter. The explosion of details is part of the point.

The Night Of does not quite begin on some insane high note of crime. We are not invited into a heart of darkness. Instead, it opens on Nasir Khan (the perfectly cast and comically underrated Riz Ahmed), a college student and tutor. He’s been invited to a party by the basketball team; this isn’t a chance that comes along often for soft-spoken tutors who live in Queens with their unassuming Pakistani family (featuring a father and mother played by Peyman Moaadi and Poorna Jagannathan). On a desperate lark, Nasir takes his father’s cab into the city to get to the party. Due to a series of misunderstandings, and a pair of alluring eyes in the beautiful face of Andrea (Sofia Black-D’Elia, in peak cipher mode), he never makes it, instead ending up in an apartment with a dead body and the murder weapon in his pocket. It’s a bad trip, one that seems both shakily possible and wildly out of character for poor Nasir. Before we’ve even seen the cuffs go on, however, we’ve already been introduced to patrolling cops, clerks and various other witnesses and riff-raff. More threads are left to dangle, each one alive with possibility.

Enter our law and order team, here represented by Detective Box (a brilliantly unassuming Bill Camp) and the aforementioned lawyer Stone, tasked with corralling it all. For the pilot episode, we watch Box work, his studious eye gradually piecing together the facts, as he sees them. After a late introduction, the second episode spends more time with Stone with his trips up and down the subway line to hopeless hearings and conferences in cells. He’s got eczema on his feet so bad he has to wear sandals, a fact which plays as a punchline. These two work as part of the same system, but stand, curiously, on opposite ends of the legal spectrum. They both dance with and around the truth. How this all works is as fascinating, if not more so, than why it works or why it’s even happening. Nasir’s case, the dead body, is a pretext for an examination of everything that girds our society’s sense of right and wrong, of justice. Not in a philosophical sense, mind you (though there’s that too), but in a suspenseful nuts and bolts, here’s-how-the-sausage-gets-made way. You’ll need a strong stomach to look at the murder scene, but need to be stronger still to watch the rest unravel.

John Stone (John Turturro) advises his client to shut up.

If you’ve read the books of Richard Price, one of the creators of The Night Of along with Steven Zaillian, this should all sound somewhat familiar. Price has been writing screenplays since the 80s, he worked on the classic show The Wire (the gold standard for crime, police and detail-dense shows), and has written novels like Lush Life (a personal favourite) and, most recently, The Whites. His work is characterized by a few things: a sprawling, intricate picture of New York City across its boroughs, the fine-tuned dialogue of work-a-day pros operating within their little fiefdoms, and, yes, an attention to detail — in situation, in setting, and in character. Like his creations, Price does not miss much. The pleasure of watching The Night Of is in seeing the means and methods by which all of this information is presented, dealt with and filed away for later use. As dedicated as Price’s lead detective Box appears to be, he’s still just a man who has to trudge to a file cabinet, or up and down stairs; a man who has to stay up 56 hours straight as his case balloons and grows more complicated. Price manages the difficult task of introducing us to all of this story, while also not holding our hand. Only two episodes in, dozens of characters have marched across the screen. Somehow, we can grasp it all even as the puzzle pieces remain very much scattered across the floor.

There is no clear path towards a solution here. The Night Of remains very much opaque in its narrative developments. Undoubtedly there are questions; who is that guy who saw the thing? What happened to the two witnesses, one of whom may have lied about something? What happened in the life of the victim to make them the way they were? I’m trying to be as vague as possible here to avoid spoilers, but I should mention that that’s not really the point either. The Night Of is not a stone-cold whodunnit. It is not building up, Hercule Poirot-style, towards some grand reveal. I doubt Detective Box or the Lawyer Stone will find the single thing that will win or lose the case for them. To wait for that sort of climax is to miss the files for the cabinet, to confuse the facts for the truth. Price knows this, which is what makes his storytelling so compelling. The subject matter is grim, but its discovery is a joy. It’s hard not to wonder how he does it.